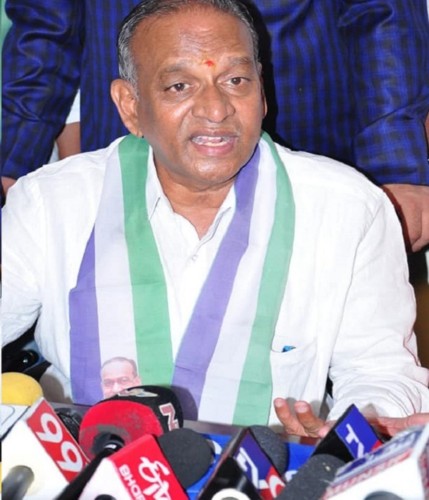 Telangana is going to witness the birth of yet another dalit-oriented political front soon with the unique combination of several political parties combined to fight against the power and dynasty pilitics.

Retired High Court Judge B Chandra Kumar, the president of the recently launched Telangana Prajala Party (TPP) and who, sometime back started Telangana Praja Vedika to fight on public and dalit problems in the State, is spearheading the process of new front’s launch.

According to him, Bahujan Samaj Party, Samajwadi Party, Lok Satta Party, Telangana Labour Party, Majlis Bachao Tehreek and others will be a part of the proposed front. Talks are under progress with as many as 12 likeminded organisations.

Speaking to #KhabarLive here on the occasion of state party office inauguration, Justice Chandra Kumar informed that the front will come into existence within a couple of months. Its main objective will be developing an alternate political system with policies anchored in welfare and growth of marginalised sections.

The TPP wants to end political corruption, ensure free and quality health and education to all and to turn agriculture a profitable venture. “We will join hands with every organisation and party that believes in that philosophy,” he said.

Regarding the scope of working with Telangana Jana Samithi (TJS), founded by M Kodandaram, the TPP president said they are ready to work with the TJS, provided it shall work on its own and abstain from joining hands with parties like Congress, BJP or any other.

“For us, the TRS, Congress, BJP or TDP are all the same. There is no difference between them in terms of policies as they are all based on feudal minded policies. We are not ready to join hands with anyone of them or who works with them,” Chandra Kumar ascertained.

He further informed that the TPP is going to contest in ensuing gram panchayat (GP) elections and also Assembly and Lok Sabha elections. For GP elections, selection of candidates is underway. Youth with service motto and who wants to fight corruption are being encouraged to contest.

The TPP is mainly focusing on adivasi areas though it will contest in other places as well. Chandra Kumar, who hails from erstwhile Adilabad district, claimed they got strength in areas like Adilabad, Bhadrachalam, Mahbubnagar, Medak and Jayashanker Bhupalpally.

The party workers are being trained and there is a good response to the party’ membership drive and recently the TPP state party office is opened in Hyderabad. “We may be small in terms of strength, but our objective is to bring in a qualitative change in the present political system,” he maintained. #KhabarLive

The ‘Bad And Ugly’ Truths Behind ‘Irrigation Projects’ In Telangana

The Tale Of Two Political Titans With Religion Boundaries In Secular...

Why ‘Money And Muscle’ Still Rule In ‘Indian Politics’?