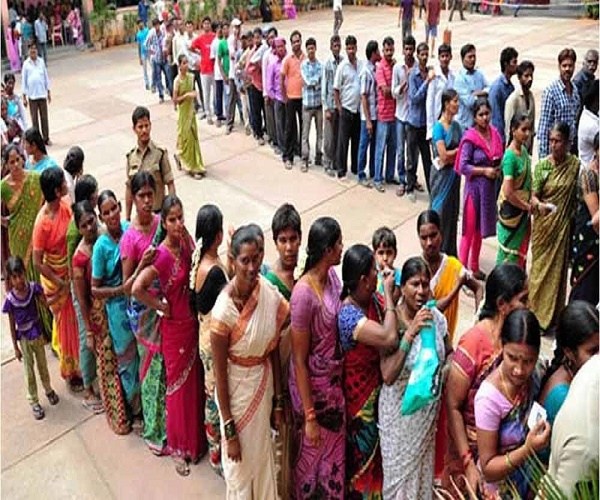 Telangana recorded 52.9 per cent polling across 17 Lok Sabha constituencies of the State where former Union minister Renuka Chowdhury and AIMIM chief Asaduddin Owaisi are among prominent candidates in the fray as voting progessed peacefully. Zaheerabad recorded highest number of voter turnout with 63.39 per cent while Hyderabad from where AIMIM president Asaduddin Owaisi is seeking re-election registered 27.79 per cent till three pm, later it goes on voting spree.

A polling booth in Teeleru Village in Narayanpet district where ten women labourers were buried alive when loose soil and boulders fell on them Wednesday, wore a deserted look, according to reports. Apollo Hospitals Group Executive Vice Chairperson Shobana Kamineni Thursday said her name was missing in the voters’ list and described it as “worst day as an Indian citizen.” Rajat Kumar said as per the information he received from the Collector of Narayanpet district, large number of people are participating in the funeral of the deceased and polling is expected to pick up momentum during the second half of the day.

The official said 1.51 per cent of ballot units, 1.71 per cent of control units and 2.21 per cent of VVPATs were replaced during the mock polling before beginning of the actual polls in the morning. Polling in 16 constituencies began at 7 am, while voting process in Nizamabad started an hour later. Key candidates in the fray include Telangana Rashtra Samiti (TRS) president and chief minister K Chandrasekhar Rao’s daughter K Kavitha, former union minister Renuka Chowdhury and Owaisi.

Over 2.97 crore voters are eligible to exercise their franchise in the State, where 443 candidates are in the fray. In 13 Left Wing Extremism (LWE)-effected Assembly segments under five parliamentary constituencies polling is being held from 7 am to 4 pm. In Nizamabad Lok Sabha constituency, where 185 candidates, including more than 170 farmers, are in the fray, voting began from 8 am, as planned, as mock polling took more time compared to other constituencies in view of the large number of candidates and EVMs.

The contesting farmers are seeking to highlight their demand for remunerative price to turmeric and red jowar, and setting up of a Turmeric Board based in Nizamabad. Nizamabad witnessed 45.29 per cent voter turnout till three pm, according to officials. As many as 145 companies of central paramilitary forces, besides over 55,000 state police personnel have been deployed for security. #KhabarLive