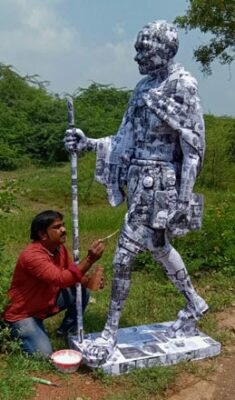 In a unique tribute to Mathma Gandhi on his 150th birthday, a noted Hyderabadi sculptor has made a seven-foot tall statue covered with paper.

Making it special, the sculptor, Hothi Baswaraj, used only A4 size photo copies of news reports, articles, his photographs, stamps and portraits printed on currency notes for making the statue.

Speaking to #KhabarLive, the Sculptor, who is a native of Nyalakal and lives at Chakripura in Hyderabad, said he got the idea a few months ago while reading a news article on Mahatma Gandhi’s 150th birthday.

Since then, Baswaraj, who did BFA from JNAFAU (Jawaharlal Nehru Architecture and Fine Arts University) and MFA (Creative Sculptures) from Mysore University, said that he had collected the digital newspaper clips and got print outs.

Saying that he had started the work four days ago, Baswaraj said he had used FRC (Fibre Reinforced Concrete) inside the Statue. The Sculptor had used 300 pages of newspaper clips. The weight of the statue is put at 35 kg. “The Statue will be put on display to mark Gandhi’s birth anniversary on October 2 at my studio at Chakripura,” Baswaraj said.

Baswaraj, who won the best district-level sculptor award on Telangana Formation Day on June 2 in 2018, has worked for TS Tourism Department on several prestigious projects such as Tribal Museum, Medaram, Tribal Museum, Jodeghat, Mannanur in Nallamala Forest and Srisailm and several other places. He has won several other awards during his 15 years career as a Sculptor. #KhabarLive