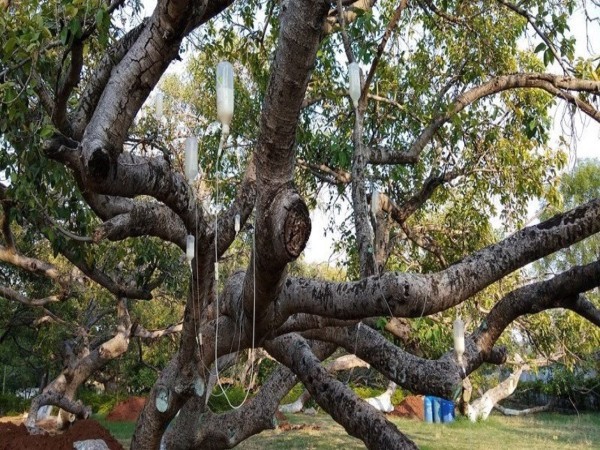 The world’s second largest Banyan tree in Pillalamarri of Mahabubnagar district in Telangana is on ‘saline drip’ now as part of the rejuvenation of the tree that is almost dying.

The 700-year-old ficus tree is now given treatment by injecting a diluted chemical to kill termite population that infested the tree.

As pumping of chemical into the stem failed, forest officials are infusing the chemical solution drop by drop using saline bottles similar to a saline drip given to patients in the hospital.

Termites had affected almost entire tree due to which parts of it are fallen, and it closed for tourists in December 2017.

Forest officials are infusing the chemical solution drop by drop using saline bottles similar to a saline drip given to patients in the hospital.

ALSO READ:  How Govt Financial Aid For Marginalised Students In Higher Education Is Being Choked?

Officials have put the saline drip of diluted chemical Chloropyrifos bottles numbering few hundreds for every two metres of the giant banyan tree.

Mahabubnagar District Forest Officer Chukka Ganga Reddy told KhabarLive, ”The tree is spread over more than three acres of land and part of it has fallen due to the decay of the roots and stem. With the expert opinion of retired IFS official Manoranjan Bhanja, we have started treatment and protection in three ways. We diluted the Chlorpyrifos chemical and started pushing it into the stem by keeping holes, but it didn’t work out. The solution was coming back instantly. Later we started injecting solution like a saline drip. This process has been effective. Secondly, we are watering the roots with the diluted solution to kill the termites. And in a physical method, we are building concrete structures to support the collapsing heavy branches”.

The tourists damaged the proper roots.

These roots are given also given artificial strength using pillars and pipes. Interestingly no enquiry is conducted into the negligence of the officials in protecting the tree heritage.

Till December the tree which is a huge tourist attraction in the district is being guarded by the Tourism department. The tourism department claimed that it tried to revive tree by using a chemical treatment, but it didn’t work. Forest department took back the protection of the tree and is now working on rejuvenating it. District collector Ronald Ross is personally monitoring the revival of the tree. District authorities barred tourists from visiting the Pillalamarri tree since December last year.

Ganga Reddy said,”The tree’s health is stable now. We are hoping it will become normal after a few days. We are also planning to open the site to the public after discussion with the higher officials, but this time people have to see it from a distance away from the barricades”.

Officials have put the saline drip of diluted chemical Chloropyrifos bottles numbering few hundreds for every two metres of the giant banyan tree.

Telangana Biodiversity Board scientist G Sailu told KhabarLive that the tree site cannot be declared as biodiversity heritage site as it is in reserve forest. The forest department shall give a heritage tree tag and conserve it. #KhabarLive

What Did The Astrological ‘Stars’ Says For ‘KCR And TRS’ In...