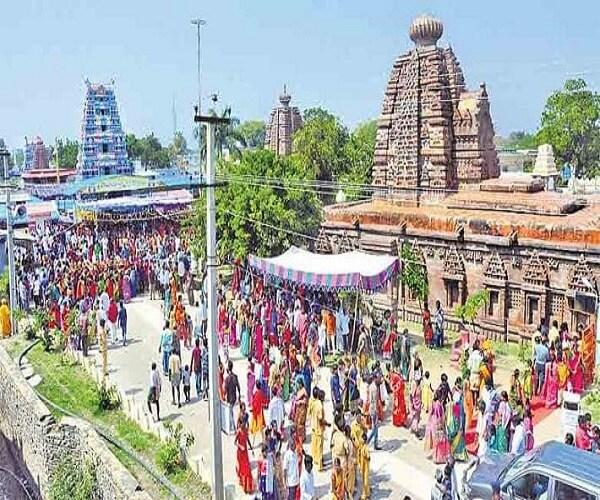 Religious places in Telangana are known for spectacular architecture, sculptures, arts and traditional designs ranging from small shrines under trees to temple complexes that contain smaller temples. One such popular heritage temple in the State is Jogulamba Devi Temple, Alampur.

Alampur is the meeting point of the rivers Tungabhadra and Krishna and referred to as Dakshina Kashi and the Western Gateway of Srisailam. The place is famous for Jogulamba Temple, Navabrahma temples and Sangameswara Temple built in 7th century.

Alampur Navabrahma temples include nine temples dedicated to Lord Shiva, which date back to the 7th century and were built by the Badami Chalukyas rulers who were patrons of art and architecture. These temples are significant for their intricate carvings of themes.

Considered one of the 18 Shakti Peethas in India, Jogulamba Temple attracts thousands of visitors every day. The principal deities at Alampur are Brahmeswara and Jogulamba. It is surrounded by the Nallamala hills. Alampur is considered historically as an important centre of the Chalukyas.

Tourists visiting this powerful Shakti Peetham can purchase many puja-related items and a range of divine literature available here apart from handicrafts made of river shells, utility items made with local stone carvings and small sculptures.

Interestingly, Alampur temples are listed as an archaeological and architectural treasure on the official ‘List of Monuments’ prepared by the Archaeological Survey of India under ‘The Ancient Monuments and Archaeological Sites and Remains Act’.

This historic temple stands as a testimony to Chalukya Art and Culture. It was also said that Brahma had performed a great penance at Alampur for thousands of years, and he pleased Lord Siva who conferred the powers of creation for him.

You can see goddess Jogulamba sitting on the corpse with scorpion, frog, and lizard on the head. She can be seen in a naked avatar with her tongue stretched outside, an avatar of fierce goddess that grants Siddhi in Yoga and hence called Jogulamba. This word is a changed form of Yogula Amma in Telugu which means Mother of Yogis.

The sacredness of Alampur temple has been mentioned in the Skanda Purana. The uniqueness of this group of temples lies in their plan and design in the northern architectural style introduced by the Chalukyas somewhere around AD 650 and 750.

How to reach
Alampur is located approximately 210 km from Hyderabad and easily accessible through Hyderabad-Bengaluru highway. Alampur Road is the nearest railway station located at a distance of nearly 9 km. According to Telangana Tourism, Haritha Hotel in Alampur offers quality food for tourists visiting this temple. There are other small restaurants located near the temple and along the highway. Tourists visiting the Shakti Peetham of Alampur can also opt for this hotel for hotel offers good accommodation.

Nearby places
Pillamarri: In between Hyderabad and Alampur, you can find Pillalamarri, an age-old tree, located around 3 km from the Mahabubnagar district headquarters. This great Banyan trees called Pillalamarri is artistry stoke of nature.

The tree, which is 700 years old, attracts many people. It earned its name Pillalamarri because it is spread into a lot of branches. Due to scores of branches, one cannot see the main trunk of the tree. It stands as a special attraction for the visitors touring the Mahabubnagar district. With its rising popularity, Tourism Department has set up a small exhibition centre here, wherein many statues and sculptures are exhibited.

Koilsagar Dam: It is a famous picnic spot in Mahabubnagar district, which is laid over Pedda Vagu River, a tributary of River Krishna. Enveloped within hills, this reservoir attracts thousands of tourists. Beside Koilsagar, there is Veerabadhra Temple called KoilKonda. Every year, there is a jathara held by nearby villagers. The place is located at 130 km from Alampur and 140 from Hyderabad.

Sri Ranganayaka Swamy Temple: Located at Srirangapuram village in Pebbair mandal of Mahabubnagar district and 160 km away from Hyderabad, the temple is an architectural marvel with huge gopurams and mandapams making the shrine captivating.

Surrounded by lush green and beautiful sacred water flow behind the temple, the classical Vijayanagara architecture is perfectly reflected in the construction of this temple. Visitors can reach Srirangapuram Sri Ranganayaka Swamy Temple by road from Pebbair, Kollapur or from Wanaparthy while Gadwal is the nearby railway station. #KhabarLive

Why KTR Resisting KCR’s List Of MLAs For Early Polls In...