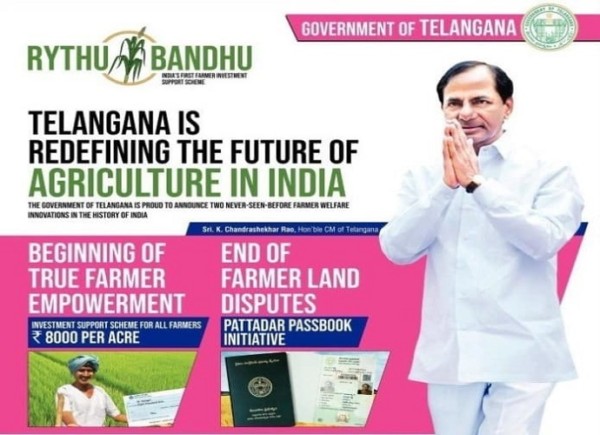 An audacious cash transfer is becoming the focus of a pitched election battle as Telangana heads to its first independent assembly polls. Under the Rythu Bandhu scheme, launched this May by Chief Minister K Chandrasekhar Rao of the ruling Telangana Rashtra Samiti, 52 lakh farmers will receive an annual transfer of Rs 8,000 per hectare for two crop seasons.

Although nominally intended as investment support for inputs like seeds and pesticides, the transfer is granted conditional only on land ownership. The TRS has heralded the scheme as an unprecedented farmer welfare innovation, while opposition parties like the Congress have lambasted it as “ointment for a patient who needs to undergo surgery”.

Which critiques are valid, and where does the Telangana government deserve credit? Producer support reforms are long overdue. According to an OECD-ICRIER analysis, the morass of India’s regulatory and infrastructural inefficiencies led to farmers receiving negative price support—an implicit tax—between 2000 and 2016. Telangana, in particular, has been ravaged by debt. A 2017 NABARD survey found it had the highest percentage of indebtedness in India, a fact unchanged from the 2013 All India Debt and Investment Survey.

The scheme, therefore, not only deserves praise for responding to the profound urgency of agrarian distress, but also doing so by setting aside the rusty toolkit of price interventions and trade restrictions. Several economists have described the advantages of direct income support in terms of its more effective policy design.

An ICRIER study found it significantly less distortionary than price-deficiency payments or minimum support prices, and recommended scaling it up nation-wide as a cost-effective intervention for stabilising farmer incomes. Former Chief Economic Adviser Arvind Subramanian struck a similar note, observing that the provision of uniform transfers across an easily identifiable category (landowners, in this case) makes Rythu Bandhu an example of an “embryonic quasi-UBI,” and potentially the future of agricultural policy in India.

Rythu Bandhu’s popularity isn’t limited to economists. Karnataka announced a similar scheme, Raita Belaku, earlier this year to give seven million dry land farmers Rs 5,000 per hectare. The Congress is reportedly contemplating a monthly transfer of Rs 3,000 to small and marginal farmer households in Madhya Pradesh, which heads to polls next month.

Skewed Toward Large Landowners
And yet the scheme can easily become another example of both campaigning and governing in poetry.

Its biggest lacuna is that it excludes tenant farmers that take land on lease for cultivation, comprising over a third of Telangana’s farming population.

The state government has thus far ruled out the possibility of tenant beneficiaries, with Chief Minister Rao remarking that the scheme “is not tenant Bandhu,” and that there is neither a legal rationale for offering support nor official government records that recognize tenant farmers. This is a double blow to a population that bears the highest burden of agricultural distress. According to a recent TISS survey of almost 700 Telangana families, 75 percent of farmer suicides in the past four years were by tenant cultivators.

A related limitation is the scheme’s regressive bias toward large landowners. As Credit Suisse has noted, the absence of a payment ceiling could create a peculiar situation where the 9 percent of landowners holding more than five acres of land accrue 34 percent of the scheme’s total payout.

Costing Rs 12,000 crore, the program forms 8 percent of Telangana’s budgeted expenditure for 2018-19. The government nonetheless raised close to Rs 10,000 crore from the central bank as a cushion of capital. As political promises grow more extravagant with polls inching closer—the TRS recently committed to increasing Rythu Bandhu benefits to Rs 10,000 per acre, along with a loan waiver up to Rs 1 lakh—the burden on the Telangana exchequer can only rise.

Where direct income support has been previously implemented in middle-income economies, it was introduced as part of reform packages that phased out expensive input subsidies and price supports. Understandably for an election year, the Telangana government has not made the hard choices involved in rolling back existing farmer support schemes, and instead delivered Rythu Bandhu benefits as a supplement. This political economy needle is waiting to be threaded before fiscal gains are realised.

Reorienting The Scheme
With less than a year having passed since the program was introduced, this election constitutes a critical juncture for Rythu Bandhu. A revisionist approach to charting its future should involve a reexamination of two key features.

First, is there an administratively feasible method of identifying tenant farmers and including them in the program? One possibility involves using the possession of Loan Eligibility Cards (LECs), issued under the Land Licensed Cultivators Act of 2011 that entitled tenants to credit, insurance, and subsidies, as an eligibility criterion for receiving benefits. The Act’s implementation has been extremely anemic, hamstrung by limited awareness, landlords concerned about ownership rights being endangered, and banks reluctant to lend to tenants.

A CESS Hyderabad analysis, as well as the aforementioned TISS survey, found that only about 7 percent of tenant farmers received LECs in recent years (far fewer actually received a loan). In turn, current and expected Rythu Bandhu benefits could be used as a guarantee to allay bankers’ fears. When Mexico used cash transfers to compensate farmers affected by NAFTA in 1994, it was precisely the possibility of collateralising those payments that relaxed the credit constraints of the rural poor.

By combining forces, Rythu Bandhu and the Land Licensed Cultivators Act could together alleviate the government and market failures marginalising more than a million tenant farmers.

Second, preventing large farmers from cornering a significant share of the benefits requires an upper limit on the transfer amount. One option is to emulate Karnataka, which caps its per-acre subsidy at Rs 10,000 per farmer. Alternatives include establishing a maximum eligible land size (a feature of both Turkey and Mexico’s direct income support programs) or providing a smaller payout for each incremental unit beyond a certain acreage.

Beyond these more prosaic questions, Rythu Bandhu’s meta-challenge is to resolve the tensions between being a tool for poverty reduction to some, an agricultural investment support scheme to others, and a vote-winner to many. The lack of a clear alignment between the program’s design and purpose will blunt its long-run impact and sustainability, with claims of allocative efficiency ringing hollow if its distributional consequences vary dramatically. No matter which party wins in December, a vote for Rythu Bandhu will be wasted unless its architects make the right policy choices for realising its radical potential. #KhabarLive

Why Telangana Politicians Are Hankering For ‘Five-Star’ Rating In Elections?