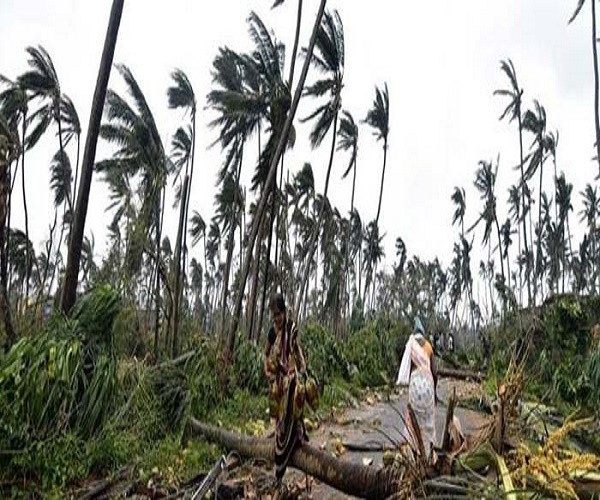 The people of Andhra Pradesh in general and the Titli hit region of Srikakulam in particular are very much part of this country and they are the legitimate citizens of the Republic of India. They are hurt, humiliated and disturbed to the extent that cannot be transferred in words.

Till date, though they have been living in the backward regions of the Northern Andhra Pradesh, they are replica of self-respect and self-esteem as they never shed tears for any help. Now, having lost everything and literally on the streets with their kith and kin, aged and infants, they are shattered and are eagerly waiting for the things to turn normalcy.

Titli is the worst ever cyclone that India has witnessed so far in the year 2018. Although it started as low pressure in the Indian Ocean on 6th of October, it gathered momentum as a very severe cyclonic storm by 9th of October.

The size and the scale of the devastation is massive and its effects are long lasting. Whatever the projections made by the regional media till now could be tip of the iceberg and the national media failed to pay any attention on the devastation of this size, which is eligible to be considered as the ‘National Calamity’ because as many as 10 lakh people in 1800 villages in Srikakulam district remained shelter less, and have lost their livelihood.

As per my primary assessment, the loss was equal to 7000 crore or more; it has destructed the homes, roads, communication system, water pipes, crops, plantations including cashew, banana, coconut, jack fruit, drumstick, mangoes, and papaya. The crops in 1.44 lakh hector worth of Rs 1000 crore was submerged; this includes paddy, which is the staple food for the people of this region in 1.36 lakh hectors.

3 lakh coconut trees were uprooted; 737 hectors of plantations, and horticulture equal to 3000 crore have been damaged completely due to the severe storm, wind and the rainfall. The loss incurred to the animal husbandry and fisheries was 1000 crore, and the infrastructure damage was equal to 2000 crore.

Had the loss been confined to the regular and seasonal crops like paddy and sugarcane, the farmers would have wait with a hope to recover it in a span of 3-6 months. The loss incurred here however is irreparable and long-lasting as it will take another 10-20 years for the long term crops like coconut, mango and cashew to start yielding the crop if planted today.

For sure I could say one thing that whatever estimation that can be made would not be sufficient enough to put it in words and numbers as it is insurmountable. It will take another 20 years for the families to recover and rebuild their lives. Except the concrete buildings, the houses built on mud with thatched or corrugated iron tops were all bulldozed.

Plantations and orchids are the real breadwinners for the people of this region as they consider them as part of their family with grown up children extending substantial yet, regular income. For them, this loss is equal to losing their kith and kin that would extend assistance during their retirement. Irrespective of the seasonal and market variations, the plantations and orchids have so far extended tremendous financial support for the otherwise backward districts of the state. The people of the region are lamenting as if they have lost their grown-up son or daughter that would be supportive for the rest of their life.

The district of Srikakulam is already partially empty due to labor migration for the last 30 years that have left this region for good in search of greener pasture. With the devastation that occurred today, it would be wiped off completely. There must be immediate measures to see that the people must stick to their native places and create a hope for their future employment and livelihood.

Even if the long-term crops like coconut, mango, or cashew saplings are planted afresh today; it may take another 20 years for them to reap the benefits. The government must offer 10 years long term aid to support and rebuild the Srikakulam and need to announce and establish eco-friendly industrial corridor of agriculture, food and marine.

The current loss has already exceeded the loss incurred by Hud hud toofan that hit the coastal regions of the state in the year 2014. At the time the loss was confined to the greenery and the ecology of the region. But the current damage is long-lasting as it is going to affect the livelihood of the people of the region belonging to fishing, salt farming, aquaculture, plantation, and horticulture communities.

The government must instill hope in the affected, by clearly stating that it remains with them for rebuilding their shattered lives. The government must make long term strategies to rebuild the lives shattered in the devastation by extending boats, nets, for the fishing communities. The salt farmers, horticulturists and the plantations should be rehabilitated thoroughly.

The media reports on the Titli and its aftermath did not project the exact loss incurred, as Srikakulum is a remote border area that has been neglected traditionally. The mainstream media at the national, regional and state levels along with the social media should gear up to take the woes of the people of this region so that the government at the center would react immediately with relief and aid

#KhabarLive spent about 10 days and toured about 1000 kms in cyclone affected areas with a view to extend relief, solidarity and concern to the people that have been affected both physically and psychologically. Literally experience their calamities and loss and have touched the every aspect of the grief and sorrow of the people of Srikakulam. #KhabarLive