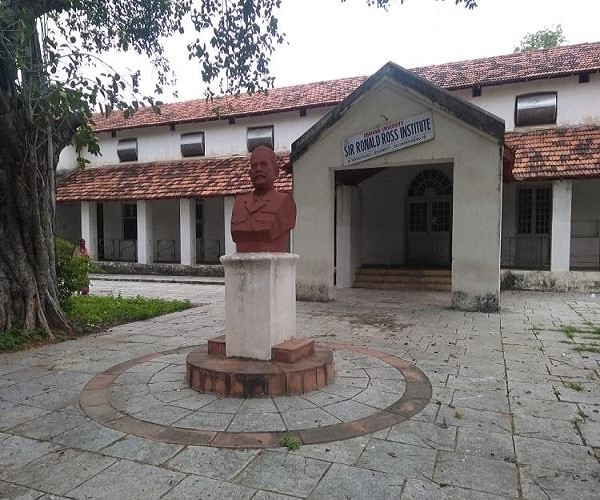 It is a matter of pride to be the home to a historic discovery made in the field of tropical diseases and medicines. Sadly, the Sir Ronald Ross Institute of Parasitology, where the scientist made the path-breaking discovery of the malarial parasite, lies tucked away in a secluded corner of Hyderabad, with the building lying unused for over ten years. Conservationists say they are caught between Osmania University — who own the institute — and the Airport Authority of India – who own the land.

The Sir Ronald Ross Institute of Parasitology is the heritage building where Sir Ronald Ross discovered the cause and remedy for malaria in 1897. Declared a protected monument by the Archaeological Survey of India, the institute is now under the protection of Osmania University (OU), who acquired it from the then Deccan Airlines in 1955.

“Research scholars from Osmania University worked here until the building was taken over by the Airports Authority of India. A pilot training centre was set up in this building. Former Prime Minister Rajiv Gandhi trained here. In 1979, Osmania University took over the building and continued research here. But now, the building lies deserted. Proposals of turning it into a research centre were put forward almost a decade ago,” says Veera Chary, president of Welltech foundation, a Secunderabad-based NGO.

While the building is now under the patronage of the OU, it is situated on land owned by the Airport Authority of India (AAI), as the Begumpet Airport is situated only a few miles away. Water supply was also disconnected by the AAI to curb illegal water tapping, which rendered the premises unusable. OU has reportedly been corresponding with the Civil Aviation Ministry for transfer of land since 1997, but it has not yielded results.

Conservationists allege that they are trapped in a tussle between OU and AAI and that conservation of the great facade has been thrust onto the shoulders of city-based heritage groups.

In January, the Welltech foundation filed a petition in the Hyderabad High Court, alleging that the higher education department, AAI, OU and the Greater Hyderabad Municipal Corporation (GHMC) were neglecting the structure.

“Being a heritage building, the Archaeological Survey of India had granted Rs 6.5 crores for its further development, but it could not materialise due to non-demarcation of the abutting land,” the petition filed by Veena Chary states. He further alleges that Osmania University has not given any funds for the development of the historic building and that the buck has been passed on to the state, who is equally uninterested in the welfare of the building.

“The building is under the lock and key most of the time and is unknown to the public. There are no proper facilities for visitors, or a guide who can take them through the museum. Proposals to turn it into a research centre for the students of IIT or an educational institute have been doing rounds for quite some time with no specific outcomes,” he alleges.

A visit to the institute makes the sad state of affairs abundantly clear. Located right opposite the Central Government Health Scheme Hospital (CGHS), the building still looks majestic despite its fading colours. Surrounded by dense foliage, the building looks just like an abandoned Victorian-era bungalow.

The institute has a watchman — the sole caretaker of the building that is sprawled across an area of more than 1,000 sq yards. Mohammad Yunus and his mother Ghousiya Begum live in a tiny shack inside the compound. Speaking to TNM, the 70-year-old woman says that she has been living inside the Institute for over 30 years.

“The shack where we live was the airport canteen before. When I first came here, there were students who were doing their PhD. Then, there were a few offices that functioned here. INTACH (Indian National Trust for Art and Cultural Heritage) also had a space of its own for a while. Now, the only person who comes here is the institute’s director from Osmania. I live here alone most of the time,” Ghousiya says.

Her elder son works at the CGHS hospital, while younger son Mohammed is now the gatekeeper of the institute. He gets paid a paltry sum by OU for being the watchman and maintaining the building compound. The family has also been caught in the tussle between AAI and OU, who say that their repeated requests for a water connection for their home has been turned down by authorities every single time.

“We used to get water from a neighbouring house by pulling a hose all across the length of the building. Mohammad found it difficult as he had to wade through the thick forest to plug the connection. Later, we started taking water from the hospital early in the morning at the time of Azaan. But now, the watchman there restricts us from entering and allows us to take water only once in a day,” Ghousiya says.

Pointing at an almost-empty barrel, Ghousiya says that is all the water she has for washing and cooking for the day. “It’s really difficult during summers. We sometimes collect water from the municipality taps on the roadside. Sometimes, I take bath only once in 4 days,” she 70-year-old says.

It’s usually Mohammed or Ghousiya who take guide the visitors who come to see the museum. It’s only because of this family that the institute still remains clean and safeguarded.

“There were people who used to come and pick logs from the surroundings, and even wood from the roof of the building. But after it was renovated and painted three years ago, we see fewer people coming into the compound,” Ghousiya says.

The building was revamped twice in the past, both times due to the efforts of the INTACH activists.

The institute’s director, B Reddya Naik, rubbishes allegations and says that Osmania University has been quite active in the maintenance of the heritage building.

“The institute is always accessible and opened to visitors till 6 in the evening. All media reports regarding funds and negligence are fabricated and written with malafide intentions. Though Rs 6.5 crore was sanctioned earlier by the Archaeological Survey of India for an approach road, we could not use it as AAI denied permission. There are certain reasons, which cannot be disclosed, due to which the institute has not yet being opened up for research,” he said. #KhabarLive