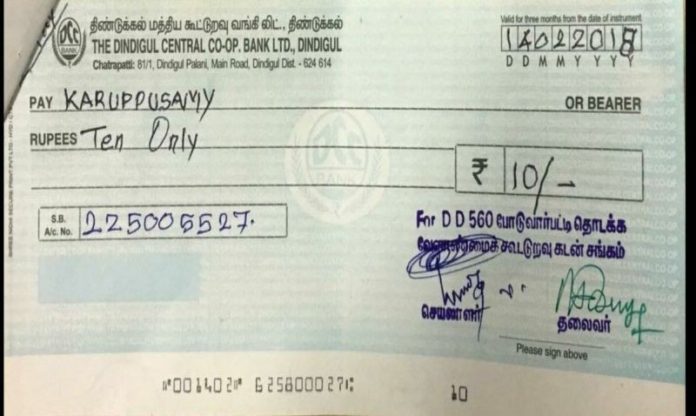 Farmers of Tamil Nadu continue to be at the receiving end of an indifferent and callous state. After paying huge premiums of Rs 212 for corn, and Rs 482 for cotton, farmers received crop insurance cheques of Rs 5, Rs 7 and Rs 10 in many parts of the state under the Prime Ministers scheme Pradhan Mantri Fasal Bima Yojana.

Karuppu Samy, Manivannan, Thangaraj and other farmers belonging to villages Manjanaicken Patti, Poduvar Patti, Kalipatti in the Oddanchatram taluk of Dindigul district in the state of Tamil Nadu received the cheques of Rs.5, Rs.10 and Rs.20 for the failure of crops like corn and cotton being distributed by the private insurance companies and state cooperative banks.

P.Ayyakannu, president, National South Indian River Interlinking Agriculturist Association. told The Citizen, “the issue of cheques of Rs.5, Rs.10 as crop insurance amount shows the farmers are being looked upon as slaves and second class citizens in the country. The state and central governments give scant respect for the issues of farmers in the era of corporatization and privatization of agriculture”.

S.Ranganathan, general secretary, Tamil Nadu Cauvery Delta Farmers Association, told this writer, “Issuing of cheques for Rs.5, Rs.10 as crop insurance amount is fooling the farmers”. He added, “When the stage-wise crop insurance was announced in the year 2016, we were happy, but now we find that we could not understand the exact method of calculating the compensation. There is no clarity among farmers, insurance officials and government officials about the scheme”.

Jeeva Kumar, advocate and activist from Thanjavur told The Citizen, “Distribution of cheques of Rs.5, Rs10 and Rs20 isridiculing the dignity of farmers. The state and central governments are boasting about the scheme. But, the crop insurance scheme has failed in its objectives as the assessment and implementation is an erroneous one. It needs drastic course correction”.

Kakkarai Sukumaran, vice president of Joint Tamil Nadu Farmers Association was categorical, “It is a humiliation and an insult to farmers and our profession”. He added, “The state and central governments have taken us for granted as we are a fragmented group without any cohesiveness and unity. This has happened because of the private insurance companies, they have collected premium from the farmers running into crores, apart from delaying the disbursal of amount, they are issuing the cheques for a meagre amount making a mockery of the farming community”.

Alagi Annan from Chatira Patti, Oddanchatram Taluk of Dindigul district paid the premium of Rs 112 for his Jowar(Sorghum) crop, but not yet received the insurance amount for crop failure because of drought. He is now worried and as he told this writer, now he is no longer sure whether he will be compensated despite paying the premium.

There were numerous protests in the various parts of the state for the delayed disbursal of the crop insurance amount by the concerned authorities. Now, the meagre amount has further aggravated the situation. Opposition DMK took the AIADMK government to task in the state Assembly recently. Finally the Ministers of the ruling dispensation in Tamil Nadu claimed that these insulting amounts were “clerical mistakes” and promised to rectify this soon.

ALSO READ:  A Khadi Office Opened By Gandhi In 1925 Is Dying, Much Like His Legacy

But the various studies and reports have pointed to the abject failure of the scheme at the implementation level in various states of India, Tamil Nadu is no exception.

Despite the flawed nature of this central scheme as observed by the policy experts, the state governmwent has not taken farmers into confidence inspite of their prolonged protests at the national and state levels. More than 400 farmers committed suicide or died out of shock after the failed crops within a year, but the AIADMK government shamelessly claimed in the Supreme Court that no farmer has committed suicide in the state on account of the drought. The insurance scam has come as a double whammy for the distressed agrarian community in Tamil Nadu. #KhabarLive