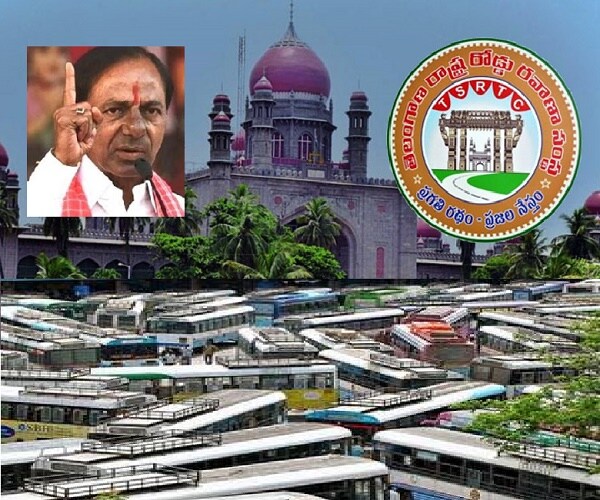 At the heart of the matter is revenue for the state government, and the welfare of employees – and the two interests seem to be at loggerheads. As K Neeraja was working as a bus conductor with the Telangana State Road Transport Corporation (TSRTC) for the last four years. Attached to the Sathupally depot in Khammam district, she allegedly killed herself at her residence in Kaviraja Nagar on Monday morning, a day after celebrating Deepavali with her two children.

Neeraja is the latest casualty – the fourth employee of the TSRTC who killed herself in the last one month, after over 48,000 of her colleagues went on strike, demanding that the corporation be merged with the Telangana government. Surender Goud, Srinivas Reddy and Surender Reddy killed themselves in separate incidents, as their salaries for September were not paid, and the state government dubbed them ‘self-dismissed’ for deciding to go on strike.

The protests have also led to major inconvenience to commuters, mainly students and office goers, as the state government is presently operating only skeletal services, by hiring temporary drivers and conductors. As the strike enters its 25th day, why are the RTC workers protesting and how is the state government responding?

What are the Demands?
The TSRTC is a state-owned public utility, which presently functions as an autonomous body with permanent employees; which means that while the state government owns the buses, the corporation is responsible for maintenance and upkeep, besides ensuring that they make profits.

The protest is being led by a Joint Action Committee (JAC) of the RTC employees’ unions, who have banded together, and released a list of 26 clear demands – including merger with the state government. The decision to go on strike came after several employees complained of long working hours and tremendous work pressure to meet targets, besides irregular salary disbursal and a lack of new recruitments, which was forcing them to work double shifts, with no extra pay. They say that the TSRTC should be run as a service by the state government instead, and not go after profits.

Meanwhile, in the neighbouring state of Andhra Pradesh, Chief Minister Jagan Mohan Reddy accepted the long-pending demand and merged the state’s RTC into the government. This served as an impetus for employees of the TSRTC to make the same demand of their government.

Besides merger into the state government, the demands include pay revision, due since 2017; job security; and filling up of vacancies. The increasing cost of diesel was also highlighted.

The JAC has said that the state government reimbursed only Rs 710 crore to the corporation, as against Rs 2,700 crore that had been claimed for the last five years (2014-2019). This amount is due to the RTC, as reimbursement for providing free and concessionary bus passes to students, journalists, police staff on certain duties, senior citizens and persons with disabilities.

It also demanded maternity benefits for women employees, and said that several old buses, that were unfit to ply the roads, should be replaced.

Why KCR becomes stubborn?
Chief Minister K Chandrasekhar Rao for his part has remained adamant that he will not succumb to the protests and has repeatedly refused to hold talks with the striking workers.

In his latest press conference earlier this week after his party’s win in the Huzurnagar bye-poll, KCR told reporters, “It is a gone case. TSRTC itself is shutting down. What is there to stop the strike?”

Refusing to consider their demand of a merger, he went on to say, “As long as the Earth exists, TSRTC won’t be merged. If we merge them, 57 more corporations will come forward with the same demand and the court will ask, when you have merged TSRTC with the government, why can’t you merge them?”

“If they want to chop their own legs, why should I stop (them)?” he asked, in a crass display of insensitivity.

HC intervenes but talks fail
Not everyone has been as averse as KCR when it comes to holding talks with the JAC. KCR’s close confidant, K Keshava Rao, had earlier written an open letter offering to mediate the negotiations.

Just earlier this week, talks with TSRTC officials and the JAC had failed, but leaders of the JAC had expressed readiness for another round of talks, if invited. The JAC found fault with the corporation, as the management confined the meeting to 21 demands, instead of all 26.

The government has also set up a committee of TSRTC officials to look into the demands, except the merger, which has already submitted its report to the state.

The state govt’s proposal
The state government for its part, has put forward a trifurcation proposal.

The state government’s plan notes that there are 10,400 buses running in the state, out of which half – 5,200 – will be run by the TSRTC exclusively. Another 3,100 buses (30%) would be taken on hire and would be run privately, but under the supervision of the corporation. The final 20% of the demand would be met by private players, the state government hopes.

However, JAC leaders say that this would be a death knell for TSRTC. They say it would pave the way for the complete privatisation and takeover of the RTC by private agencies, which will only put them in further jeopardy.

Opposition parties have also hit out at the proposal, alleging that KCR was pandering to business interests, and pointed out that public transport was for the welfare of the people, and not for profit.

However, it seems that KCR is unwavering on his decision as he reiterated in his recent press meet, that a decision would soon be taken, on granting 7,000 private bus permits, in a few days. This would involve buses already in the TSRTC fleet being privatised, besides paving way for new private buses to ply on the road.

Blaming the union for the situation, he hinted that the government would go ahead with privatisation of the corporation.

As the deadlock continues, the striking workers, who were already under distress, continue to suffer the most. #KhabarLive

Why ‘Marriage’ Becomes A Challenge For ‘Over Qualified’ Muslim Women In...

And, They Don’t Really Care About Us