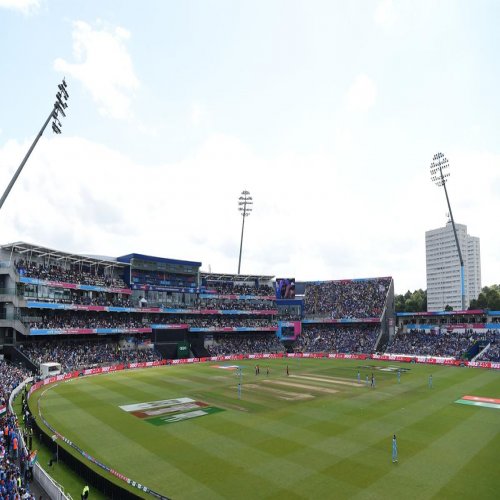 This is sport’s new normal, and playing without fans and the atmosphere they create is just another thing to get used to for athletes.

After months of all sport being shut down due to the coronavirus pandemic, the last few weeks has seen the full-fledged return of top-flight football in Europe. International cricket is soon to follow with a Test series in England the pro tennis circuit is set to resume in August.

But even as sport has returned, spectators will have to wait.

Football, cricket, Formula 1, the US Open, NBA will all be played behind closed doors as the threat of the disease is still very much there. Matches are planned in biosecure venues, players and support staff are wearing masks and everyone is tested regularly.

This is sport’s new normal, and playing without fans and the atmosphere they create is just another thing to get used to. Several top players have spoken about the potential impact of playing in empty stadiums and the general consensus is that sport won’t be the same.

Virat Kohli said the atmosphere will be missed.

“I honestly don’t know how everyone is going to take that because we all are used to playing in front of so many passionate fans. Things will still go on, but I doubt that one will feel that magic happening inside because of the atmosphere that was created,” Kohli had said on Star Sports.

England’s World Cup winner Jofra Archer actually suggested playing crowd noises and simulation on speakers, something that tried in broadcast during Bundesliga games, which was the first European league to restart.

But seen from another angle, this situation is nothing new for sportspersons. Apart from the top tier of sporting events, very few sporting events have packed stadiums and cheering fans.

In many ways, competing without the crowds is what many Indian sportspersons are used to. Here’s what some of them had to say about the current situation:

*Anjum Chopra, cricket
If you’re talking about anything other than men’s cricket, I think everyone knows what it is to play with smaller crowd. Even in men’s cricket, barring international games that are played in near-packed stadiums, even domestic cricket is played with empty stands.

It is not the most encouraging sign. For example, an international or IPL game going on at Wankhede, you know when you walk in it’s going to be buzzing but when you walk into a domestic game you’ll see empty chairs. It’s obviously different, the atmosphere isn’t there… the energy you can get from the crowd is missing but to be fair when you start playing the game it does matter when you have the roar and the crowd behind you and you’re doing well. But sometimes as a player when you are just batting out there it’s just between the bowler and you. So that’s the activity you focus more on, not that you don’t focus on it other days. But that’s a different kind of a challenge and it’s just between you and the ball.

I have played in stadiums that have been packed by about 30,000 people, I have played with that kind of a crowd and also played to empty stadiums so we do know how it feels.

*Suryakumar Yadav, cricket
When a cricketer picks up the game as a kid, be it in India or abroad, they play without spectators only. Even when you progress to first-class cricket, there aren’t any people watching the games. So every player has plenty of experience in such conditions. Of course, because of the Indian Premier League even youngsters have got opportunities to play in front of huge crowds, but I don’t think it will be difficult to adapt to the new scenario. The inspiration to excel comes from within.

You’re alone while putting in the hard yards during practice, so it shouldn’t be difficult to find motivation while playing matches without audiences. We have gotten accustomed to having crowds when it comes to cricket, but we as players have to push hard and take it in our stride. Who would have thought we would have such a situation where people can’t get together, but if playing without spectators is essential for the health and safety of everyone involved, I’m all for it. A player’s body language is completely different when there is a crowd, the adrenaline and the vibe helps you push harder. Having said that, there is one advantage to playing without spectators.

In the IPL, for instance, we have brief strategic timeouts where we discuss gameplans. But often, that little time isn’t enough. If there is no crowd present, we will be able to communicate among ourselves and with the coaching staff much better. So that’s a plus.

*S Badrinath, cricket
I have the experience of playing in packed stadiums as well as ones that are empty. I can live with cricket happening behind closed doors in 2020, rather than the sport not happening at all. The atmosphere is the one thing that will be lost. Playing in a packed stadium creates huge energy for the players — when there is a six, or crucial over, or a nice delivery, or a great catch — the (lack of) crowd cheers will mean a little bit is definitely lost.

The home-and-away factor will also be huge. When you are playing in front of home fans, the support is something that gets you going and is a huge advantage. But that wouldn’t be the case anymore. The home-advantage situation might be neutralised. The way forward, however, is that if cricket can happen without crowds, it should go ahead in 2020. I don’t mind, as long as sport is happening and people can see their favourites playing out there.

*Yuki Bhambri, tennis
I think it will affect only maybe a few of the well… maybe the top 30 or 40. Higher ATP events are the Masters and the 500 Grand Slams, where you really see a lot of fans come in, but I don’t think tennis players, in particular, would really be unfazed by not having fans that I think they would rather if given the option of not playing. Just because no fans is better than playing without fans. I think everyone every single one of them would take your opportunity to go back and play and compete, even though it is without fans. So I don’t think it’s going to really make that much of a difference.

Yeah, but I think I you know, at some point they’ve all done it, we’ve all gone through the ranks and they’ve all minister from scratch played the ITF, the challengers, and then going into the ATP tour. So, I don’t think it’s going to be really a hard adjustment from for whatever period if, you know, that is an option.

*Ankita Raina, tennis
Personally I don’t feel closed doors will make any change because we have played matches where hardly there are any spectators but maybe for bigger players who are used to crowds it may or may not affect , I think it’s up to each individual. I think crowds everywhere in India and outside India are same, they come to enjoy the sport tennis and if the level of tennis is as per their expectations they really appreciate it.

*Adil Khan, football
It won’t affect a team’s performance but it will be a different feeling compared to before. When fans come on to the field, they provide a different energy, so players obviously won’t find that. I’ll say players shouldn’t force themselves to come out and play and get sick, so it’s better to stay home once everything gets sorted. It will be difficult for all teams for sure, especially when we will be playing our national team games. We will have a feeling of emptiness on the pitch given the fan support we’ve been receiving.

I don’t feel players’ motivation will be affected but we will miss the fans surely. Whether fans come to the stadium or not, we have to play our game. Nobody can take that motivation away from players, especially when they are playing for the national team or at a professional level. Motivation comes from within for the player but we will miss the energy from the crowd. The cheering, the chants and more. For players, coming back on the pitch will be a big motivation even though we don’t know when the season will resume.

I don’t think it will make a big difference as wherever you go, there will not be fans. The result will depend on the team who is performing well. The rules apply to everyone, not just for a particular team. It’s always an advantage when you play with your fans but in this situation, all teams will face the same issue.

*Chirag Shetty, badminton
Definitely playing in an empty stadium will be a whole lot different for all the sportsperson. Especially for badminton, places like Indonesia or any of the Superseries level tournament there is sizeable crowd and that motivates players. In places like Indonesia, there is 70-80% occupancy even for first round matches and that atmosphere will definitely be missing.