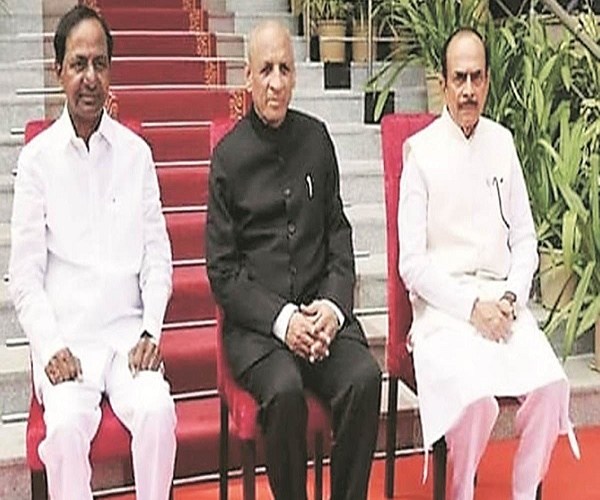 Leaders of the ruling Telangana Rashtra Samithi (TRS) can’t really put their finger on what is holding KCR back. The results, declared on December 11, had swept KCR back to power with a thumping majority of 88 of 119 seats.

They thought he would do it after the Pongal festival in January. Then, after his five-day yagya in January end. But the festival came and went, as did the ‘Maha Rudra Sahitha Sahasra Chandi Yagam’, and Telangana Chief Minister K Chandrashekar Rao did not expand his Cabinet. Two months on since he came to power, the state continues to be run by KCR with just one minister: Mohammed Mahmood Ali, holding the Home portfolio.

Leaders of the ruling Telangana Rashtra Samithi (TRS) can’t really put their finger on what is holding KCR back. The results, declared on December 11, had swept KCR back to power with a thumping majority of 88 of 119 seats. He took oath two days later with 66-year-old Ali, who was his revenue minister last time and is an MLC.

ALSO READ:  Why The Sudden 'Civic Sense' Takes A Knock In Hyderabad Citizens?

Telangana can have 18 ministers including the CM — 15 per cent of the 119-seat Assembly.

There have been no Cabinet meetings, with KCR running the show mostly through review meetings, of which there have been a dozen. In the meetings, held at his Pragathi Bhavan office-cum-residence, where he clears files of all the departments, all the officials concerned have to be present. Ali participates in some of these meetings, concerning the Home and Police Departments.

Some TRS sources say KCR is taking his time because he wants to “streamline departments”. “The CM wants all the related departments under one ministry, with one minister in-charge,” a former minister said.

TRS spokesperson Abid Rasool Khan reiterated this, adding, “There are 60 departments and Telangana can have 17 ministers apart from the CM. A committee of IAS officers is working to bring all related departments under one ministry. The Cabinet will be expanded once this exercise is over.”

According to other sources, KCR, who is known to be superstitious, is waiting for an “auspicious time”. But that theory took a dent when the CM let the time after the Pongal festival pass. As well as the yagya from January 21 to 25, held for “the welfare and well-being of people of Telangana”.

A senior TRS leader said KCR is “going slow” so as to not ruffle any feathers with hasty ministry allocation. The landslide victory has complicated his task with too many aspirants, and a lot many castes and factions to balance — while Ali is the Muslim face, the TRS got overwhelming support from SCs, STs and backward classes too. Sources say for the 16 ministry vacancies, there are more than 30 contenders.

Some others believe KCR is finalising candidates for the parliamentary elections, and would decide on the ministers after ensuring that the MLAs who get left out are placated with Lok Sabha tickets.

Finally, there are those who say the CM may be trying to lure Opposition MLAs, mainly from the Congress, which won 19 seats. A big incentive would be ministerial posts.

A weakened Opposition would also help the TRS in the parliamentary elections. A clean sweep, as the party hopes, would bolster KCR’s ambitions of playing a kingmaker at the Centre.

AICC spokesperson Sravan Dasoju said the delay in the Cabinet expansion showed that the KCR government was a one-man show. “Without ministers, to whom and where can people submit their grievances?… There is no respect for the Constitution. And the Governor (E S L Narasimhan) who is supposed to uphold the Constitution is not doing anything about it.”

Senior officials themselves claim the functioning of the government has not been affected. An offer who attend a recent review meeting said, “In South India bureaucrats can mostly run departments well even without a minister. The CM is taking care of all urgent matters. As far as I know, there is no pile-up of files or backlog.”

But that’s hardly solace for the ministerial hopefuls. Says one, “Only KCR knows why the delay.” #KhabarLive

When Autocrats, Theocrats And Lapsed Democrats Pose As Liberators Of Muslim...