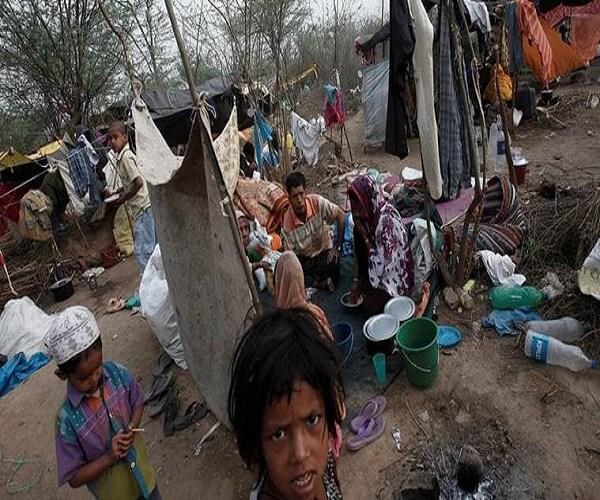 Amidst ongoing protests against the Citizenship Amendment Act and allied proposals by a generation with a “lost identity” branded as “infiltrators”, the government officially notified the act on January 10. The law targets both Rohingyas and Muslims in Hyderabad.

“They killed my father and brothers and burnt our house. We were forced to live the life of muhajirs (refugees)” says Noor Jahan, 25. She came first to Jammu and Kashmir and later settled in Hyderabad, living in the Balapur camp for the last five years.

When I saw first her, she was conversing in her native Bengali language – the Ruainnga dialect – with Sonali Begum, another destitute. Sonali’s name is the product of pure cross cultural homogeneity: ethnic Bengali Muslims residing in Myanmar.

These ghettoised slum area, quite distant from Charminar, an epicentre of protests resistance against the CAA, are asylum to 80 families or around 400 people fleeing ethnic persecution in Myanmar. These are Rohingyas residing in this squalid camp in Hyderabad for almost a decade. Most of them are well aware of the CAA.

While the entire country seems divided along a religious binary, these refugees being victims of racial segregation are living in harmony. There is a mosque and a temple within 20 yards’ distance in the same lane. The Balapur area Rohingyas camp serves as the melting pot of different communities united in times of distress, championing the composite culture of Hyderabad.

They are not Indians.

On January 3, Union Minister of State in the Prime Minister’s Office Jitendra Singh announced that the central government’s next step would be to deport these refugees.

Noor Jehan tells me what her camp leader said: “Now we will be considered illegal because the government will stop recognising UNHCR refugee cards.”

Her fear makes it clear that first to be affected by the CAA will be the Rohingyas, who are both immigrants and Muslims. They are the marginalised within a marginalised community.

Asked about the government’s decision to deport refugees, Noor says “I would rather die than go back to Arakan. Wahan sab kuch khatam ho gaya hai (There’s nothing left back there)”. Her downcast eyes say it all. The fear of deportation has been instilled inside the camp.

“I can only request the government to let us stay here,” says Mohammad Qasim, a 54 year old refugee from Rakhine state. For the last six years he has made a safe haven here – in a dilapidated shanty with a monthly rent of ₹800.

“I used to keep my domesticated animals in such shelters before they confiscated my property” he says.

Living conditions are miserable inside the camp, with poor sanitation and healthcare and no education facilities. The people here have poor employment opportunities and there is visible economic stratification.

The men perform precarious daily wage work, they are manual labourers and masons earning a meagre ₹300-500 per day. The women and children mostly work at scavenging and household chores.

It’s the children who are affected worst: by malnutrition, chronic diseases and high rates of infant mortality.

Abdul Kareem, in his late fifties, runs a small shop adjacent to the main office of the Community Camp. On the CAA he says: “This has happened to us before, what is now happening in India.”

“Nobody wants to leave their home but we have nowhere to go!” he says.

The Myanmar crisis and current political unrest in India share similarities. Myanmar witnessed mass racial killings and mass migration, whereas Muslim Indians still have an ambiguous future ahead. With the Scheduled Tribes and Scheduled Castes they are on average the poorest social group in contemporary India.

The Myanmar government implemented a citizenship law in 1982 with grades of citizens based on ethnicity, religion, language and nationality. The state perpetrated a genocide on Rohingyas beginning in 2012. In August 2017, medical charity Médecins Sans Frontières estimates, at least 6,700 Rohingya including at least 730 children under the age of five were killed in a single month.

ALSO READ:  Exploring The World Through Food Of Good Taste

The years-long genocide led to a mass exodus of Rohingyas into Bangladesh, and to a much lesser extent India.

Today India hosts about 40,000 of the “world’s most persecuted minority and the largest stateless population”.

They face a society whose senior government officials regularly make xenophobic remarks, such as Union Home Minister Amit Shah’s comments about “termites” and “illegal infiltrators” who should be “thrown out”.

Kareem’s small hut like home is at the centre of the asylum. Women, men and children flock in and about his shop all day long. “We are all traumatised, we don’t hold anyone responsible but our fate,” he says.

In the past four months the government has deported at least two Rohingya Muslim families back to Myanmar.

A discriminatory Citizenship Amendment Act that threatens to ostracise vast communities, and fuses with the National Population Register and National Register of Citizens to create a draconian course for proving your own citizenship through documents of ancestral identification, can be seen as a deliberate attempt to ‘otherise’ Muslim Indians.

Apartheid and a possible genocide seem evident from the large scale construction of detention centres across the country, with deaths in miserable conditions reported in a few. As Abdul Kareem rightly said, “There’s a possibility that Indian Muslims will be the next Rohingyas.” #KhabarLive

‘Gutsy Sailors’ Take On The Gusts In ‘Hussainsagar Lake’ In Hyderabad