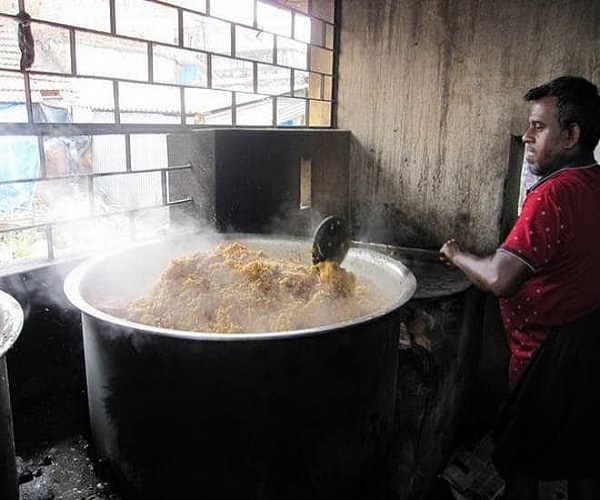 A humble eatery in a Kodimial village near Jagitial district in Telangana has made its name selling mutton biryani for several decades. For over 30 years, biryani heads have been seeking out a ‘shop with no name’ in the village, eager to taste its version of the sumptuous rice-and-meat dish that seems to have an ever-expanding constituency in world cuisine.

There’s just one hitch: the biryani is available only on Sundays, from noon to 3.30pm. So on any given Sunday, biryani lovers make a beeline to Kodinial from Jagitial, Korutla, Karimnagar and the local university campuses dotting the Karimnagar-Jagtial highway to queue up patiently for their orders.

“Just ask for ‘biryani kadai’,” says A Peer Mohamed, the second-generation proprietor of this family-run business. And sure enough, on a recent Sunday, when we land up in Kodimil, (15 kilometres from Kondagattu cross roads by car) we are readily guided by villagers to the signboard-less eatery.

Heritage recipe
We are just in time to see master cook Akbar Ali rinsing 50 kilos of the short-grained seeraga samba rice (named after its resemblance to cumin seeds) that will make the first batch of biryani for the day.

“On a normal Sunday, we usually make up to 70 kilos of biryani in three batches. It’s slightly reduced on auspicious days in the Hindu calendar when non-vegetarian food is avoided,” says Peer Mohamed, as he supervises a team of around 10 male staff in different tasks.

Even though Peer Mohamed is the managing director of three multi-cuisine restaurants in Karimnagar, Ramagundum and Jagitial(under the brand name Buhari), the Kodimial shop has its own fan following. “My father Abdul Rahman (also known as Ghani Bhai locally) started this business in 1977. In fact, old-timers here still call it ‘Ghani Biryani Kadai’,” says Peer Mohamed.

“My father started with tiffin items like dosa and idli, and then introduced mutton biryani in the evenings. By 1985, we changed the timing and made it a lunch menu item. We started getting a lot of word-of-mouth publicity, as people started showing up from nearby cities looking for our biryani.”

After his father and the bawarchi (master cook) passed away, Peer Mohamed took over the business in 1990. “I used to live across the road from the restaurant until 1995, so it was easy to manage business and cooking,” he says. “But after I shifted to Kodimial permanently, I decided to limit the biryani to Sundays in Kodimial. Even though we offer biryani cooked in the same style in our eateries, people still have an affection for our Kodimial product,” says Peer Mohamed, who used to double up as chef until 2000.

Old and new
Three large firewood-fuelled stoves handle the cooking of biryani, the Dalchar gravy and the boiling of chicken in a spice mixture in the rustic kitchen.

As the mutton gravy bubbles up in the heavy-duty aluminium deghsa, both Peer Mohamed and Ali take turns to stir the hot liquid with the help of long-handled slotted iron stirrers called kabeer karandi to check if the meat (approximately 70 kgs will be used for the entire day’s cooking) is done.

Ali and his team, who live in Kodimial, have been at work since 8am, chopping the onions and tomatoes, cleaning bunches of mint and coriander leaves and getting the ginger-garlic paste ready. Peer Mohamed personally measures out the rice, spices, preps the mutton and transports the entire lot from Tiruchi by 10.30am.

Around 7 to 8 bundles of firewood (of 25kg each) are required for the Sunday cookout.

There’s been a quiet revolution in deghsa technology too. “Deghsas are now flat-bottomed because it’s easier to stir the ingredients than in the older ones with a rounded base. But firewood helps to cook biryani on a more even heat than the gas stove, so we changed the vessels, but not the fuel,” says Peer Mohamed as we watch Akbar Ali douse the flames with well-aimed splashes of water from a mug.

Heat compress
“It’s time for the dum,” announces Peer Mohamed, referring to the age-old heat compress method that cooks food on a slow flame. With the residual heat of the embers keeping the deghsa warm, the cauldron is covered with a lid when the par-boiled gravy and rice have been mixed through. Ali scoops out the live firewood coals from the earthen stove with a tray and places them on the lid, effectively transferring the cooking action from the bottom to the top of the vessel.

“It’ll be ready in 20 minutes,” smiles Ali. “The fragrance will fill the kitchen.” Having joined as an apprentice to the earlier chef at the age of 10, Ali has been making biryani for 15 years, and had a sudden brush with fame when a video of him cooking in the Kodimial kitchen went viral on YouTube recently.

Cooked to perfection
In the adjoining hall, a couple has already staked out a table and several more customers are booking their places. Outside, the hitherto empty lane is filled with cars and two-wheelers, and a betel leaf seller sets up his wares on a table in anticipation of post-biryani sales.

As if on cue, the aromas from the kitchen get the crowd shuffling in.

Akbar Ali clears the coal from the lid, opens the deghsa, and surveys the result of his team’s efforts. His satisfied smile indicates that it’s all systems go from now.

Peer Mohamed, his sons and cousins fan out among the crowd, packing the takeaway orders and serving a la carte diners simultaneously. A side table fills up with accompaniments like deep-fried Mutton lollypops (meatballs), Chicken 65, fried fish and Pepper Chicken.

The mutton has been cooked to tender perfection, while the spiced, moist rice holds its shape without overpowering the taste-buds. “Some people say it’s the water of Kodimial that makes our biryani so tasty, while others think the secret is in the firewood stove. We’re just happy to keep cooking my father’s recipe for as long as we can,” says Peer Mohamed. #KhabarLive