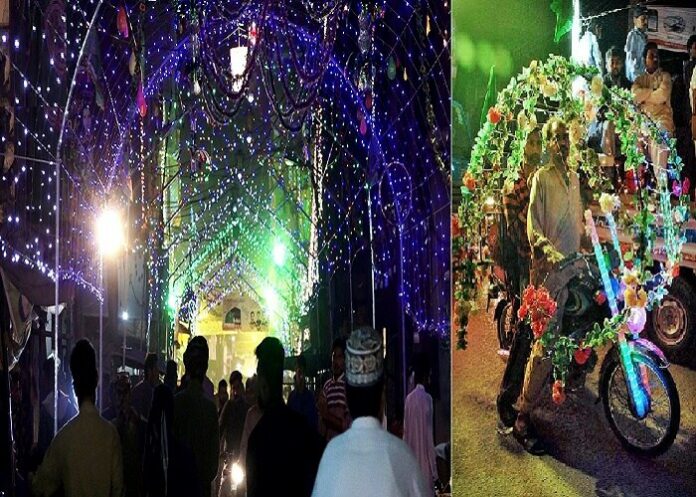 The literal translation of the term Eid e Milad Un Nabi means the birth day of the Holy Prophet. Muslims observe this day as the birth day of Prophet Mohammed. The typical celebration during this day consists of gatherings discussing the birth, life and message of the holy prophet, feeding the poor and guests, reading of the Holy Quran by the scholars, reciting the Naat or Nasheed poems or verses, organizing forums to discuss the true message of Islam, and contemplating on the religious and spiritual teachings of Islam.

The celebration of this festival started in the eighth century when Al-Khayzuran, (the mother of a caliph named Harun-al-Rashid) converted the house of Prophet Mohammed into a house of prayer. The Shias were the ones who initially started celebrating this festival. For some centuries, this festival was marked by huge processions, animal sacrifices, speeches by the rulers and offering gifts to those in power. Only in the 12th century, the Sunnis adopted this festival. However, this time, they went in for a different date.

Initially a large number of Sunnis were against celebrating this festival, but by 15th century, a large population of Muslim community adopted this festival. Since the beginning of 2oth century, this day was declared as the public holiday in most Muslim countries.

In different parts of the world, this festival is celebrated differently. In Pakistan for instance, the national flag is raised on the monuments of the nation and a gun salute is offered to it at dawn. In some parts of the world, huge carnivals and processions are organized. During such events, people distribute gifts among each other and also do guest and poor feeding. The mosques organize special prayers and a lot of decoration is made with lights for this event.

A number of elites and some sections of the Muslim community do not support the celebration of this festival. They say that neither the Prophet approved celebrating his birthday nor did his immediate followers celebrate this day. In fact, they too profusely quote from Quranic verses and say that Quran forbids celebrating the event.

However, a large number of Muslims have the notion that such interpretations of the Quran have no base and there is no mention in Quran whatsoever prohibiting the celebration of the birth day of Prophet Mohammed. Despite arguments in favour and against, the popularity of celebrating Eid e Milad Un Nabi has been ever on the rise to this day. #KhabarLive

Now, The Telugu States Will Compete On Development, Resolvation, Progress And...