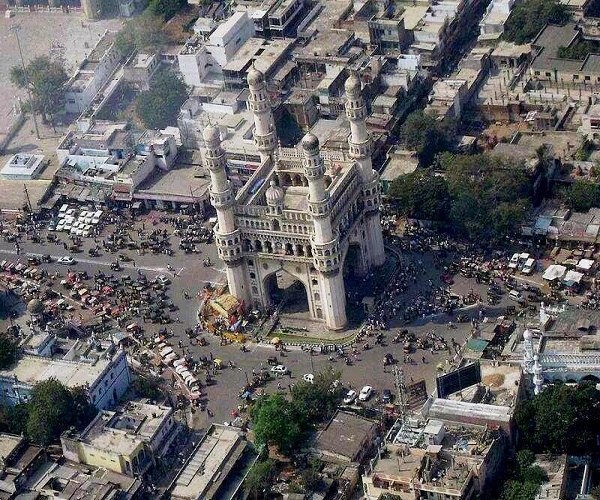 Cities have for long been known to have characters of their own. As with human beings, it is just a matter of being old enough. So strong is this belief that the character of the city overrides that of individuals. Stay long enough in a city different from your own and your character acquires shades that cannot be considered inborn.

So, if Mumbai is cosmopolitan and Delhi smacks of class structure, then Hyderabad is, as much as one hates using the word anymore, laidback. But it is interesting that the twin cities of Hyderabad and Secunderabad present such a contrast that people brought up on one side of the Musi very rarely feel at home on the other side.

Myths cloud the minds of people on each side concerning the other. Although the majority community to a great extent determines the overall ambience of the city, any one who knows the first thing about the Old City will tell you that the dairy outlets where you can just drop in for a glass of steaming milk (not the pre-packaged kind) are as much an exclusivity of the Old City as the Unani stores.

Well, it can be said that religious occasions acquire a lot more colourful and louder edge in the Old City but, believe me, participation cuts across religious lines. Furthermore, it’s not as simple as that. This part of the city stands for the old, but not so much the conservative order, for conservatism is but the hallmark of this nation. So, without attempting to reinforce or demolish these myths, we are only going to try to outline the character of this part of the city which fascinates and even evokes unease in some.

There is much to distinguish the way of life and the work culture of the people here. Punctuated by landmarks and relics of a bygone era, this part of the city derives its flavour from the fact that the rulers of the erstwhile state of Hyderabad, the Nizams, ruled from here. If a school was the residence of the Nizam, then a dargah holds his jewels (not the ones in the limelight). So there is no dearth of glory for the people here.

The sub-conscious, or even the conscious mind, of the people here is still coloured by the Nizamian attitude, what with the Charminar towering over their heads. For all the notoriety of a particular Nizam’s miserliness, Nizamian attitude stands for excesses, lethargy and procrastination. The man (or the woman and the child, for that matter) here lives at a pace tuned to one’s own whims and fancies. It wasn’t so long ago when for most of the young people here, the day wouldn’t stand before 11 am.

It does appear to have changed for this next generation. Guys whiling away all days in cafes and over cups of tea was pretty much the norm. There was this person who would land in a café at 9.30 in the morning; only to take a lunch break at 1.30 p.m. and then to resume his vigil at 3.30 p.m. through to late in the evening. There is, though, a strong sense of community that is yet to be completely destroyed by modern living.

People still have time for each other here, much more than some of us would like. There isn’t yet that indifference that is sometimes crucial to getting on with one’s own business. Then the various religious occasions and duties often interrupt a day’s work. There is no one way of looking at this way of life. It is all a question of priorities.

Leaving aside this question of the ‘way of life’, we will go on to some of the more definite peculiarities of the people. Apart from the biryani that is so famous, Hyderabad specializes in a kind of soup known as nahari in the vernacular. Made of the paws of the lamb, it is, along with naan (bread), the breakfast and supper of many a man. In fact, the city wakes up at 3 am with the men in the naan shops. Quite a few of these shops line the road at Purani Haveli and you can watch them work while taking a stroll down the path.

The most famous one of course is the ‘Munshi Naan’ which is over a hundred years old, and has only recently moved out of its first dwelling to a more polished one down the road. Then, of course, there are the numerous pearl shops that line the approach to Charminar. Another product that is quite popular here is the itr, a non-alcoholic perfume used mostly by Muslims, but its long-lasting fragrance recommends it to most people.

The Laad Bazaar is justly famous for its shimmering bangles, but a walk down that road will take you to Chowk, an area famous as a pets’ market. It is now highly diminished, though, and the owners here are so wary of letting one photograph their products that they might think us to be spies of Maneka Gandhi.

There are quite a lot of antique shops too, but what they sell is not quite so exquisite as old. Brass products occupy most of the space here. Then there is the notorious landmark, Shehran café. If you are anywhere close to it, you are besieged by touts who are after your riyaals, dollars and pounds, if you have any. They offer a price, though. You can also get good deals on ‘imported’ stuff here.

The one occasion that is not likely to make its impact felt in Secunderabad is Moharrum. This period of mourning is observed to the hilt in the Old City and the Shia members of the community are conspicuous by their black dresses and their mourning by the umpteen loud speakers. The various processions, from one dargah to another, night-long congregations are quite frequent in the two-month period and it adds to the experience.

It is all a little too much to get used to for the uninitiated, but the experience is certainly an intriguing one. So, as you see, there is more to this city than a stray incidence of violence and the Gulf craze. It should take something extraordinary for me not to feel the change in the air, once I cross Mozamjahi market into either part.

P.S: For music lovers, this is the place to shop. Those 10-15% discounts that the big music outlets fuss about are on here all year long. Music is sold here strictly at the wholesale cost and there is nothing shady about it. Thought that might induce you to take a walk in to this part of the city!

‘Nothing Changed Since 2001, Telangana Junior Colleges Remained As Concentration Camps’,...