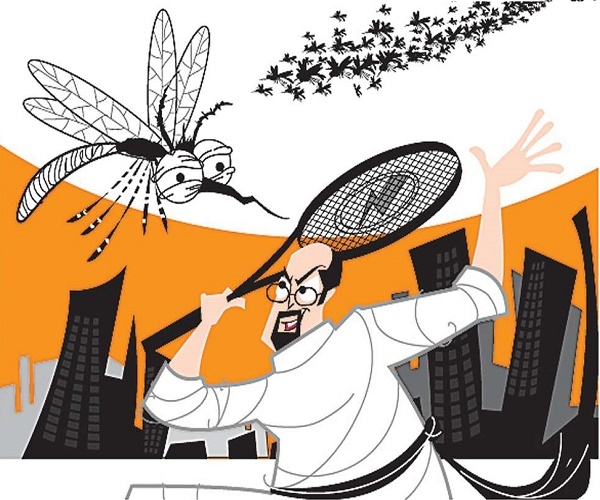 It’s ancient, pesky, and persistent. Its hum can spell impending doom. But the ubiquitous mosquito also drills a hole in your pocket triggering demand for hospitals, clinics, diagnostic kits, even some FMCG products.

Last October, Godrej Consumer Products launched the Good Knight Bramasthra (say Good Knight in the morning) campaign to make consumers aware of the mosquitoes that bite during the day and spread Dengue, Chikunguniya and Zika.

But, repellents are only a fraction of the economy surrounding mosquitoes pegged at Rs 25,000 crore, and counting, given that mosquitoes globally top the chart of the deadliest animals with 725,000 kills a year, according to a World Health Organization estimate. In fact, the number of deaths could be manifold given the large number of unreported deaths in both the tropics and the subtropics.

And, the fortunes of a host of companies are linked to India’s mosquito woes. In fact, few could miss the image boost that pharma major Sun Pharma could get with its corporate social responsibility initiative, when on April 25, it announced a partnership with the government on a malaria eradication project.

“The campaign was to create consumer awareness and bring about a change in consumer habits,” says Sunil Kataria, Business Head, India and SAARC, Godrej Consumer Products, adding it intends to spend Rs 25 lakh to Rs 30 lakh on the campaign in the first year. Changes in consumer habit also translated into bigger sales. According to a Euromonitor study, home insecticides in India grew by 10 per cent in current retail value terms in 2015 due to the spread of diseases such as dengue, swine flu and chikungunya. “Promotions from leading brands evolved around the same theme, which was to safeguard against such diseases, and this influenced consumers to buy home insecticides,” it said.

Says Sachin B. Bobade, Research Analyst, HDFC Securities: “The household insecticide (primarily mosquito repellents) market in India is growing at 15 per cent per annum and will grow at 15-17 per cent in 2016/17. Increased awareness about mosquito-borne viruses could lead to more spending on mosquito repellents.” To boost this further, companies are trying out innovative offerings aimed at ease of use and affordability like the Godrej fast card priced at one rupee.

“It (fast card) has become very successful and is one of our fastest growing products, crossing Rs 100 crore turnover in less than a year,” says Kataria, adding that 40 per cent of rural households were using it, compared to the 27 per cent market penetration for most of its other products.

Kataria says Godrej is leading the market with almost half of the company’s domestic sales coming from household insecticides business. “One of the very big emerging needs is effective and affordable out-of-home products,” he adds. While Godrej dominates the market with a wide product portfolio – Good Knight, Hit – Dabur is the market leader in the personal application mosquito repellent category under the Odomos brand with annual sales of around Rs 50 crore and growing at 8-10 per cent per annum.

Besides, other leading players such as Reckitt Benckiser, Jyothy Laboratories and Karamchand are also witnessing steady growth. For example, Jyothy Laboratories’ household insecticides segment contributed 15 per cent to its total sales of Rs 1,505.29 crore, or Rs 235.18 crore, in 2014/15 with this segment posting the highest growth of 18.2 per cent over the previous year and higher than any of its other product segments like fabric care, dishwash or personal care.

The home insecticides market, however, is just a prick considering the estimated size of the total mosquito containment, management and treatment industry, estimated at a whopping Rs 25,000-crore, at last count. And new elements are getting added to this ever-burgeoning economy surrounding mosquitoes like for instance, after the potential threat of Zika virus made to the long list of India’s vector-borne woes recently, the February 3 announcement by Bharat Biotech, a company focussing on vaccines and bio-therapeutics, of “breakthrough in developing two Zika vaccine candidates.”

In fact, the number of cases for Dengue alone makes costs incurred on its detection and containment seem huge. According to a study, Economic Disease Burden of Dengue Illness in India, by INCLEN Study Group, led by Professor Donald S. Shepard of Brandeis University, Massachusetts, along with experts from India, the annual average of clinically diagnosed dengue cases between 2006 and 2012 was 5,778,406, or 282 times the officially reported number of 20,474 Dengue cases per year. “The economic and disease burdens of dengue in India are hundreds of times greater than estimates based entirely on official reporting.

The majority of costs are incurred in the private sector and are paid mostly by households,” it further states. Explaining the large numbers, Narendra K. Arora, Executive Director, INCLEN Trust International and the former professor of paediatrics at the All India Institiute of Medical Sciences (AIIMS), and a co-author of the study, says: “It is because the government data is incomplete and leaves out a large private sector that treats dengue cases in the country.

Plus, there are a large number of viral fevers that are due to dengue but are mild and do not need hospitalisation. Our study includes all of these to calculate the cost of treatment.” Also, even in some government settings where treatments are free or subsidised, there are eventually expenses being incurred and this study captures that too.

“The overall cost of Dengue illness in India was $1.51 billion (approximately Rs 10,000 crore) in 2013, of which $1.07 billion (Rs 7,000 crore) was the cost of cases treated in hospitals, $0.29 billion (Rs 1,900 crore) in ambulatory settings (outdoor patients), and $0.10 billion in non-medical settings. This combines the direct cost (medical treatment, diagnostics, drugs, etc.) as well as indirect costs (the value of lost productivity due to illness and premature death),” says Professor Donald S Shepard from the Brandeis University, Massachu-setts, who led the study, in an email to Business Today.

That’s not all. The impact of dealing with Malaria and Japanese Encephalitis only adds to the costs. Says Manish Kakkar, Senior Public Health Specialist at Public Health Foundation of India (PHFI): “Unlike Dengue, which tends to be more urban-centric, if you look at other vector-borne diseases in India, particularly Malaria, which is much more widespread in rural India and forest locations, the burden of diseases would be higher if not the same as for Dengue. In fact, various studies on Malaria in India put the number of deaths at 60,000 and 200,000 per year.”

The diagnostics market, too, is witnessing never-before-seen growth with the number of rising cases. Says Jatin Mahajan, Managing Director, J. Mitra, a leading supplier of diagnostic kits, including for malaria, chikungunya and dengue among others: “Today, we are an over Rs 200-crore company, manufacturing a range of products, including over 10 lakh kits for testing mosquito-borne viruses.

These kits make 20-25 per cent of our total revenue compared to 6-7 per cent in the pre-2009 period.” He says the market for diagnostic kits in India is growing at 15-20 per cent per annum, compared to 10-12 per cent in 2009 (till 2009 malaria was the key mosquito-borne ailment) . “The demand for kits is directly proportional to the level of awareness,” he says. The company is also working on diagnostic kits for Zika.

But then, the diagnostic kits space has many players and imported kits are also being sold. Referring to this, Soumya Swaminathan, Director General, Indian Council of Medical Research (ICMR), says: “because people tend to get panicky and rush for diagnosis, all sorts of diagnostic kits are being marketed.

In fact for dengue diagnostics, the government had to put out a statement that most of the rapid diagnostics tests in the market are of very poor sensitivity and specificity, and should not be used.” Instead of these rapid tests, doctors now opt for a more time-consuming, but much more reliable method of Elisa technique, which it costs Rs 800 per test. According to estimates, the diagnostics kit industry is valued at around Rs 100 crore.

However, vector-borne diseases are not a profitable business for hospitals, especially for tertiary hospitals, because it remains an opportunity cost as more beds used for dengue patients would mean less beds for more revenue-yielding ailments and procedures such as cardiac surgeries. Says Rana Mehta, Partner and Leader, Healthcare, Pricewaterhouse-Coopers: “Most vector-borne diseases put additional stress on the already stretched healthcare system both in the public and private sector.

The non-availability of beds due to dengue epidemics adversely impacts patients requiring urgent surgeries and care.” But then, when an outbreak strikes, big numbers take over like in Delhi last winter when hospitals were finding it hard to cope with dengue and the state government had to set up fever clinics.

There is, indeed, good reason for Bill Gates to say: “There is no animal on earth that transmits more diseases than mosquitoes.” And clearly, promoting social awareness to contain the spread of viruses has never been so profitable. #KhabarLive

End of An Era, Beginning Of Another To RCom?