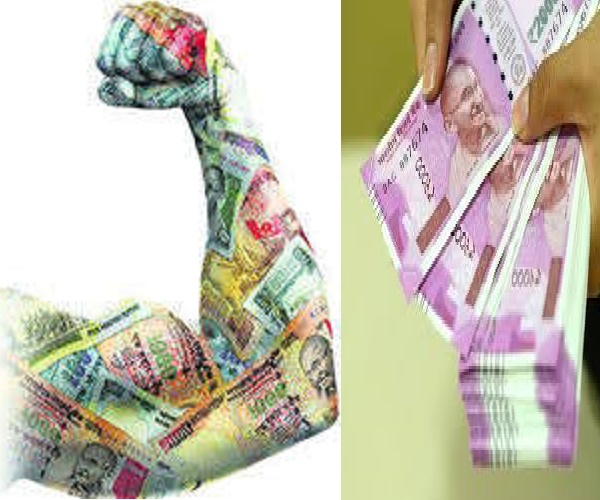 Money, money, money…a five letter word, a common word and most importantly a popular word. It is a word, which is regarded as the major driving force behind the growing materialist or consumerist culture in the world. A simple and innocent looking paper wad, which is basically harmless in look, but strangely possesses the power of captivating even the diehard hands-off-money attitude individual. It has the devil in it to turn the sanest person into an insane one, altering the composed mental equipoise. Even a modern day Ramakrishna Paramahamsa would get swapped by and become a victim to its charm and get sucked into its web. The western society has always been a money oriented one, where one’s aim is to acquire money in large quantities and use it to enjoy all the comforts and pleasures of life. A person is known and respected by the amount of wealth he or she posses, the more he or she has then the more that person is respected. Money culture is particularly prevalent in the USA.

Indian society and those of other Asian nations are societies, which respect the value of money, but does not confer over glorified status to it. But unfortunately the trend seems to be reversing with the sweep of the whole world by the forces of globalization. Every country’s economy is getting intertwined with the global economy, which is driven by market economy, an economy that is based on and driven by money.

It can be easily made out that over the last few years Hyderabad has been swamped by money culture. Money has become the in-thing, norm, byword and mantra in the city. One finds the fruition of the same in the shape of more shopping malls, more restaurants, more entertainment zones, more hotels, more hospitals and diagnostic centres and so on. One can only shake one’s head in wonder and then get entrapped in the swirling churn-out of the same. There seems to be a sort of cash flow in abundance, the more the flow, the more the skyline of the city appears to be changing. What are basically the factors that have led to the present situation? There are a whole lot of factors that have contributed to the ongoing theme:

NRIs returning back to the city from USA, Gulf and so on
The terrific growth of Tollywood (Telugu film industry) in the city bringing along with them creation of more jobs and more so better pay packets. Along with this has come the phenomenal spurt in growth of event management firms.
Establishment of many MNC city offices which in turn has led to creation of better paid and more jobs.
Easy availability of loan facility from banks and finance related firms.
Additional spurt in growth of quality and value based educational institutes as ISB, IIIT, Hotel and Catering Institutes and so on. The same has brought with it staff who are well paid.
Spurt in growth of tourism and entertainment related zones, which in turn has led to well-paid staff members.

Added to this, one also finds the neo-modernstyle-savvy youngsters all flushed with lots of wads. The same coming vide their working in the culture of part time jobs allied with their studies ambitions. Thanks to availability of jobs in IT-related service sectors, retail outlets, call centres, travel firms, event management firms and so on, they seem to generate and rake in a fair amount of easy and quick money. Though at the same time it must be mentioned that they put in a lot of hard effort and enthusiasm in their work. In most of the case, the said earnings is tossed away in exchange for any item which catches their eye as clothes, movies, books, all-that-jazz vehicles and so on.

The city has also seen a phenomenal growth in grant of loans aided by low rates of interest. Loans as home loans, car loans, business expansion loans, educational loans and so on have become a common in-thing and the same have been gobbled up by customers of various hues. Known banks as ICICI, HDFC, HSBC, Citibank, GE Countrywide and so on have been in the vanguard to provide the same. The ease with which loans are being disbursed has been attributed to sound financial health and liquidity position of the said banks. With slick and innovative marketing techniques the banks have been engaged in generating a kind of easy money flow. No wonder one finds stunning gloss enveloping the swarm up of the city, the same coming through in the form of slick neo-modern style homes, malls, multiplexes, vehicles, restaurants and so on. The said added attractions have changed the very skyline of the city. Though the same is indeed welcome, one has seen the darker side in the form of collapse of numerous urban co-operative and Non-banking financial institutions. The recent stunning collapse of so-called reputed names as Prudential Urban, Vasavi, Leafin India and so on can be put across to only one factor and that is heavy dispersal of loan facility. All of these finance related firms had attracted funds from the general public through added charm of unbelievable high rates of interest.

The ease with which money is flowing around led to establishment of the nation’s first hypermarket, Giant Hypermarket, whose head honcho has put the same across to the high purchasing capacity of the city’s people. Some of other big names in shopping malls as Shopper’s Shop, Lifestyle and so on have chosen Hyderabad as their next choice after Mumbai to set up their ventures. And then the spectacle of known jewellery showrooms as Tribhovandas Bhimji Zaveri, Kalidas Kirtilal and so on doing the same, choosing the city after big metros as Mumbai, Chennai and so on goes along the same line of high purchasing power of people. The city will have soon the nation’s first IMAX Zone courtesy LV Prasad group further speaks for the ease with which money flow is changing the city’s skyline.

Money flow has its darker side as already menioned. The innocent looking paper wad is certainly all-powerful, possessing the necessary firepower and ammunition to destroy the moral fabric of society, drive a deep chasm in a family structure or make or break marriages or a close and deep friendship and so on. It also causes creation of bad psychological effects as seeds of revenge or easy come easy go money habit among teens and elders alike. It also has led to a spurt in medical problems of all kinds, primarily stress and mental anxiety of annoying depth. Psychologists have put this factor to the said person never realizing the full depth of satisfaction. The depth never comes about as craving for more and more money persists. They further are unanimous in their view that this factor can be overcome if the person is satisfied with what he or she generates.

Psychologists also pinpoint that the current trend may also lead to possible long-term attitudinal complex and create a sort of general imbalance in the society. If so, the same could happen to the city and the state as well. A sort of debase anarchy comes about, a classic example being that of Japan, where the same led to a decline in moral standards and an attitude of slackness from traditional more of hard work and respect for its real value. The other disturbing factor that could result from the money-culture sweep is that the foundation of the walls of human values comes apart and turns a human into a money making machine. Money culture sweeps also leads to a lot of pride factor, the status power receiving a fillip. Agreed, money is a vital factor, necessary to enjoy the basic necessities of life, tastes and enjoyments, but to possess more than what he or she possesses is something the person should avoid. If the person doesn’t, then he becomes a debased soul, a soul who has no other goal in life but to earn more and more money.

In addition to this, how it is earned is something, which should be noted down, if done in a legal manner it is good but where it is done illegally in the form of stealing, taking bribes and so on, then it is really unfortunate. When we talk about this point, mention must be made of the various scams sweeping the city, the example of collapse of co-operative and NBFCs is a good one. The same resulting from the sheer and brazen swallow-up of depositor’s money, a saddening fact this.

Finally, a cool think, get the facts right and agree that strange indeed is the ways of this innocent looking paper wad, it creates a kind of a deeply suspicious relationship, one which results in disputes and then leads to bad blood and sour relationships.

Let us hand over the prize to a noted psychologist Dr Sudhakar Krishnamurthy who said, Money rears its ugly head as a problem only if there is primary incompatibility in the relationship. Money should never become the bone of contention between humans, even where it does the communication lines should be kept opened and disagreements honestly spoken about without fear”.

It is truly a gem of an advice. And if followed up then the money culture sweep may not turn out to be bad as it is presumed to be, it can be good and that is what matters and the city deserves to soak in that sweep call. For sure, some of the folks would love to hear the sharp rankle of the saying “Paise banana ho to, Chalo Hyderabad.” “wah kya baat bhola, sach much wah!” Looks like a deep yearn for the tag of ‘Land of money and opportunities’ tugs the heart of Hyderabad is. #KhabarLive