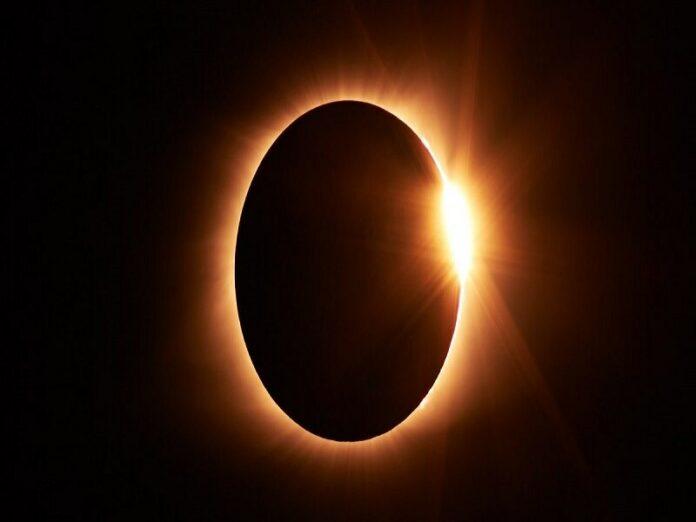 Today’s solar eclipse is the last one this year and also very special. During the eclipse, the Sun appeared as a ‘ring of fire’ for a brief moment in entire Telangana but makes lovable feature to many in Hyderabad.

The spectacle wasvvisible in parts of South India. Those living along Mangaluru or Madikeri in Karnataka; Telicherry, Calicut, Palghat in Kerala; and Ooty, Coimbatore, Pollachi, Tiruppur, Palani, Dindigal, Karur, Erode, Trichy, Pudukkottai, Karaikudi, Ammapattinam, Muttupettai in Tamil Nadu are in for a celestial treat. People in the rest of India need not despair: a partial eclipse will be visible everywhere else.

The eclipse commenced at 8:00 am. The disc of the Moon creeped over the Sun from its western edge. The maximum eclipse will be at around 9:30 am and the episode will conclude at around 11:16 am. During the eclipse, the Sun appeared as a crescent of various sizes. For those along the line of annularity, the Sun appeared like a dazzling ring in the sky at 9:30 am or so.

Shadow play
The Sun is about 400-times bigger than the Moon as well as 400-times farther away from Earth. These details together make both objects appear to be about the same angular size in the sky. At times, the Moon comes in between Earth and the Sun and partly obstructs the view of the Sun, causing a partial solar eclipse.

At some other times, all three celestial objects – Sun, Moon and Earth – may be so perfectly aligned that the Moon will obstruct the full face of the Sun for a brief moment. This is called a total solar eclipse. (In the same way, when the Moon enters the shadow cast by Earth, a lunar eclipse happens.)

Earth’s orbit around the Sun and the Moon’s around Earth are both elliptical. When Earth moves in an elliptical path, it will be closest to the Sun around January 5 and farthest from the Sun around July 4. The Moon also passes through two similar extreme points about once a month, and takes 27.55 days to return to the same point again. If a total solar eclipse occurs when the Sun is relatively closer and the Moon farther, the Sun’s apparent size will be bigger than the Moon’s, which means the Moon won’t be able to cover the full face of the star.

Why can’t we see it everywhere?
In the image below, the point marked ‘A’ is right along the straight line connecting the Moon and the Sun. Therefore, the Moon will obstruct the central portion of the Sun at this point, and one will be able to see an annular solar eclipse. At the point marked ‘B’, the Moon’s direction is slightly away from that of the Sun’s centre, so only a partial solar eclipse will be visible.

However, at the point marked ‘C’, the Moon does not come in the way of the Sun at all, so there will be no eclipse at this point. As Earth revolves around its axis, the points A, B and C will trace a path on the planet’s surface, defining the three eclipse paths.

How to watch an eclipse?
Any bright object is a threat to our eyes. Staring at bright light could cause anything from temporary discomfort to permanent retinal damage. So you shouldn’t look at a flash of lightning or a welding arc without protecting your eyes first.

On any day, eclipse or not, do not stare at the Sun. There are two ways to observe the Sun safely. You could use a solar filter (not goggles) made specifically for watching eclipses – or you could project the image of the Sun using a telescope or a pinhole camera (but you should not look at the Sun directly through a telescope or a pinhole camera). X-ray films and smoked glass are not safe enough.

ALSO READ:  “How Was India?” This Video Gives The Most Beautiful Answer Possible To This Overwhelming Question

The eclipse is an apparent phenomenon. That is, it’s a matter of appearances. Just like an umbrella or a tree obstruct sunlight and provide shade, the Moon obstructs the Sun’s emissions and casts a large shadow on Earth, causing an eclipse. Therefore, eclipses are not events that occur on the Sun and they don’t affect the star at all. So the Sun does not emit any mysterious emissions – nor is it human to fear shadows.

The mythology of Rahu and Ketu is deeply ingrained in India’s cultural psyche. However, ancient Indian astronomers like Aryabhata and Lallacharya have stoutly rejected them. In fact, as far as Indian astronomy is concerned, Aryabhata was the first to present a cogent naturalistic and scientific explanation for eclipses.

In his work Aryabhatiyam, written about 1,500 years ago, Aryabhata argued that the Moon’s shadow falling on a location results in a solar eclipse. Lallacharya’s work Sishyadhivruddhida tantra, a handbook for students of astronomy written 1,300 years ago, unambiguously rejects the Rahu-Ketu story as a myth. India’s scientific heritage is rooted in such rational and logical texts, and not in scriptural fables.

Similarly, unlike the fake claims being circulated on the social media, various studies have shown that cooked food does not get spoiled, nor is stepping outside the home and watching an eclipse. It is a natural celestial show. Please enjoy it safely and with friends and family. #KhabarLive