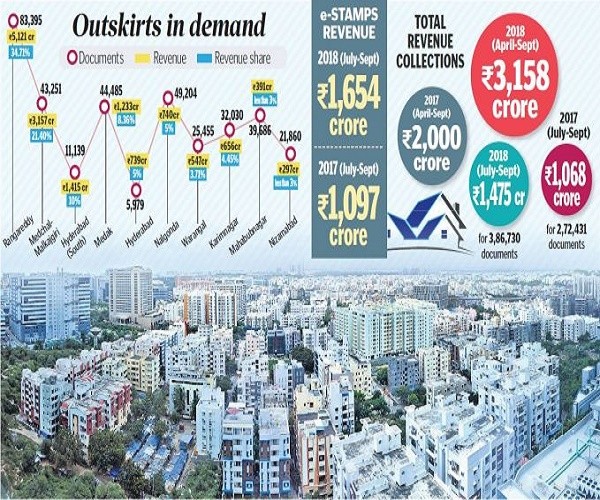 There was a time when the core regions of Hyderabad and Secunderabad used to be the driving force of the real estate sector in the State. While there is no doubt that the IT powerhouse continues to attract investors, the fact also remains that in the last few years, the city outskirts and nearby districts have leapfrogged the core areas of Hyderabad and are fuelling the growth of the sector.

Instead of settling for apartment units in core areas, working families appear to prefer the city outskirts and neighbouring districts. While they prefer travelling to the core regions of the capital for work, a majority seem to have chosen the peripheries to invest in their dream homes.

The percentage of revenue generated by the Registrations and Stamps department of the State government from the outskirts and neighbouring districts outstrips the revenue generated from within core areas of Hyderabad. In fact, the three districts including Rangareddy, Medchal-Malkajgiri and Medak are generating a lion’s share of the real estate sector revenue and account for 64.5% of the entire revenue generated through registrations of property documents between this July and September.

“The State government has invested a lot on infrastructure in districts surrounding Hyderabad and this is where the development in real estate is happening. The massive infrastructure growth, investment in IT by MNCs, affordability and introduction of RERA has created a positive buzz and families are opting for the outskirts to investment in their dream home,” says Deputy IG, Registrations and Stamps, Vemula Srinivasulu.

Between this July and September, Rangareddy district generated Rs 5,121 crore revenue through registrations of property documents, which is 34.71% of the entire revenue generated in the State. The number of documents received by the Registrations and Stamps department during the same time from the district was 83,395.

The real estate sector in Hyderabad has continued its upward march by registering a sustained momentum of growth in the past six months. The revenue collections of Registrations and Stamps department between April and September of this year are touching record levels.

This year, between April and September the Registrations and Stamps department received revenue of Rs 3,158 crore. Last year, the department collections during a similar time span was just Rs 2,000 crore.

Apart from registrations, the department also generated revenue through e-stamps, which are needed for registrations. According to the latest figures available, in the present quarter i.e. between July and September the department has made revenue collections of Rs 1,654 crore while last year during the same time, the revenue collections through e-stamps was Rs 1,097 crore. #KhabarLive

Another ‘Lockdown’ Imposed From July 4 For 15-Days In Hyderabad GHMC...