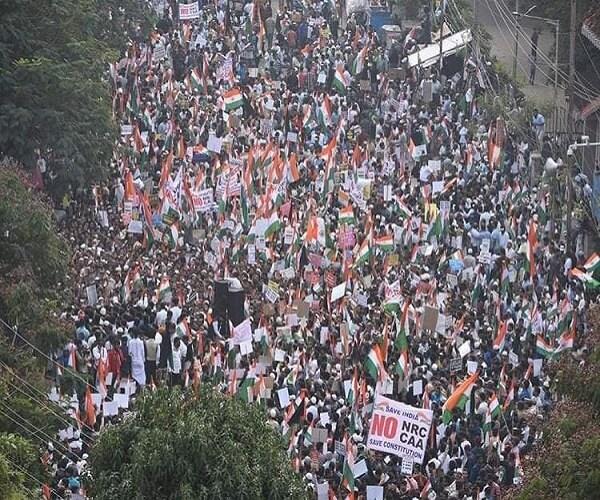 Political history of independent India amply illustrates how street agitations have been used as a potent instrument by the opposition to create an anti-incumbency environ against an otherwise well entrenched regime.

Economic issues and failures of policy implementation have been the common cause for the politically disparate groups to come together for vote mobilisation.Students and workers were always the focal points of an agitational campaign — the most pronounced in recent history was the episode of JP agitation that derived strength from the parallel Railways strike masterminded by George Fernandes in 1974 to oppose Indira Gandhi.

The war cry of that agitation revolved round misgovernance and corruption. However, that particular all India stir — as far as one can see — never displayed a communal streak.

The current protests in the country on the twin issues of Citizenship Amendment Act (CAA) and National Register of Citizens (NRC) need to be analysed and evaluated considering that for the first time the opposition at the all-India level is stoking communal passions to whip up a public agitation on what it alleges are the ‘anti- Muslim’ measures of the Modi government.

It began unsurprisingly with the protests by Jamia Millia University students of Delhi. CAA by itself did not touch the Muslims of India living as equal citizens of a sovereign nation but the idea of India declaring itself as the welcome home of minorities of Indian origin persecuted in the Islamic states in the neighbourhood, was apparently taken by the protesters as the indicator of a communal discrimination that might get into the implementation of the NRC project.

The debate got linked to the age-long problem of illegal Bangladeshi immigrants that abound not only in the North-East and West Bengal but to an extent live in the rest of the country as well.

Now broadly speaking, CAA could add to the BJP vote bank while NRC had the potential of adversely hitting the Congress and other opposition parties who distinctly banked heavily on the Minority support.

Prime Minister intervened early to retrieve the CAA from the controversy created by the public mention of NRC, by announcing that the latter was still an idea that had not been discussed yet at any level in the government. However, the opposition is in no mood to let go of a political weapon that could keep a national level agitation alive against the ruling party, particularly since the NRC link of CAA continued to find mention in the public narrative on citizenship.

The opposition has tried to enlarge the agitation by expanding on one hand, the Jamia Millia protests into an anti-government stir of the students propelled by the disturbances in JNU and building on the other, a campaign to the effect that the Modi regime was being pro-Hindu and anti-Muslim in violation of the secular norms.

The opposition was hoping to consolidate the Minority and liberals behind it. There is an obvious political risk the opposition runs here of acquiring an anti-Hindu and pro-Muslim image.

The agitation is progressively becoming focussed on the opposition to the CAA on the single point that it did not enjoy Constitutional validity as it granted citizenship on the basis of religion but the Hindu majority of this country would be left wondering why the opposition was agitating when the Act did not take away anybody’s citizenship.

There is an ongoing counter campaign of the BJP government in defence of CAA and this could generate a Hindu backlash against those who projected the legislation as an anti-Muslim move.

The opposition could be going against the Hindu sentiment that considered India as the home of Hindus. Beyond a point, the average Indian rooted in the soil does not understand the political ‘liberal’ thought that regarded ‘nationalism’ as an unhealthy idea in a Hindu majority India.

What should cause concern, is that the anti-CAA agitation is rooted in a communal divide and is prone to acquiring shades of militancy that can effect internal security if not moderated in time.

Just as abrogation of Article 370 by Parliament on August 5 was opposed on the implicit ground that it was a ‘Muslim issue’ — which was certainly not the case considering that the integral state of J&K was a multi-religious entity under our secular Constitution — the CAA on its own was being denounced as an anti-Muslim measure even though it did not touch Muslims at all.

In both cases, the opposition is unwittingly putting Indian Muslims and Pakistan on the same side of the political fence. Some opposition leaders are deliberately bringing in Pakistan in what is a matter of internal debate in India.

As and when the NRC is announced, Indians as a collective will certainly favour a humane process of identification of migrants and some consideration for families that had children born here and did not invite any suspicion from security angle.

The launch of National Population Register (NPR) in the meanwhile — this is a form of census — is no doubt adding fuel to the fire and it should not therefore go beyond counting people as and where they are.

Large number of poor Indians have no permanent address or even an authorised identification and NPR should not start looking like the NRC in another form. The fear and mistrust on this count can easily engulf vast sections of population and give the opposition a cause for converting anti-CAA agitation into a movement of the poor and the weak.

A festering public unrest created by the anti-CAA agitation is being sustained by the centre-state conflict raked up by opposition-ruled governments.

Even without bringing up questions of performance of Modi government in economic and other people-related spheres on the table, the stir is managing to create an impasse and a feeling of stagnation around and thus drawing attention to the issue of ‘governance’ as such.

While the world opinion on Kashmir is showing an understanding of India’s position on the lockdown there, the Hindu-Muslim divide in the country on the issue of CAA is finding an echo outside of India.

Our diplomacy must have a considered common ‘brief’ on the issue for explaining India’s stand on the persecuted minorities in Islamic regimes.

The democratic world will be willing to grasp India’s sensitive approach to non-Muslims of Indian origin who were suffering because of the rise of radical Islam in the Muslim world — with Pakistan becoming the epicentre of its growth. This has to be done in a knowledgeable way and in a manner that brings out India as a non-communal country that was only protecting all its citizens against Islamic fundamentalists.

The Centre should not allow the citizenship debate to cloud its work on the development front. Prime Minister Modi’s image of personal integrity and devotion to national advancement holds and this should help it to reactivate the narrative of ‘development for all’ amidst the distractions caused by the current agitation. #KhabarLive

How ‘Education Mafia’ Dominates Fees, Books, Degree And Naukri In Our...

‘You Are Not An Indian National’ – The ‘Scariest Notice’ Slapped...