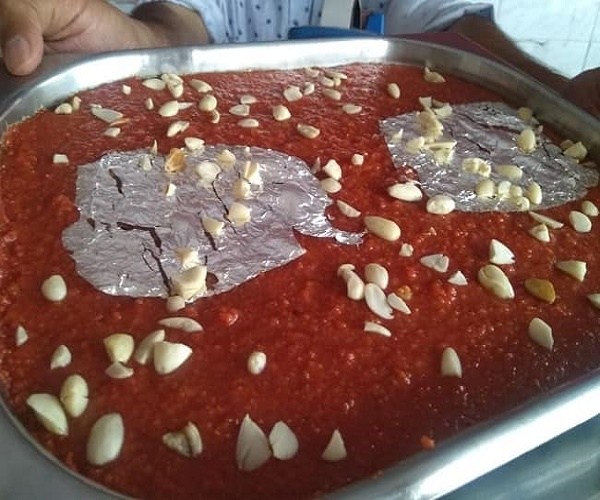 In Hyderabad has stories to tell from each nook and corner- and many of these are appetizing tales, stories that make you feel hungry instantly. Food here oozes of history, tradition and loads of fat! Every shop is at least half- a-century old and may have signboards that are fading out but the culinary delight on offer is unmatched.

As much as Hyderabad is synonymous with the Hyderabadi dum biryani, it is also famous for its traditional desserts – from apricot sweets to cucumber mithais, Hyderabad has a lot to please the sweet tooth. And if you are in Hyderabad, wanting more than just the biryani, Jouzi Halwa, a Turkish sweet at the Hameedi Confectioners, is just what you need.

Situated opposite the famous Mozam Jahi market, the shop is difficult to miss. Hameedi neither has plush interiors nor the dazzling neon signboards that welcome visitors from far. But, the traffic bottleneck right in front of the shop and the aroma wafting from Hameedi is enough for people to turn their heads and grab a plate of the Jouzi Halwa before the signal turns green!

Jouzi Halwa is a rich sweet dish, and though a serving may not look too big, devouring the whole of it is a feat. Bright red in colour and topped with cashew nuts and silver foil, Jouzi tastes like a richer variant of paalkova but sweeter and a lot heavier.

As rich as the Jouzi Halwa is, the richer is its history, says Mohammed Anees, the present owner of Hameedi Confectioners. The shop is over a 100 years old and was set up by an 11-year-old Turkish boy who later went to become the favourite halwai of the last Nizam of Hyderabad, Mir Osman Ali Khan.

“I have lost count of how many years the shop has being in existence now. It was found by my grandfather, Mohammad Hussain, when we was still a young boy. He was of Turkish descent and his father was a soldier in the Nizam’s army and he passed away when grandfather was just two years old. Since he was in the army, the family used to receive pension from the state and grandfather was the only child who had to fend for his mother,” Anees narrates.

With the money that came from his father’s pension, Hussain set up a small sweet shop in front of the Mozam Jahi market along with his friend, who was much older in age and a cook by profession. “Though he was only 11 years of age, he had the physical built of a much older person and all the more, was passionate about food,” Hussain says.

And thus Jouzi Halwa travelled all the way from Turkey to Hyderabad through Hussain who introduced the dish to the city.

But the history doesn’t end there. For a long time, Hussain’s shop had no name but business was ripe due to the absolutely tasty variety of sweets that Hussain served. Also, Hussain was one of the first few confectioners who set up a shop in the heart of the Nizam’s city.

“Within no time, the taste of Jouzi Halwa had travelled to all parts of Hyderabad. One day, Mir Osman Ali, who was passing by the shop, stopped to have a plate of the much talked about halwa. The Nizam loved the sweet so much that he named the shop after his brother-in-law, Abdul Hamid, who was then the prince of Turkey,” Anees recounts.

Jouzi Halwa then was regularly exported to Turkey for Abdul Hamid, who fell absolutely in love with the sweet. Today, Jouzi Halwa is exported to almost all parts of the world, not by the confectioners, but by people who come to Hyderabad and wish to take back a memory from the city.

Ahmed says that nobody has managed to replicate the dish that they serve yet.

“A lot of our workers have been poached by other confectioners in the city. Many of them, who worked for years for Hameedi, are now in different parts of the city, in different shops. But no one makes the halwa as tasty as we do,” he claims.

Almost a quintal of Jouzi Halwa is sold every day in the shop. In what may sound like an exaggeration, it takes 16 hours to make one batch of the sweet. Jouz in Urdu means oats. The key ingredient of the sweet is oat milk, which is mixed into a lot of sugar, dry fruits, ghee and zafran (saffron). The mixture is then stirred for 16 hours, workers switching shifts every two hours. What makes the sweet truly unique is the secret hint of spice, which gives a special flavour to the dish. It tastes like a mix of clove and cardamom but Anees says that it’s nutmeg.

“Some 100 years back, nutmeg wasn’t an easily available commodity in Hyderabad. It was brought from Afghanistan and the badam and pista came mostly from Kashmir. Though now we procure all the ingredients locally, the recipe isn’t tweaked a bit,” he adds.

While a kg of Jouzi Halwa is priced at Rs 500, the special version costs Rs 700 per kg. Though the shop mostly caters to bulk orders for functions and events, people also come in to have a quite bite of the Arabi peda, Phika or the Bhuna peda- sweet varieties that taste almost as good as the Jouzi Halwa.

“The ladoos here are also famous,” says Ahmed, adding, “Hameedi was the first shop to make ladoos when Osman Ali’s grandson Mufakhamjah Bahadur was born. From there on, Hameedi became the official supplier of sweets to the Nizam’s palace.”

So, what is the secret ingredient that makes their dish so special?

“There is no secret. We have over 50 workers who make the sweet daily in two shifts. The secret could be that we serve the food with a lot of love, just like Hussain Saheb did,” Ahmed grins. #KhabarLive

‘Surrogate’s Death’ Leads To Concern Over Exploitation In Hyderabad

Will ‘Water Issues’ Impact The Election Results In India?

Can TRS Govt Hold The Rise Of A ‘New Opposition’ In...