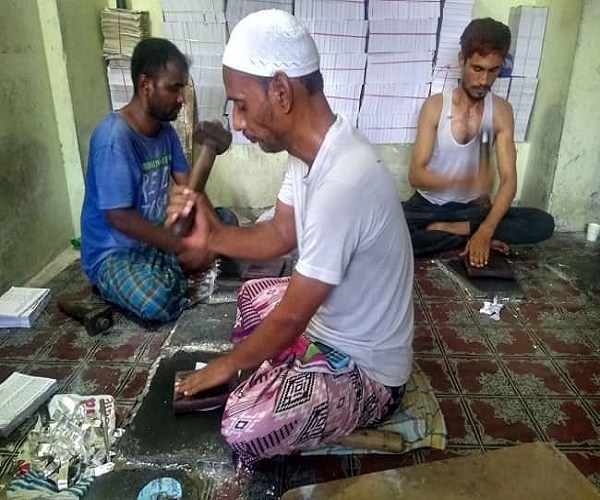 The introduction of machines and a mix of communal politics have put the silver leaf making (waraq) trade on the verge of extinction. This is a dying art in Hyderabad. Need to get a strong support and rehabilitation on war-footing basis.

You can hear them before you see them. Amidst the cacophony of women haggling for bangles, vendors selling sliced melons and pineapples and auto-rickshaw drivers honking through the narrow lanes of Mecca Masjid, it’s almost impossible to miss the measured beats of a group of workers hammering out neat leaves of silver foil. Working in a rhythm, the artisans beckon customers, hammering steadfastly on slender notebook-sized leather packets. 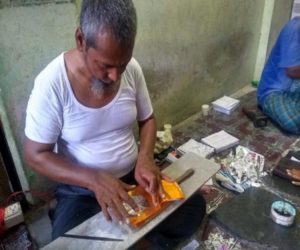 In the Old City of Hyderabad, the number of warq shops has reduced from dozens to a mere four. The shops are located in the vicinity of the arches of Hyderabad’s Charminar. All the day long, the artisans sit inside tiny rooms and pound cubes of silver into ‘warq,’ the thin silver leaves traditionally used as decoration on food in Hyderabad and beyond. Once a thriving business in Old City, the handful of existing warq outlets still do not cease to amaze the crowds on the shopping streets of Charminar.

Most of the warq (leaf) shops, popularly known as ‘Chandi-ka-warq’, date back to the latter part of the Nizam’s rule in the state of Hyderabad. Talking to #KhabarLive, Mohammad Waheruddin, a warq shop owner at Charminar recounts tales from the 1930s to 1940s on why and how the silver leaves became a sign of luxury towards the end of the Nizam’s rule.

“The silver veils were a fixture on sweets, paans and most importantly, the Hyderabadi Biryani. The Nizams, one of the richest royals at the time, considered it a luxury to have silver flakes atop platters of biryani and famous sweets like Shahi tukada, a bread pudding and Badam-ki-jaali, a rich delicacy made of almonds. During the rule of Mir Osman Ali Khan (from 1911 to 1948), food was a big form of entertainment. He wanted to bring shine to the food on his table. Warq thus became a decorative item, a sign of luxury on a rich man’s table,” Waheruddin recounts.

The small cubes of silver are hammered into leaves with the help of leather. Each cube is placed inside a thin wafer-like layer of leather, which is then placed inside a leather bag. Each bag is then pounded with a hammer in a tak-tak rhythm. It’s an art that now rests in the hands of only a few artisans living in the Old City of Hyderabad. 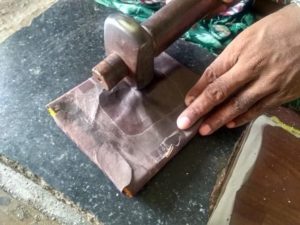 While some say food made warqs popular, others credit the Unani medical practitioners who used silver as an ingredient in their potions. Some of the shops in Hyderabad purely cater to the clinics and hospitals that place orders for silver leaves for their medicines.

“But the medicines haven’t transitioned the nature of our business,” says Akbar, owner of Ittehad Warq. “Gone are the days of the rajas and maharajas. We now get orders only during festivities and marriages where silver is draped over elaborate wedding dishes. You can still find it on Qubani-ka-meetha, an apricot sweet, on barfis and paans, an all-time favourite.”

The dwindling popularity of the warq trade is not just attributed to the changing patterns in food consumption. It’s a mixture of politics and industrialisation, says Waheruddin.

The introduction of machines into the business dramatically reduced both the man-power and time required to create a packet of silver warqs. “In India, the first machine was brought by Baba Zarda, one of the pioneers in the Warq industry. A German-made machine, he then brought it at a cost of Rs 1 crore. Now there are machines made in India available at much cheaper prices. But the machines haven’t added value to the name of the industry, instead it’s merely eating into what’s left of it,” Waheruddin says.

In a major transition, the warqs are now made with plastic leaves in place of leather, laced with chemicals which do the job of 100 workers pounding on a leather bag at a time. 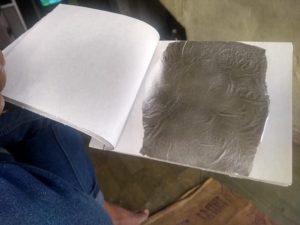 “As the machines entered market, the threat of imposters using scrupulous methods to earn profits increased. Even medical practitioners who place orders sometimes prefer plastic over leather as it’s available cheap and easy. The industry is now trying to hide the adverse effects of chemicals used to treat the leaves, if consumed in large quantities,” Waheruddin says.

Akbar also tells #KhabarLive how it’s just not the machines, but also wealthy patrons, who are besmirching the industry.

“We had a thriving industry until a few years back. But with the increasing animosity between Hindu-Muslim groups in the country, rumours spread and people started doubting the credibility of the silver leaves made on leather.

As the big players entered the scene, they began spreading rumours on how the silver leaves used in food were made using cow leather. This has massively affected our industry as people began placing more trust on the mass-produced products. I, personally, have never used cow hide to make the leaves. It’s usually the hide of the goat that is used. But the rumour spread like wildfire,” Akbar says. 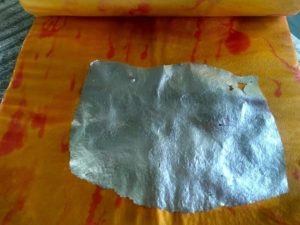 A packet of 300 silver leaves today is sold for Rs 150, while some traders who make gold warqs occasionally earn some quick bucks. The city which once hosted around 100 warq artisans is now home to only a handful, scattered around the vicinity of the lanes of Charminar.

“Any daily wage labourer would earn a minimum of Rs 600-700 per day. We are able to pay only a meagre sum of Rs 450 to the workers. How do you expect the workers to stay when their earnings do not match the bare minimum?” Waheruddin asks.

The few remaining artisans, however continue to pound their hammers, setting a quiet tune in a city that’s growing louder every day. #KhabarLive

‘Get Fashion Upgrade And Clean Wardrobe, All At The Same Time’

NRI Entrepreneurs Flocking Back To Homeland