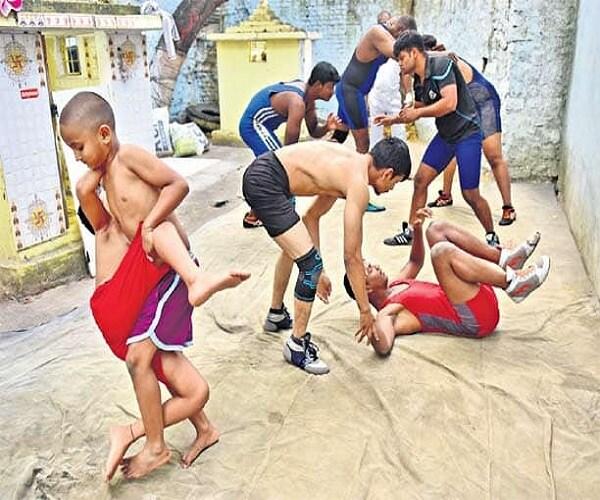 Hyderabad’s Mettu Pahelwan family has created their own identity by continuing the family tradition of wrestling, besides training thousands of others who are interested in the sport. For this family, wrestling has been a tradition for generations.

Their great grandfathers wrestled, their grandfathers did and now even the present generation is continuing the tradition by being into wrestling. In the ever-busy Nampally, ask for Mettu Pahelwan family and one is guided to their residence without having to make a second query. So popular is the noted wrestlers’ family.

Even to this day, as has been the practice for decades, from young boy to the most elderly man in the Pahelwan family, everyone spends a considerable part of the day nourishing their bodies, exercising and honing and improving their skills with rigorous exercise and practice.

Not just for themselves, but the pahelwans make all possible effort to propagate combat sport and train other interested ones. In fact, they have been seeking a proper ‘dangal’ so that upcoming wrestlers could be groomed and help them represent the country on the international stage.

Mettu Shiva, who was initiated into wrestling at a very young age and trained hard for long years, has a long list of achievements. A gold medallist in South Indian contests and a participant in the State competition more than 20 times, he says, “The limelight and attention we receive as pahelwan family is great but it also comes with a responsibility of carrying the mantle of our family legacy.”

Bestowed with several honours, including Ganesh Kesari in 2008, Lala Kesari in 2011, South India gold medallist in 2013 and also Andhra Kesari, Mettu Shiva, in fact, has been bringing home a title or recognition home every year. “My father had won Lala Kesari award and it was great satisfaction for me to have won the same title 26 years later. It was one of the best moments of my life,” he recalls.

None in the pahelwan family believes in simply basking in the glory of victories but work to raise the bar constantly. Says Mettu Shiva, “Every laurel that we won increases our responsibility to the cause of wrestling and we strive more to spread awareness and train more wrestlers,” he says.

Another Lala Kesari title winner in the family is Shanmukh Pahelwan who, over the years, has trained hundreds of young wrestlers. “My initiation into wrestling was different. My brother was trained by our father and he took me under his wings and honed my skills and guided me,” he says.

‘Dangal’ is where his heart is. “Becoming a pahelwan is not easy and it’s a long journey with several hardships that tests one’s commitment. One has to have a lot of patience and dedication,” says the pahelwan who takes pride in having won several titles for the State.

Along with Shiva and Shanmukh, the pahelwan family, including Lakshmaiah, Jairam, Sai Krishna and the youngsters, continue their training and also impart training at Veer Maruti Vyayamshala, the dangal that happens to be the training ground for scores of wrestlers in the city. Many of those trained here not only represented the State in wrestling contests but several of them also entered international contests with Indian colours.

Wrestling is not just a sport but the rigorous practice and training keeps one fit and healthy. “Not just physical fitness, it ensures mental agility and one feels complete with it,” says Shiva.

Their endeavour is to increase the popularity of wrestling, bringing training aspects into the reach of everyone and spur interest in the younger generation. Mettu Shanmukh says, “Wrestling should not be restricted as ‘family tradition’ but become more widely popular and more should enter the dangal.”

That is the reason why the family, as a contribution from their end, imparts coaching free of cost at Veer Maruti Vyayamshala. As several of the aspirants hail from poorer backgrounds, Mettu family walk the extra mile to encourage, help and train the youngsters.

“We tell them about Yogeshwar Dutt, Sushil Kumar and others, and explain how they achieved big in wrestling and won name and fame,” says Shiva. As a motivational effort, they also invite wrestlers from other States to inspire and guide the youngsters.

One thing that does hurt the Mettu family is the generalised connotations of a pahelwan. They desist when it is used in wrong context and for wrong persons. “A pahelwan is a disciplined, dedicated and hardworking person. At times, when a ruffian or a rowdy goes around beating people, some call him a pahelwan. It is a wrong and derogatory representation,” says Shiva.

Hard work behind big achievements
A lot of things go into the making of a pahelwan who is eager to enter the dangal. Take a look at what pahelwans do to keep themselves fit and strong:

Diet
The diet that has to be followed by pahelwans is different from the regular ones, says the Mettu family. The planned diet on an average costs around Rs 30,000 per month and it comes with six bananas every day, one litre milk in the morning and one litre in the night and special almonds which are priced around Rs 1,000 per kg. “Around Rs 10,000 goes only for the almonds,” they say.

Practices
Those intending to become a pahelwan start daily practice early in the morning around 5 am and most of them work for almost six hours with small breaks. The idea is to ensure at least six hours of training that gets more rigorous over a period of time. There are regular contests, usually on Fridays, which are followed by a small rest period before returning to the dangal for more training.

Health issues
Wrestling comes with inherent challenges and risks. To prevent the possibilities of injuries not only during practice but in duels, they have to be extra cautious, alert and agile. “Disciplined training, focus and being alert for every possibility are very important,” says Mettu Shiva. #KhabarLive

Hyderabad May Extend Lockdown Till End Of May As A Measure...