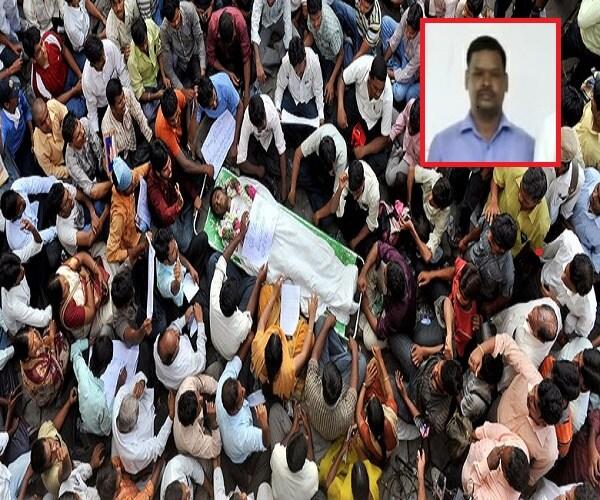 Narsaiah, who has a PhD in Geography, killed himself in the university’s Yamuna hostel. He belonged to the Madiga community, categorised as a Scheduled Caste, and hailed from Paladugu village in Yadadri Bhuvanagiri district. Though Narsaiah did not leave a suicide note, the OU students who observed a bandh in protest against his tragic demise, claim that unemployment was the reason behind the suicide.

Narsaiah was the only earning member of his family. He had three sisters. He had to sustain himself and support his parents with his fellowship amount, says Ch Bhikshapathy, Narsaiah’s junior and a close friend. “He has been trying to get a government job since 2006 or so, but unfortunately couldn’t clear exams. Later, as he couldn’t get any job, he did some odd-jobs and then finished his PhD,” Bhikshapathy says.

Narsaiah finished his PhD in 2017 and was hoping to get a teaching position in his own faculty in Osmania University. Students from the Geography department say that though there were vacant positions for the job of assistant professor, the government did not call in for fresh recruitments. “He was already depressed because of financial problems. He was planning to settle in life by getting married after getting a job. But although he tried his best to get some position, that didn’t happen,” Bhikshapathy says.

According to Manavatha Roy, Chairperson of Telangana State Students’ and Unemployed Joint Action Committee, there are 774 vacant posts for teaching in Osmania University, but the government is not issuing notifications and making any recruitments.

Manavatha Roy says that in the entire state there are 1,58,000 unfilled vacancies out of which 48,000 of them are for teaching posts. “The government is not taking any proactive steps to address unemployment in the state. The only recruitment which happened so far is for the police in the past six years, the other vacancies remain unfilled due to legal tangles, for which the government is to be blamed for discrepancies in the job recruitment,” he alleges.

Gopi, a student from OU, and a member of Telangana Vidyarthi Vedika alleges that the government isn’t keen on filling the teaching vacancies because they want to privatise education: “The government has exhausted its funds on projects like Kaleshwaram and Rythu Bandhu. Now that there are no funds, they want to privatise education for good and outsource the jobs.” Kaleshwaram is the flagship irrigation project of the Telangana government while Rythu Bandhu is a subsidiary scheme for the land-owning farmers.

According to reports, the Telangana government is planning to increase the retirement age of the government employees from 58 to 60, and one of the reasons for it, is to lessen the burden on the state exchequer by avoiding fresh recruitment. #KhabarLive

Locals Fear Unsafe On ‘Rape Killings’ in Shamshabad Area Within A...