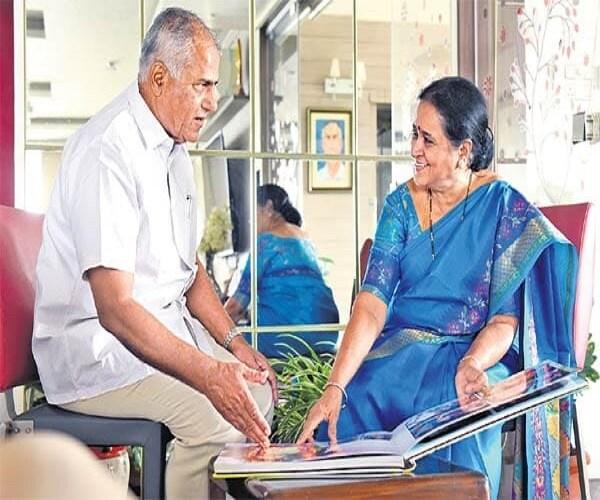 Losing a spouse or getting divorced is one of the most difficult things a person can experience. But if the widowed or divorced single person is able to move on and find love again, it can mark a brand new chapter in his or her life.

With an intention to do something because of what she had lost in her life, NM Rajeshwari started ‘Thodu Needa’ – an NGO for senior citizens, with matrimony as one of the main aims.

“When I was 30, I became a divorcee with three children who were then in high school. Divorce was not easy then, while now it’s quite common. In those days, divorcees were considered as bad omen, people used to gossip, and women themselves were apprehensive to talk to me. I was only a Class X pass candidate when I got divorced. Later, I completed my degree, MA, MEd and took up job as a government teacher, and brought up my children. I was single for 33 years, until I found my husband at the age of 62,” says Rajeshwari who married 65-year-old Damodar Rao in 2012.

After her retirement as a Girl Child Development Officer, Rajeshwari used to meet two of her other friends who were single. It was then that she thought ‘why not plan some travel and staying together for only women who want to explore the world safe and securely’, and she started ‘Aananda Yatra’ and ‘Community Living’ and there were no men involved.

After some time, she observed that women who were widowed or divorced always wanted to lead a new life, where they can share their emotions with their partner.

She also noticed that they were only thinking about the society and what would the family members think, whereas men would have two to three marriages though they were in their 70s. And that’s how Thodu Needa took shape.

People showed interest in senior citizen marriages as they felt marriage was some kind of ‘permanent relationship’. Even Rajeshwari never thought of re-marrying.

ALSO READ:  'Gandipet Aka Osmansagar' Recaptures Past Glory As The Lake Boasts Of Healthy Reserves And Constructive Plans

“My husband enrolled himself in Thodu Needa in 2010, and I was searching for a suitable match for him, but destiny had its own plans. And one fine day, in 2012, he said I can’t get a better, matured, responsible lady than you and as I had my mother to take care of, we spoke to our respective children and they wholeheartedly accepted our decision and marriage,” says Rajeshwari.

She recalls that when she initially called for a meeting, many people from different parts of United Andhra Pradesh turned up and the ‘senior citizen matrimony meet’ was an instant hit.

Rajeshwari who encourages the senior citizens to discuss their wish with their families, has, till date, helped 150 couples get hooked. The minimum age to enrol in ‘Thodu Needa’ is 50 and maximum age is 75. People should register themselves with an application form and submit the divorce or death certificate of their spouse and then they are allowed into the group. People of all castes and creeds join the NGO.

“Whenever we conduct the meetings, the senior citizens come, spend time, and in one or two meetings find their ‘second innings partners for life’. Once they come to an understanding, if they feel they can go ahead with their marriage, they take a medical test so that it would be beneficial to both partners,” says Rajeshwari, who says many marriages were stopped because of their children and property issues.

Thodu Needa encourages senior citizen live-in relationships as well, and the NGO also allows the elderly to choose a live-in partner. Marriages are not mandated for those who seek a companion instead of a spouse.

As per the Supreme Court judgment of 2011, such relationships are legally accepted. “There is a lot of change in the society, and children are now willing to understand their parents and realised that the elderly too need emotional support, and are approaching us. This is a positive change,” concludes the ‘Bravery and Courageous award’ winner. #KhabarLive