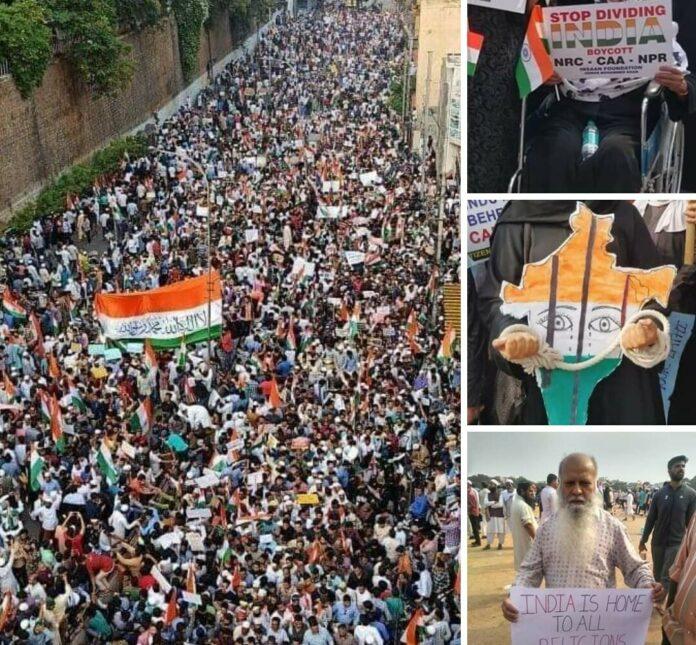 Thousands of citizens turned up to protest against the contentious Citizenship Amendment Act (CAA), National Register of Citizens (NRC) and the National Population Register (NPR) at the Dharna Chowk in Hyderabad. The “Million March” protest drew people in large numbers with the police even having to open the doors of the NTR stadium to accommodate the crowd.

People, from all walks of life, had started to gather at Dharna Chowk as early as 10 am on Saturday. From children to women and men, people even in their seventies, the protest saw a huge turnout as the crowds continued to pour in even at 4:30 pm when the protest was almost coming to a close. Chants of “We want justice”, “Hum leke rahenge azaadi” and “Modi chor hain” rang in the air as people marched from Lower Tank Bund to Dharna Chowk.

ALSO READ:  Why Justice Elusive In Telangana As No SHRC, No Lokayukta And Defunct SCPCR?

Holding a placard that reads “India is Home to all Religions”, 65-year-old Hussain at Dharna Chowk tells #KhabarLive that this is the first time that minorities in the country are living in the fear of being persecuted.

“First, they implemented demonetisation. Now, they are forcing a citizen as old as I am, to protest against an Act which will ask us to prove our citizenship. Why does our Prime Minister want us to wait all day long in queues in hope of documents and papers that will prove we are indeed citizens of this country? We hardly earn enough working hard every day and now this government will force us to leave behind our jobs and wait in queues,” Hussain says.

Speaking to #KhabarLive, Pawan, a freelance software developer, said he reached Hyderabad from Vizag on Friday to take part in the Million March protest.

“I reached Dharna Chowk at 10 am and I am really happy that people have turned out in such huge numbers. In Vizag, where I live, people do not know what CAA is or how it can affect the minorities in our country. People in Telangana are leading the way by protesting against an Act that challenges the very secular fabric of our country,” the young man said.

Women, including housewives and the elderly, too gathered in large numbers and occupied space inside the stadium, chanting slogans and urging more women to join them. While many women were seen leading marches, there were also young mothers who sat at the protest venue along with their toddlers.

“We are not concerned about the results this march would yield. We do not know if our protests are heard by the leaders who sitting at the Centre. But when the government threatens us to prove our citizenship, it is our duty that we take to the streets and fight for our rights,” a middle-aged woman, who didn’t wish to be named, told #KhabarLive.

The protest also saw a variety of anti-CAA, NRC and NPR posters. While some made fun of Amit Shah and asked him to understand the “chronology” of events, many posters condemned the government for forcing them to hit the streets along with their aging parents. People also used humour to make fun of people who had not turned up for the march.

As people kept waving the Indian National flag at the protest venue, portraits of Ambedkar also found a place and slogans to free the Bhim Army Chief Chandrasekhar Azad from jail was also heard.

It was only ten days ago that the Rashtriya Swayamsevak Sangh (RSS) had held a massive show of strength in Hyderabad. Holding sticks in their hands, RSS members marched from LB Nagar to Sarooranagar stadium bringing the traffic in the stretch to a complete halt. The march was held when a prohibitory order was in place to prevent any protest rallies against the CAA in the city. #KhabarLive