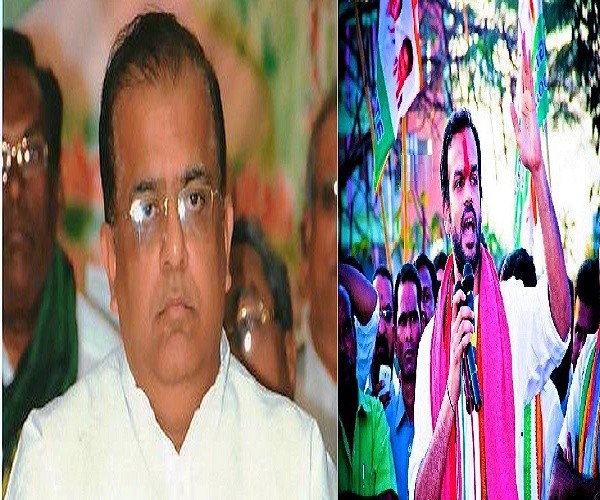 The Telangana Congress suffered another blow on Wednesday, with senior leader and former state Minorities Commission Chairman Abid Rasool Khan resigned the party. He was the Vice President of the Telangana Pradesh Congress Committee. He will be joining the Telangana Rashtra Samiti (TRS) in the presence of the caretaker Deputy Chief Minister Mohammad Mahmood Ali, Minister KT Rama Rao, and MP Kavitha Kalvakunta. And Youth leader Kartik Reddy too resigned and joined TDP.

In his resignation letter to Congress President Rahul Gandhi, Rasool said that he was hurt and was resigning based on two reasons — the appointment of Shaik Abdul Sohail as the Chairman of the Minorities Commission, who he called “a person with no social standing and a shady background”; and the fact that Congress appointed working presidents from the Reddy, SC, Kamma and BC communities, but none from the Muslim community. “15-18% of the Muslim Population has no Importance in front of the Party LEADERSHIP. Their votes are needed by the party does not wish to empower them (sic),” he wrote in his resignation letter.

Furthermore, he alleged that the party is “controlled by Sanghi’s wearing Khaki within the Party”.

Prior to his resignation, Rasool had said that the party, in all the districts that they have chances of winning, should give tickets to Muslims in one of the constituencies of that district.

The Congress has released the names of 75 candidates so far, out of which only four have been allotted to the Muslim community. Out of these four, three of these are in Hyderabad’s Old City area.

The Congress is part of the mahakutami, the grand alliance with the Telugu Desam Party (TDP), the Communist Party of India (CPI) and the Telangana Jana Samiti (TJS). The Congress party, which is heading the alliance, has already announced that it will contest 93 seats, leaving 14 seats to the Telugu Desam Party (TDP), 8 seats to the TJS and 3 seats to the Communist Party of India (CPI). The TJS, however, announced it will be contesting in 12.

Meanwhile, former minister Sabitha Indra Reddy’s son, Patolla Karthik Reddy, who was with the Congress’ campaign committee, sent his resignation along with the resignation of all his supporters after the Rajendranagar seat he vied for was allotted to the Telugu Desam Party, as part of the Mahakutami.

The Telangana unit of the Telugu Desam Party announced its candidates for two more assembly constituencies — Sama Ranga Reddy for Ibrahimpatnam and Ganesh Gupta for Rajendranagar, taking the total count to 11 candidates being announced out of the 14 seats it has been offered in the Mahakutami.

Speaking to #KhabarLive, Karthik said, “This is a Congress winning seat, and so is Ibrahimpatnam. My matter of concern is, how do you give away a winning seat to your allies? Let’s [say] that even if you give to your allies they would win that seat, but that’s not true. The TDP will not win in Ibrahimpatnam and Rajendranagar. Neither do they have strong candidates and nor do they have a vote bank. On what basis did they give those seats? Am I not answerable to the workers who have been working for the party for so long,” he said.

He added that he wasn’t worried that he was not picked as the candidate, and would have accepted it if the Congress had picked someone from the party.

Angry because Karthik was being denied a ticket, his supporters vandalised the party office at Shamshabad. They tore party posters and raised slogans of ‘Karthik Anna Zindabad’.

Karthik is the son of former Home Minister Sabitha Indra Reddy, who is contesting on a Congress ticket from Maheshwaram. When asked about how his resignation will affect his mother, Karthik said, “You also should take Rajendranagar as a unit. It’s a unit by itself. This is not Maheshwaram or Chevella. This is an issue related to Rajendranagar where I have been working, where I am answerable. I respect my mother’s chances, I would not jeopardise whatever it is with regard to her. But what about the personal promises I made on the ground?” he asked.

Karthik has earlier claimed that Telangana Telugu Desam Party chief L Ramana sold the Rajendranagar seat. To this, he responded that incumbent MLA Prakash Goud has proclaimed that Karthik will not get a seat, and he was suspicious.

“Prakash Goud has been saying it for the last two months in every speech that ‘Karthik will not get the ticket. He won’t get the seat. Karthik won’t contest, the seat is for us only.’ Why won’t I be suspicious? How does an opposition MLA have the guts or the gall to say that I won’t get the ticket, on what basis? This is for Prakash Goud and L Ramana to answer,” he said.

When asked if he would contest as an independent, Karthik said that while the decision is yet to be taken, his cadre has begun preparations. The last day for filing nominations is November 19.

“That decision will be taken, We’ll convene a meeting and decide on that day. As of now, the prep by cadre is being done for me to contest as an independent. They are more adamant than me, so let’s see on November 18,” he said.

When asked if he will return to the Congress if they reach out to him, Karthik said, “Right now, I am agitated. There are certain answers I need. As long as they don’t answer my questions, I’ll stick to my stand,” he said.

Addressing a gathering of his supporters in Hyderabad after announcing his resignation on Thursday, Karthik said, “There is pain in all of us. I don’t have personal pain that I was denied a ticket, but I just worry that the TRS candidate will win. When TDP got the B-form yesterday, it was the TRS which celebrated. Telangana TDP President has approached senior Congress leaders and lobbied for the ticket for his own personal gain. Is this why we joined the Mahakutami?” he asked.