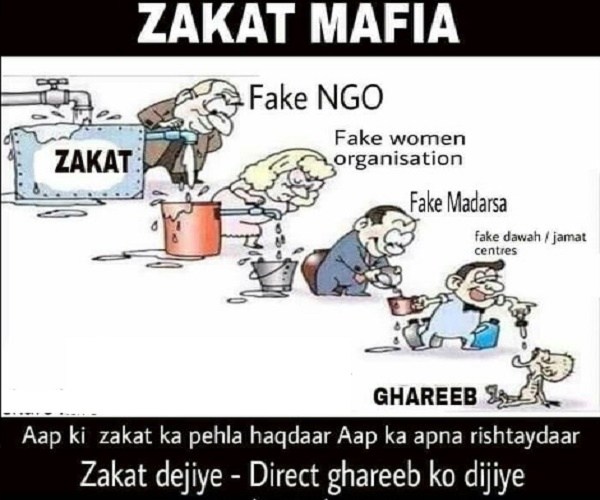 Rich Muslims, especially the Indian expatriates have donated approximately over Rs 1000 crore in the last decade. The administrator of one well-known charitable institution, in a recently published interview, has confirmed receiving Zakat of nearly Rs 100 crore which was spent on education of poor Muslims. There are innumerable institutions who have been collecting crores of rupees from the NRIs and other rich Muslims towards Zakat and other donations.

ALSO READ:  Ignore Rural Anger at Your Own Peril

Those who donated their hard-earned money must ask these questions to the institutions with whom they have been depositing their donations every year. They must also check the ownership details of properties purchased by those institutions and their administrators.

#KhabarLive did not refer to any specific institution and was careful about naming anyone. we fully agree that not all institutions are fake. Here we mention about some cases wherein poor Muslims have become professionals. And we intend to share the exact numbers
from the donors, contributors. Only then, we can analyse whether we are able to get the desired output from the crore of rupees being spent on the welfare of poor Muslims.

#KhabarLive won’t name it, but most of us know that a well-known charitable institution, has published huge advertisements in leading newspapers. The advertising cost of several lakh rupees was not paid by individuals, but it went from the Zakat amount. The
administrator of a top Madarsas purchased properties worth several crores on his and his family’s name from the Zakat and donations that he collected for the institution.

These are just a few instances. One institution has wasted lakhs of rupees in “transportation” of Iftari while crores were spent on distribution of 250 gm each of Qurbani Meat among “beneficiaries”.

Those giving donations are also responsible for these scam. They never cross-checked how their money was being utilised. It is high time that we insist all institutions to publish their balance sheets and complete details of beneficiaries.

Especially the donors, must ask the balance sheets of institutions receiving funds. Many institutions have inflated figures of number of students. At one side, they are collecting donations and Zakat from the rich Muslims and on the other, they are using the numbers
to enjoy benefits from government schemes like Sarva Sikha Abhiyaan, Mid-Day Meal Scheme and others.

In fact, #KhabarLive can present a list of over a dozen big institutions/individuals involved in such frauds. However, we’re unable to expose them immediately as #KhabarLive still in the process of collecting evidence. Such faces will be unmasked soon. This is just a tip of iceberg! #KhabarLive

How ‘Big’ And Useful Are The ‘Nutraceutical Products Market’ In India?