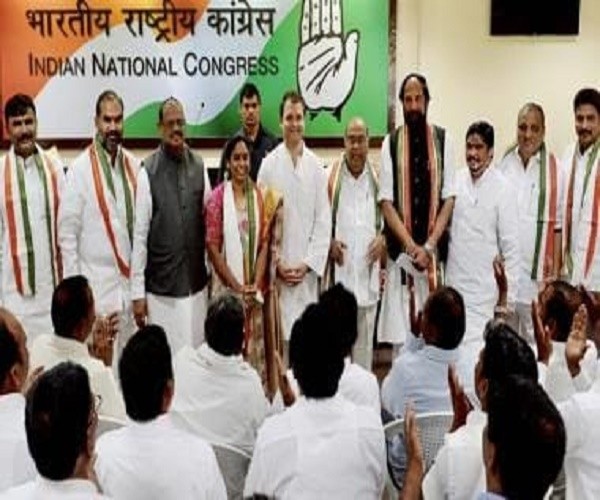 In keeping with the way the Telangana Congress has always functioned, unveiled were nine jumbo committees, most of them accommodating more than 30 leaders.

Once a Congressman, always a Congressman. That seems to be the adage the grand old party believes in. Nothing else can explain the presence of former (united) Andhra Pradesh assembly speaker KR Suresh Reddy in as many as three Telangana Congress committees, which were announced on Wednesday evening. Reddy found a place in the coordination committee, manifesto committee and the election committee.

That 24 Akbar Road was oblivious to Reddy having switched sides to the Telangana Rashtra Samiti (TRS) on September 7 showed the disconnect between New Delhi and Hyderabad, just weeks before Telangana is to go to polls. After the faux pas was exposed, a revised list was put out by the party high command.

In keeping with the way the Telangana Congress has always functioned, unveiled were nine jumbo committees, most of them accommodating more than 30 leaders. Perhaps a way to massage jumbo egos. Almost as if out to prove the TRS jibe that the Congress has 31 chief ministerial aspirants, one from each district. For the record, Telangana Congress president Uttam Kumar Reddy defends political ambitions of Congress leaders, saying more aspirants mean a more qualified party.

Like it was done in Karnataka, the number of working presidents has been increased from one to three, to accommodate caste equations. So Dalit leader Bhatti Vikramarka who is the lone working president now, has to share workload with Revanth Reddy, who joined the party recently from the Telugu Desam and former Karimnagar MP Ponnam Prabhakar, a senior BC leader.

Will this arrangement make Revanth Reddy happy since he was eyeing the post of the campaign committee chairman? Unlikely because the campaign committee chairman along with the PCC chief is often seen as the face of the election campaign. That post has been given to Vikramarka, perhaps in a bid to effectively woo the Dalit vote in Telangana. It is also an attempt to downplay the perception that the Congress is essentially a party of the Reddy community.

But beyond what seems like caste equations being taken care of, are personal ambitions and political manoeuvres playing out. It will suit Uttam Kumar Reddy to have Vikramarka as the campaign committee chairman instead of a firebrand leader like Revanth Reddy. That is because a Revanth Reddy touring all 119 constituencies would pitchfork him as one of the strong claimants for the top job in case the Congress puts it past the TRS.

That would not be music to Uttam Reddy’s ears since the former Indian Air Force pilot would want to be first in queue. In contrast to Revanth Reddy, Vikramarka is seen as a more mellowed personality.

Which explains Revanth Reddy’s reaction to his appointment. He emphasised on his desire to see a Dalit CM of Telangana from the Congress party. That this was directed at the PCC chief and the many other Reddy and BC community claimants, was not lost on anyone.

But within the seniority-obsessed Congress, the fact that Revanth Reddy who is a newcomer to the party and has still been made working president is cited as a big deal. Congress sources say there is also the worry about how the party will react if the Anti-Corruption Bureau pursues the cash-for-votes case against Revanth Reddy.

In 2015, Reddy as a TDP legislator was caught on camera allegedly offering a bribe to Independent MLA Elvis Stephenson to coerce him to vote for the TDP candidate in the MLC elections. He was arrested and spent a month in Hyderabad jail before securing bail.

Then there are wheels within wheels. The committees seem tilted in favour of south Telangana. Both Revanth Reddy and DK Aruna, who is co-chairperson of the Campaign committee are from this region. Prabhakar is the sole big ticket Congress warrior from the northern belt.

Film star-turned-politician Vijayashanti has been appointed as a star campaigner, a position Revanth Reddy would have liked for himself. The leadership perhaps thinks her star appeal and her track record of having acted in movies set in rural Telangana, will come in handy. But Vijayashanti who has been in the BJP and TRS before, has been largely dormant in the Congress and it will take some doing for her guest appearance to click with the electorate. #KhabarLive

Why ‘Hyderabad Cricket Association’ Always In ‘Serious Allegations’ Of ‘Corruption And...