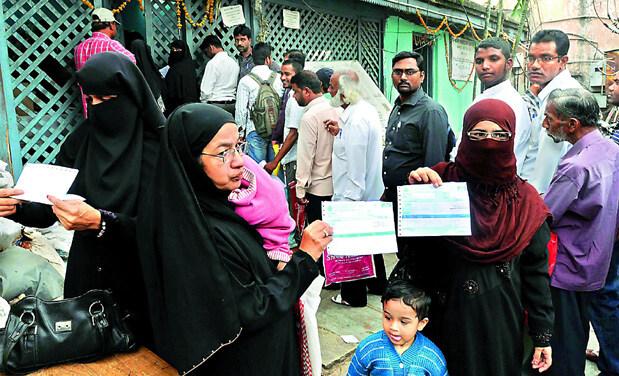 The growing fear of NRC in entire India makes Hyderabadis more scary to get the required documents for the official verification process. The women run pillar to post to get the birth certificates issued by competent authorities as per the laid NRC rules. Hence, official machinary unable to gear for heavy rush. And touts are getting their business to meet the demand.

A group of women stand outside the Greater Hyderabad Municipal Corporation (GHMC) Circle office at Hyderabad, huddled around Ali, who is busy going through the documents required to get a birth certificate.

The women had approached Ali, a tout, for his service of pushing documents in the GHMC office at a faster pace for a fee. All the women #KhabarLive spoke to were applying for their birth certificates as a precautionary measure keeping in mind the National Population Register (NPR) and the National Register of Citizens (NRC).

The tout charges Rs 500 from each woman and Rs 300 for processing certificates of children.

“If you have even one of your address proofs, I can get the documents signed from officials and can get it done fast for you. The more documents you have the easier it is to get a birth certificate,” says a confident Ali who has been a tout at the GHMC and adjoining Road Transport Authority (RTA) offices for over a decade now. The efforts by the state to digitise and make government services cashless to keep a check on graft has had little impact on the business of touts like Ali.

Since the passing of the Citizenship Amendment Act in Parliament in December, and the announcement of the NPR exercise in April this year and a nationwide NRC in the future, there is fear among the Muslim community in the poorer neighbourhoods of Old City. Just as 19 lakh people were excluded from the NRC in Assam, several residents in Hyderabad fear that if the exercise is repeated in the rest of the country, they could be excluded from the final list due to lack of documents.

“People are flocking to the GHMC offices. There is a sense of panic among the residents in my constituency. We are also asking people to get their papers in order,” said the Charminar MLA Mumtaz Ahmed Khan earlier to #KhabarLive.

The rush from the public to get their documents made and corrected has been good for tout business. “Yes, there is a large number of people who are concerned and want to get their papers in order, just to be safe,” Ali adds.

Pushpa* a contract staff at the Customer Service Centre of the GHMC has been witnessing a high number of enquiries from the public related to the documentation required to prove their citizenship in the NRC. This even as the Centre maintains that no decision has been taken on a nationwide NRC.

“I have no clue what documents are required,” says Pushpa, who instead just asks those enquiring if they have a birth certificate,” If they don’t have then I ask them to apply that’s the best I can do,” she adds.

Every time a person goes to get a birth or a death certificate at the GHMC circle office at Khairathabad they are made to pay Rs 20 as registration fee. Although most pay up without a fuss, the law clearly states that a nominal fee can be collected only if the application is being made after 21 days of birth or death being reported.

Akshay Kumar, a social activist had gone to the GHMC office to get a death certificate of his relative who passed away on December 18 and paid Rs 20 to get his application processed, he was even issued a receipt for a government service that is free of cost.

It was only when he went to collect the death certificate Kumar realised that something was not right, “They collected Rs 20 from me again for each printout, some people take four or five print outs. They are collecting some Rs 80 to Rs 100 per person and don’t issue receipts for this,” alleges Kumar. Even the initial receipt for registration was taken away and dropped in a wastebasket after the death certificate was issued, he alleges.

“Touts have been a problem at GHMC offices for a very long time but taking money illegally from the public is a new low for the GHMC,” alleges the activist. The officials at the GHMC office say they are acting as per instructions from the higherups and refused to answer any questions.

GHMC officials in charge of the office and zone were unresponsive. #KhabarLive

Ahead Of General Elections, ECI Panel Says ‘No Political Ads’ On...