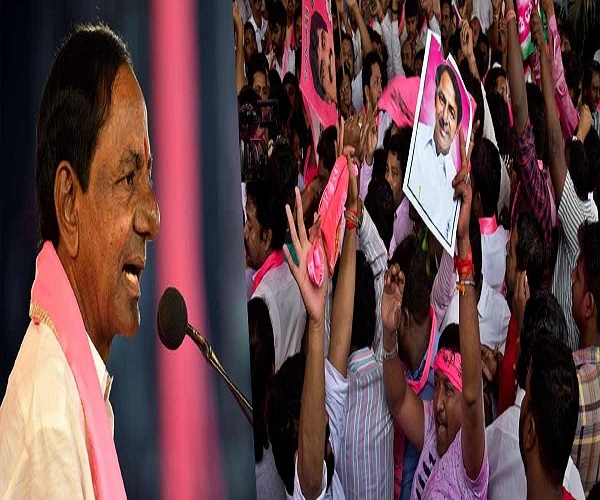 It looks like TRS is set for a massive victory in Telangana. India’s youngest state will likely see a Telangana Rashtra Samithi-led government for the second consecutive time, as the party is leading in 93 seats in the 119-member Assembly, at the time of writing.

The Prajakutami — comprising the Congress, the Telugu Desam Party (TDP), the Communist Party of India (CPI) and the Telangana Jana Samithi (TJS) — has been decimated; they’re leading in just 18 seats.

ALSO READ:  Aim To Defeat TRS In Telangana Elections, A 'United Front' Or 'Maha Kutami' In The Making?

During campaigning, the TRS was confident that they would win over 100 seats. The party, which came to power in 2014 with 63 seats, had 90 seats following a slew of defections. In the 2014 Assembly elections, which were held simultaneously with the Lok Sabha polls, TRS polled 33% votes, bagging 63 seats, while the Congress secured 21 seats with 24% votes. TDP and its then ally BJP secured 15 and five seats respectively with 21% votes (TDP 14%+BJP 7%). The YSR Congress had polled 3% votes and bagged three seats. Others and independents had 11% vote share.

K Chandrasekhar Rao dissolved the Legislative Assembly on September 6, eight months before the government’s term would end in May 2019. Political observers said that the TRS was keen to go in for early polls as they believed that simultaneous Assembly and Lok Sabha elections may not help it properly highlight the welfare and developmental works undertaken in the last four years.

The mandate for this election was to see if the people were happy with the rule of the party after the bifurcation of Andhra Pradesh in 2014. The party, which decided to go to the polls alone and not opt for a pre-poll alliance, had been confident of a victory.

Four-and-a-half years after forming the first government in the newly created Telangana, riding on the Telangana sentiment, the TRS made a determined bid to retain power on the basis of development and welfare schemes such as Mission Bhagiratha, the two-bedroom housing scheme and the Rythu Bandhu scheme. #KhabarLive

Why ‘Farmer Suicides’ Continues In Telangana Despite Several Welfare Schemes?