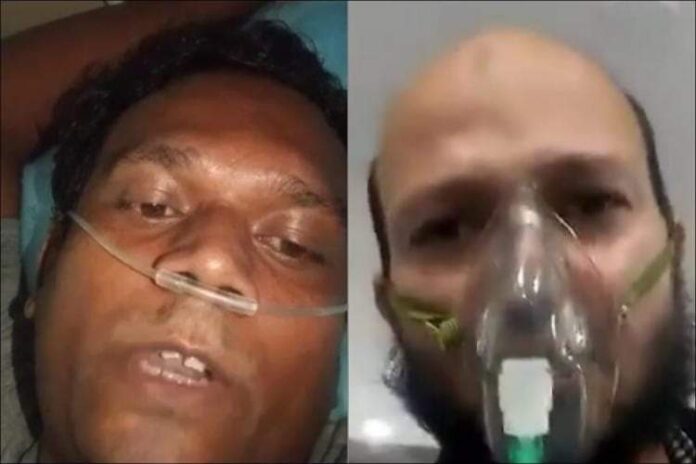 The sheer negligence by doctors and medical support staff along with patient anxiety kills two lives in prestigious Government Chest Hospital in Hyderabad. As the matter get complicated with two videos within a week. And hours after 36-year-old Syed Ahmed recorded a video from the COVID-19 ward of Hyderabad’s Government Chest Hospital, alleging lack of medical care, he succumbed to his infection.

In a video sent to a friend on June 28, just hours before his death, Syed showed a deserted ward where no one can be seen. Wearing an oxygen face mask, he is heard asking:

“See Waseem, no one is here except me. See how big it is — see, see, see, there’s no one here. I am alone. Nothing here. You decide, how will I stay here? What if something happens?”

Syed was the second patient in a week in Chest Hospital to record a video alleging negligence hours before he passed away. Earlier this week, another COVID-19 patient Ravi Kumar complained of breathlessness in a video and alleged that he was not being given proper treatment — and said goodbye to his father, hours before his death.

.@KTRTRS Sir, Yesterday it was Ravi Kumar & today Syed both #Covid-19 patient admitted in Chest Hospital, Erragadda died begging for medical help, When will your Govt wake up and take action, How many more you want to die begging for help.@Ashi_IndiaToday @sushilrTOI pic.twitter.com/pNWENZ7tKk

A resident of Sriram Nagar under the jurisdiction of the Jubilee Hills police, Syed was a bodybuilder and is survived by a wife and six sisters after his father and his son passed away a few years ago.

He was admitted to the Chest Hospital in the afternoon of June 26. On June 28, at around midnight, he shot the video which is now being shared widely on social media.

By next morning, he had succumbed to COVID-19.

“He was having breathlessness and that’s why he brought him here (to Chest Hospital). Doctors were just giving injections and now they have called us at 5 am and said that he died. He was doing just fine. He only had breathlessness. We suspect that treatment was not done properly.” his wife, Fareen told #KhabarLive.

Speaking to #KhabarLive, Syed’s brother-in-law, Pasha, said, “He had video called us earlier and he was scared as he was all alone. He said that he was afraid. He was complaining about lack of facilities.”

“The doctors said that his sugar levels had increased and blood pressure was fluctuating, which is why his condition worsened rapidly. But we still don’t know what exactly happened inside,” he added.

The family is yet to get his COVID-19 test results, they say, but the burial was done as per norms set by the Greater Hyderabad Municipal Corporation (GHMC) for victims who tested positive for the coronavirus.

Speaking to #KhabarLive on Wednesday, Chest Hospital Superintendent Mahaboob Khan said that in Syed was a case of myocarditis (inflammation of a heart muscle), which led to heart failure, that was the cause of death.

“The complications have arisen as the virus seems to be changing — whether it’s the genome or morphology. We are seeing it affect the heart and many independent cardiologists are also giving statements on this,” Dr. Mahaboob Khan said.

“That’s why earlier, 90% of the patients were having only fever and cough. Now, we are seeing symptoms like loss of appetite and taste as well. Apart from cardiac issues, more cases with Gastroenteritis i.e. vomiting and diarrhoea are also increasing,” he added.

In a video released following Ravi Kumar’s death earlier this week, the Chest Hospital Superintendent had said that they were seeing an influx in COVID-19 cases with such complications, especially in people aged between 35 and 45.

The Chest Hospital has maintained that Ravi Kumar died not due to a problem related to his lungs, but rather his heart.

Opposition demands probe
With two videos surfacing from the same hospital, opposition parties in the state demanded a probe into the issue.

Senior Congress leader Mohammed Shabbir Ali said that the videos “exposed the lack of treatment facilities at hospitals and the negligent attitude” of the ruling Telanana Rashtra Samithi (TRS) government.

Amjed Ullah Khan from the Majlis Bachao Tehreek (MBT) said, “There are several lacunae in Ravi’s case. Firstly, why was he not treated properly and secondly, how could the body of a suspected COVID-19 patient be handed over to the family before the test result? As a result, all those who attended the last rites are now exposed to the disease.”

On the second video, Amjed said, “There were no doctors or health staff. Syed was suffering all alone. On one hand, there are no beds in private hospitals. Even government hospitals are turning back people. However, in the video, it shows that the beds are totally empty. So what is the truth?”

Demanding that a sitting High Court judge look into the issue, he demanded a compensation of Rs 25 lakh for the kin of the deceased, and said that the deaths were a result of government negligence.

Telangana Health Minister Eatala Rajender’s response to Ravi’s video earlier this week did not go down well with opposition parties.

In his response, Eatala had said, “These days, there are a lot of allegations of negligence in government hospitals in social media. We are providing internet facilities and cell phones to the patients so that they can interact with their families…but some people are misusing this to record videos.”

In a statement, Telangana BJP Chief Spokesperson Krishna Saagar Rao said, “It is clear that the TRS government is working only in its self interest and not in the interest of the common and poor people of Telangana.”

“Instead of taking action on those who removed Ravi Kumar from the respiratory support system which caused his death, the minister brazenly attacked the young man who died due to negligence, for having shot the video. BJP feels this kind of heartless, uncouth and irresponsible behaviour is unacceptable in these challenging times of public health crisis,” he added. #KhabarLive #hydnews