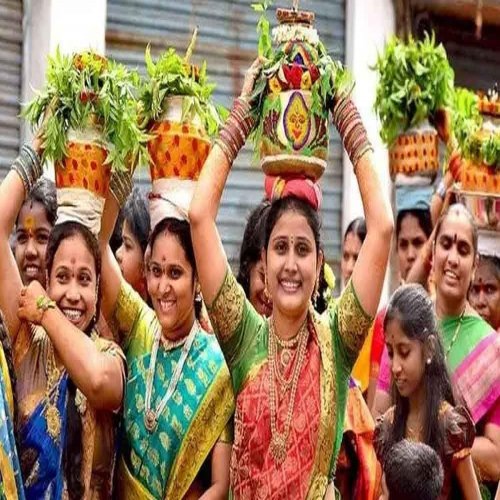 Even as the government is yet to take a decision on organising the Bonalu festival, the process has already begun in the city with temple authorities forming committees for the State festival in June-July.

The traditional Bonalu is celebrated as the State festival by the government during the months of June and July. Government is yet to take a decision on celebrating the festival as temples witness mass gatherings during the festival time, which comes in way of maintaining social distancing. Government also earmarks funds for the temples in Hyderabad and Secunderabad.

However, the temples in the city are going ahead with their plans for celebrating the festival. According to the temple committee members, Bonalu festival will be starting from June 25, the first Thursday of Ashada Masam from Golkonda Fort and at different places in the city on every Sunday during the month.

The Bonalu would be celebrated at Ujjaini Mahankali temple in Secunderabad on July 12 and 13, in Old City on July 19 and 20. The festival would end on July 20 with a colourful procession from the Old City to Puranapul. The temples in Old City constitute a joint temple committee called ‘Sri Mahankali Jatara Bonalu Utsavala Ummidi Devalayala Uregimpu Committee’ for celebrating the festival on a grand scale every year. This year the committee was formed and a chairman was elected by the members.

The committee appointed J Madhusudhan Goud as the chairman. The committee which met recently decided to celebrate the festival on a grand scale this year too. However, the committee also decided to follow the guidelines of the government keeping in view the coronavirus pandemic.

The Ujjaini Mahanakali temple authorities also met Ministers A Indrakaran Reddy and T Srinivas Yadav recently and said that they would be taking up ‘Lashkar Bonalu’ festival on July 12. The Ministers reportedly assured of help from the government. #KhabarLive #hydnews #Bonalufestival

Why TDP Extends Support To Congress In Telangana LS Elections?