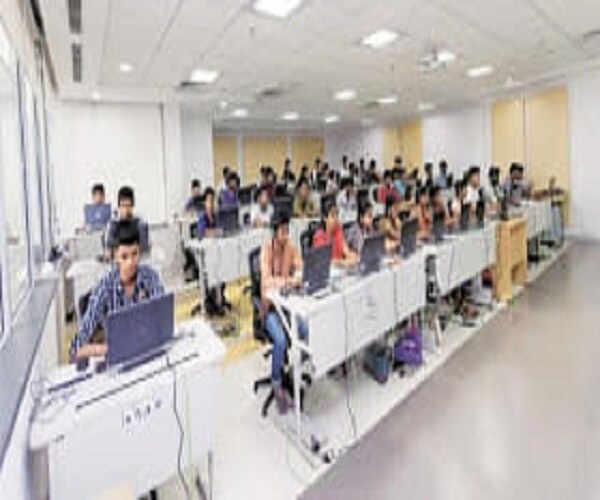 Even as most other firms seek talent from top-ranked tech institutes, Zoho Corporation hires high-school graduates and trains them over 18 months. Not inclined to pursue his studies beyond high school, 17-year old Abdul Alim dropped out of school in 2017. Unable to find a job in his hometown in North East India, Alim moved to Chennai in the South with nothing more than Rs 200 in his pockets.

He spent months job-hunting before fate finally brought him to the gates of Zoho Corporation, a software products maker, as a security guard. Four years down the line, Alim still works at Zoho, but he no longer mans the gates. He is part of the company’s reports team, and spends his days using code to create charts and data visualisations.

Alim isn’t alone. Several high school graduates and dropouts like him are today part of the software firm, headquarted in Chennai, catering to global customers.

Zoho was founded in 1996 by Sridhar Vembu, an alumnus of the Indian Institute of Technology Madras. The company makes cloud-based products such as Zoho Mail, Zoho Docs (like the one Google offers), accounting software Zoho Books, and some 30 others which are used by companies such as Amazon, Suzuki, and Air Canada. It earned Rs 1,557 crore in revenue in the 2016 financial year, according to company research platform Tofler.

Even as most other firms seek talent from top-ranked tech institutes, this company, through its Zoho University initiative, turns software programmers out of high-school graduates and hires them for roles at salaries on par with engineering graduates.

Zoho’s decade-old model is now gaining traction amidst the shortage of quality engineering talent in India, accentuated by the proliferation of automation and advanced technologies.

Unfinished products
“Zoho University was born 12 years ago because we found that there wasn’t much that these vaunted engineers were bringing to the table,” Rajendran Dandapani, Zoho evangelist (someone who builds support for a given technology) told #KhabarLive in an email. “We couldn’t blame them either. The problem seemed to lie in the system, the context-less education they were getting, on irrelevant subjects based on obsolete curricula.”

The company’s strategy is fairly simple. Zoho visits government-run schools in and around cities such as Coimbatore, Madurai, Pollachi, and Chennai in the South Indian state of Tamil Nadu, Hyderabad and Vizag in Telangana and Andhra Pradesh and conducts aptitude tests and interviews. Those who qualify are offered seats for the 18-month programme at Zoho University, and a job at the end of the period, subject to successful completion of the courses.

“Nowadays people don’t get jobs easily…I would like to enter the industry as soon as possible rather than wait four years,” said Anirudh R, referring to his decision to join Zoho University after completing high school in Chennai.

At Zoho University, recruits are taught English, mathematics, software engineering skills, and programming languages. Around 500 persons have so far been trained there and around 100 students are enrolled right now. The institute itself is housed within Zoho’s offices in Chennai and in Tenkasi, a small town at the foothills of the Western Ghats in Tamil Nadu. This proximity to the employees and management teams seeking skilled recruits allows the company to monitor and update the syllabus regularly.

ALSO READ:  Why TRS Leaders Are 'So Irresponsible' As Home Minister Mahmoud Ali Other MLAs Gets Covid-19 Positive?

“When we began in 2005, we taught PHP, MySQL, and Java. The latest batch, on the other hand, began learning Python, moved to Java with Postgres, mobile development etc,” said Uma Maheswari Radhakrishnan, faculty member at the University. The company is also developing its AI expertise, and recently launched an AI sales assistant for its customer relationship management software.

At the end of a year, students are assigned to teams within Zoho for an internship based on their performance and interviews. Good performers are eventually hired. Today, 15% of Zoho’s 4,500-strong workforce is from Zoho University, with 30 of them in leadership positions.

“ZU [Zoho University] students bring practical experience, and other graduates are strong in theory,” Muthuselvi, a Zoho Projects employee and a Zoho University alumna, said in Tamil. “The training process at work is different but there isn’t a difference otherwise.” Muthuselvi manages a team of 100.

During the programme, students are paid a stipend of around Rs 8,000 a month, which increases periodically. Students who complete the 18-month course and spend another 2.5 years growing through the company ranks usually end up getting paid more than what alumni of other colleges get as freshers at Zoho, said Dandapani. The students are hired into two salary brackets – approximately Rs 4 lakh ($6,210) a year and Rs 6 lakh ($9,315) a year – based on their performance.

Not many top IT firms today hire non-engineers for programming, but the ones that do pay them nearly on par with engineers at the entry level, said Alka Dhingra, assistant general manager at TeamLease Services, a staffing firm.

Evolving through time
Over the years, the recruitment process at Zoho has become stringent. School exams aren’t a criterion, but the company expects students to show strong aptitude in logic, mathematics, and communication, and not just in one of the three.

However, even a decade after launch, Zoho University’s most difficult task remains convincing parents.

Most students hail from small towns, they are usually first generation learners in their families, and come from a socio-economic backgrounds where parents believe that conventional college degrees are the only way to success. “People still are confused about not going to college and getting into a software company without a degree,” Radhakrishnan said. Parents feel that their current poor status is due to their lack of education, she added. “They don’t want their children to suffer the same thing.”

For aspirational India, a facility like Zoho University is a stairway out of a troubled loop. For Zoho, it is gateway to a goldmine of potential talent. No wonder then that other leading tech firms, too, are now taking a similar path. For instance, from April this year, software firm HCL Technologies has begun preparing 200 high-school students for entry-level software engineering jobs. It could be a win-win deal for the Indian technology sector. #KhabarLive