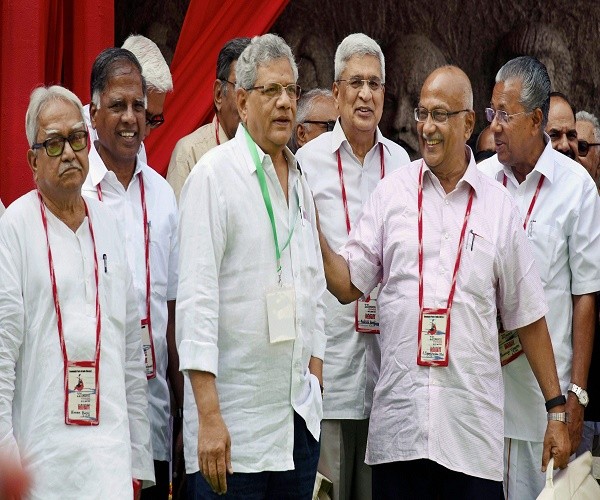 The Communist Party of India-Marxist began its 22nd Congress in Hyderabad with a call to mobilise secular and democratic forces to defeat the Bharatiya Janata Party (BJP) in elections.

Addressing the inaugural session, CPI-M General Secretary Sitaram Yechury said mobilizing secular and democratic forces was imperative to strengthen people’s struggle for the realization of an alternative policy direction for the country.

He exuded confidence that the party conclave will give will give a new direction to strengthen its independent activities, to intensify people’s struggles, to strengthen unity of Left forces and to boost the unity of the Left and democratic forces.

Setting the tone for the deliberations at the five-day meet, Yechury said that the BJP government at the Centre had imposed unprecedented miseries on the people and, at the same time, grievously threatened the unity and integrity of the social fabric.

“The dehumanization of our society is seen in the chilling incidents of rape in Kathua and Unnao. It is shameful to see rape being used as weapon for communal polarization. This must be resisted and defeated,” he said.

He said Muslims and Dalits were being targeted for murderous assaults in the name of cow protection.

“In the name of moral policing our youth are being told what to wear, what to eat, whom to befriend. Those not following such instructions are assaulted. These private armies are seeking to control our social order, under the patronage of RSS/BJP.”

Yechury identified four challenges which he said need to be confronted with urgency and reversed. He said the answer to these challenges was a policy alternative that can only be provided by the Left and democratic forces.

ALSO READ:  How The 'New Age Voters' Will Be Crucial In Deciding The 'Political Fortunes' In 2019?

He told the delegates gathered from across the country that the assault of neo-liberal economic policies had assumed unprecedented dimensions.

He claimed that the neo-liberal offensive had sharpened extreme inequalities. “In 2017, 1% of the richest Indians cornered 73% of the wealth generated in our country.”

He said the deepening agrarian distress was being resisted by peasantry all across the country. “The promise to our youth of creating two crore jobs every year has been reneged. On the contrary, even in the organised sector today, there is growing unemployment.”

He described demonetization and GST as the twin assaults which economically uprooted crores of our people dependent on the cash economy and decimated the small-scale industry which provides the largest employment opportunities outside of agriculture.

He alleged that in West Bengal the Left was a target of a reactionary and communal combine. He said the RSS and BJP were targeting the Left cadres with murderous assaults both in Tripura and Kerala.

TRS Supremo KCR Hopes To Getting In Power For Second Term...