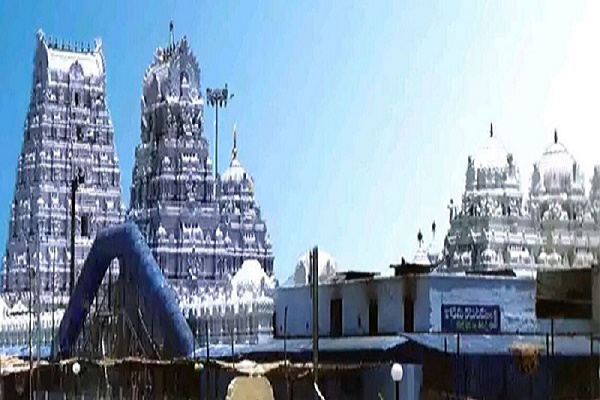 My mother, a literature-lover, often used to mention the poet Vemulawada Bheema Kavi. Later on my visits to Karimnagar, I heard from locals that Bheemakavi was not only respected as a poet but that his contemporaries credited him with healing powers and other attributes of a saint. Vemulawada is around 40 km from Karimnagar.

The town of Vemulawada from where this poet is said to have originated is more famous as the seat of the Sri Raja Rajeswara temple. It draws tens of thousands of pilgrims every year. The main deity here is Shiva in the form of a huge Shivalinga and his consort is the goddess Sri Raja Rajeswari. As with all Shiva temples, there is a shrine to Ganesha who is called Shri Lakshmi Ganapathi and a Nandi statue facing the Shivalingam.

The guide told us that rock-cut inscriptions discovered in this area are proof of the historicity of this Vemulawada which was the capital of the Vemulawada Chalukyas who ruled from around 750 AD to 973 AD. However, the name mentioned is Lemulawada.

There is a huge water tank called Dharmagundam in which people bathe before entering the temple to see the deity. Of course, not all pilgrims nowadays follow this procedure and neither did I. Actually, the waters here are credited with medicinal powers. Interestingly, the Shiva lingam here is a Neelalohitha Shivalingam and the temple is also known as Dakshina Kasi or Kasi of the south.

Also, it is an unusual Shiva temple where Vaishnavism also flourishes—there are two major shrines to Vishnu here. One is to Seetharamachandra and the second is to the deity Ananthapadmanabhaswamy. This is why the Vemulawada temple is known as Harihara Kshetram or a pilgrimage centre for Shaivites and Vaishnavites. Shivaratri is the biggest festival here though Sri Rama Navami also draws crowds of pilgrims.

The priests here also add that the since the Sun God aka Surya or Bhaskara prayed here to the deity Sri Rajarajeswara and was freed of his disability, the place is also known as Bhaskara Kshetram. Moreover, a dargah is also located here.

Barely a 20-minute drive from here is Sircilla, the famous textile town. It is home to thousands of weavers. The town hums to the sound of looms and the material produced here are picked up by wholesale merchants who come here to make purchases in bulk. Allied industries and factories like textile-processing and dyeing also abound here.

The town also draws tourists and students of textile technology as well as designers because of the huge Textile Park which has been set up here by the government. Specifically, it has been set up at Baddenapalli, which is around 6 km from the centre of Sircilla. The park houses an exhibition on the history of weaving and textile technology in this region which is highly informative. Here one can see the evolution of weaving and models of looms from the ancient handlooms to the current power looms.

There is a large and popular Anjaneya temple in the town which we visited. We were told that the Telangana government was proposing to create a mega textile zone in Sircilla and Warangal. The residents also told us that this area had produced great sons like writer and Jnanpeeth awardee Dr C Narayana Reddy and prominent politician and governor C Vidyasagar Rao.

Having completed a pilgrimage at Vemulawada and checking out textiles at Sircilla, you can drive out for an hour or a little more and visit the Gandhi Centenary Archaeological Museum at Karimnagar. This museum showcases nearly 1500 artefacts like cutlery items, weapons of various kinds, coins, stone implements, statuettes, fossils, Buddhist limestone panels and plenty of terracotta items. These were found in excavations conducted in and around Karimnagar. The areas mentioned in the museum include Kotilingalu, Peddabankur, Dhulikatta, etc.

In the central section, stone tools which are around 30 centuries old are on display. Coin lovers will enjoy visiting the big galleries with an exhibition of coins ranging from the Pre-Mauryan period to the British era. At the entrance, we were told not to miss the Anjaneya statue dating to the 12th century AD from Peddabankur and a rare statue of the Jain saint Parsvanatha Sallekhana posture from the 7th century AD discovered in excavations at Gangadhara. We also found many small and big idols related to Buddhism and Jainism as well as the arms and ammunition that had been used by the Hyderabad Nizams. There is bidriware too on display which was used by royals.

The museum has fossils of fish and trees said to be lakhs of years old! One finds both Neolithic tools like axes and grinding stones and items from the Satavahana period such as pottery, bricks, bangle pieces, terracotta mounds and iron pieces which offer insights into life during the Satavahana period. Also, from this period are Buddhist limestone panels revealing great attention to detail which were brought here from the Dhulikatta Buddhist stupa area. #Khabarlive

How The AIMIM Is Reaching To ‘Female Voters’ In Hyderabad With...