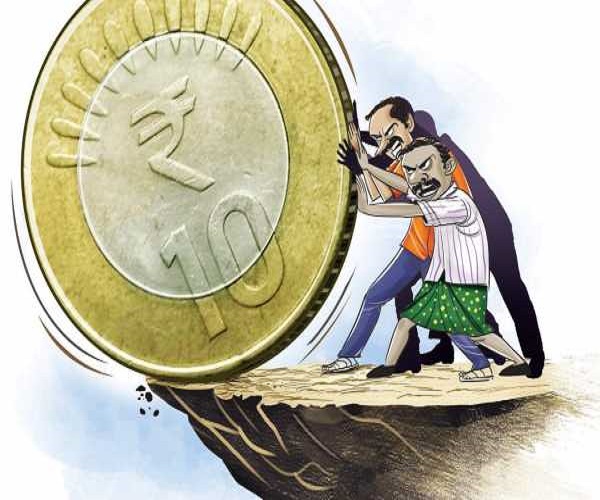 Even as Union Finance Minister Arun Jaitley clarified in the ongoing Parliament session that there was “no perceptible decline in the demand” for coins, many traders and commercial establishments in the capital region of Andhra Pradesh were not accepting `10 coin as a legal tender. With no other option left, the public is visiting banks to get the coins exchanged for notes.

Even though the Reserve Bank of India (RBI) had issued two circulars in the last three months and sent mass SMSes to the public clarifying that `10 coins were legal tender, the problem still continued, much to the chagrin of the commoners. “When I offered a `10 coin at a coffee shop in the Vijayawada railway station, it was not accepted. I met with similar experience at other commercial shops as well. Helplessly, I went to a bank and got the coins exchanged for notes,” said A Nishat, a senior citizen living at Seetarampuram in the city.

While senior bank officials said that complaints could be registered with the RBI in connection with the issue, the unavailability of contact number of the local RBI representatives was not helping the case.

“We are clueless as to whom to approach when we face such issues,” said Y Priyanka, a lecturer at a college in Tenali. A former member of the State Level Bankers’ Committee of Andhra Pradesh told TNIE that increasing the level of awareness was the only solution to put an end to the problem.

“There are legal provisions for the public to take recourse to, but it will not fetch any results. If any of the banks do not accept the coins, then we can register a complaint with the RBI. But if there has to be a change in the perception of traders, we need to have more awareness campaigns,” the official said, requesting anonymity. Last year, the Krishna district administration had announced a complaint cell for grievance redressal of issues relating to ` 10 coins. However, no inspection had been held in the recent past. #KhabarLive