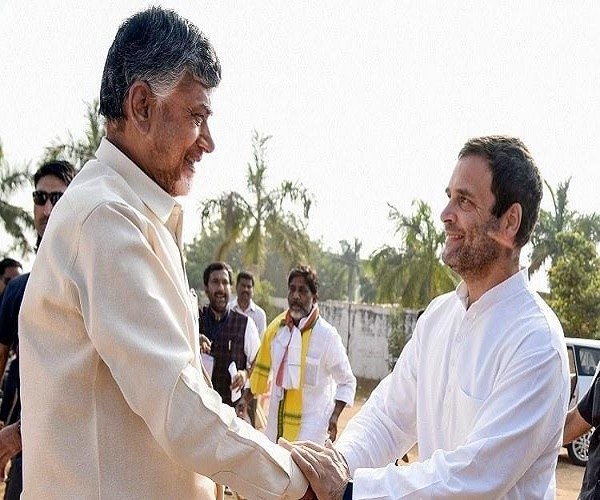 Andhra Pradesh Chief Minister N Chandrababu Naidu hit the Telangana campaign trail despite his Telangana counterpart K Chandrasekhar Rao’s diatribe, and shared the platform with Rahul Gandhi, the President of Congress, a party that was historically the TDP’s arch-rival.

KCR makes it difficult for Naidu to reconcile his position as the president of a regional party and Chief Minister of a neighbouring state, with which Telangana has many unresolved disputes as a legacy of bifurcation.

KCR invokes Telangana pride and frequently refers to the letters allegedly written by Naidu in the latter’s capacity as the Chief Minister of Andhra, raising objections to the irrigation projects in the state. He further described the Congress’ alliance with the TDP as selling the state’s interests to Amaravati, the capital of Andhra Pradesh post bifurcation.

Although Naidu gave a letter supporting the bifurcation of united Andhra Pradesh for political benefit, it is widely believed that he is opposed to the division of the state. In fact, he called June 2, the day Telangana state was formed, as a dark chapter, alleging arbitrary bifurcation.

The Telangana Rashtra Samiti, which KCR is the President of, is now capitalising on the popular belief that Naidu was against the formation of the new state.

“Chandrababu Naidu has 175 seats. Why should he encroach on Telangana politics?” said KCR. It is a tightrope walk for Naidu. His political rivals back in Andhra — the YSR Congress Party and actor-turned-politician Pawan Kalyan’s Jana Sena — decided not to contest in the Telangana elections. Any pro-Telangana comment would be counterproductive for Naidu in his state.

However, without going into the protracted differences between the two residuary states, Naidu, during his tour of Telangana, chose to focus more on what he claimed as his seminal contribution to the development of the state, especially the city of Hyderabad as the Information Technology destination, which even the TRS does not deny. Telangana IT minister and KCR’s son KT Rama Rao has in the past praised Naidu’s contribution in this direction.

Yet another precaution the Congress-led Prajakutami or People’s Front took as far as Naidu’s tour is concerned is that the TDP supremo largely confined himself to Hyderabad and Khammam, where a sizable population has a social and regional connect with Seemandhra, which is in present-day Andhra Pradesh.

The Congress, after a careful cost-benefit analysis, chose to ally with a party led by the Andhra Chief Minister. The sizeable presence of Seemandhra electorate in Telangana and the traditional political base for TDP prompted the Congress to sail with Naidu.

Though the TDP was crippled, most legislators who won on a TDP ticket in 2014 defected to the TRS thanks to the persistent politics of ‘Operation Akarsh’ (to poach leaders) and even became ministers in the KCR cabinet. However, the Congress leadership believes that the TDP still has something significant to add to favourable electoral arithmetic. Though the TDP won 15 seats in alliance with BJP in 2014, the party has been allotted only 13 seats in the Congress-led combine this time.

However, the perils of rising Telangana sentiment thanks to TRS onslaught still haunts the Congress, which hopes to make a comeback in the new state which it delivered, braving acute political cost in the other residuary state.

Ever since the efforts for a Congress-TDP alliance were underway, the TRS’ main campaign plank attacked the TDP and called it an Andhra party and N Chandrababu Naidu as the enemy of Telangana. The fear still lingers in the minds of Congress leaders on whether the tie-up with TDP shall backfire. Thus, Congress refuses to call it a Congress-TDP combine.

Instead, the party roped in smaller players like the Communist Party of India (CPI) and the Telangana Jana Samithi (TJS) led by Prof Kodandaram. In fact, making Kodandaram — the man who led the Telangana Joint Action Committee (TJAC) that spearheaded the movement for a separate state — the convenor of the People’s Front, the Congress tried to usher in the grand alliance as a sort of Telangana identity, despite the presence of the TDP. Even the popular Telangana balladeer, Gaddar, whose songs echoed during the Telangana movement, was roped in to support the grand alliance.

If this risky experiment succeeds, it would not only improve the revival prospects of Congress in Andhra Pradesh but also send a positive message beyond Telugu frontiers, which may even make other regional parties gravitate towards the grand old party.

In the past, the TDP has anchored efforts of united national opposition in the form of the National Front and the United Front, which has great chemistry with many other regional parties. N Chandrababu Naidu, who played a key role in the formation of United Front and the first NDA government led by Vajpayee, has personal chemistry with regional satraps across the country, most of whom are not yet ready to openly embrace the Congress as the leader of national level Mahagatbandhan.

Thus, the Congress sees in Naidu a friend who can be of immense use not just within the borders of Telugu states but across the country in the run-up to 2019, besides helping the party to revive itself in Andhra Pradesh.#KhabarLive #TelanganaElections2018