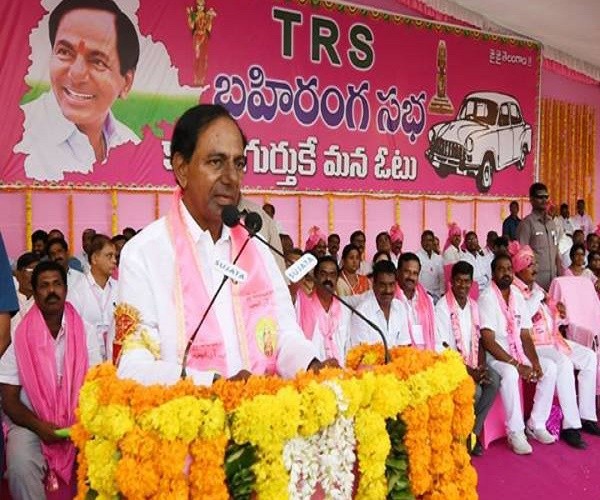 In series of public meetings following the dissolution of state assembly, the TRS president and the chief Minister of Telangana has been launching a virulent attack on the TDP president and Andhra Pradesh chief Minister N Chandrababu Naidu. This is despite KCR stating that the TDP does not even have a fraction of one percent vote .

The angry outbursts of KCR are not without a reason. There is a calculated electoral strategy to create a perception that the mandate in 2018 is between him and the Andhra chief Minister. KCR believes that such a perception if strengthened can rally Telangana voter in his favour as the sentiment is still afresh.

Amidst raising temperatures on the question of bifurcation that has thoroughly embarrassed Chandrababu Naidu , TDP won 15 seats on its own and stood second in another 20 seats in 2014. This performance was fairly impressive given the fact that the congress that delivered Telangana won in only 21 seats. The votes polled by TDP were higher than TRS majority in as many as 15 seats.

The TDP has been in a disarray in Telangana. Most of its legislators have defected to TRS . The party lost is leaders and cadres. Subsequent to the note for vote scam in which party supremo himself faces allegations of bribing a MLA to vote for the party in MLC elections, N Chandrababu Naidu has been relatively keeping away from party activities in Telangana. He is no longer aggressive in his criticism of TRS.

All this has certainly demoralised the party rank and file. Its voting has also been largely eroded evident from the party’s dismal performance in elections to Greater Hyderabad Municipal Corporation (GHMC ).

Now, the congress and TDP hope that their alliance will be a win-win partnership despite the fact that the TDP’s strength has dwindled since 2014 with large scale defections from the party to ruling TRS. This is because, TDP has a traditional base and is expecting a boost if it ties up with congress. the TDP Telangana leadership believes that party can recoup its strength as the alliance with congress gives the much needed confidence to the party cadres and leaders alike.

Thus, the Congress finds TDP as the most promising ally as it is desperately looking for additional vote to dislodge KCR regime.

Though the TRS publicly pooh poohed the Congress – TDP combine as a desperate bid by the opposition to stitch up an opportunistic alliance, the party is certainly not unconcerned of possible political implications of any such electoral arithmetic taking shape in the opposition camp. This is precisely the cause of concern for TRS supremo, KCR . Thus by mounting his attack on Chandrababu Naidu by invoking the Telangana sentiment , KCR intends to make TDP a liability for the congress.

In fact, the post bifurcation period has seen bonhomie between the two telugu chief ministers . KCR joined the celebrations in Amaravati, when the Prime Minister unveiled the new capital of Andhra Pradesh. Not just sharing such a cordiality, KCR described Naidu as his best friend when asked about roping in Naidu into his proposed federal front of non Congress , non BJP parties.

The TRS has extended support to the demand of Andhra Pradesh for special status. All this was seen as a strategy to woo the Seemandhra electorate who form a decisive vote base in several constituencies in Telangana. However, the bonhomie turned into hostility as TDP moved towards Congress to challenge KCR.

The movement for separate state of Telangana was primarily against the domination of Andhra political leadership. The two telugu states still have many unresolved issues like sharing of Krishna , Godavari waters, dividing the joint properties etc.

Being the chief Minister of Andhra Pradesh , Chandrababu Naidu has obviously defended the interests of his state. Andhra Pradesh government raised objections to the prestigious Kaleshwaram and Palamuru -Ranga Reddy Lift irrigation schemes in Telangana . The High court is still undivided. There is a wide spread perception that Chandrababu Naidu is responsible for the undue delay in bifurcation of judiciary.

The wounds of bifurcation are still afresh. Precisely, the TRS and KCR want to incite this Telangana identity to question Chandrababu Naidu led TDP. Thus, KCR wants to frustrate the attempts of congress to mount a joint opposition fight against the TRS in the ensuing Assembly elections. #KhabarLive

Aadhaar Allows The State To Dominate Citizens Via Architecture Of Surveillance