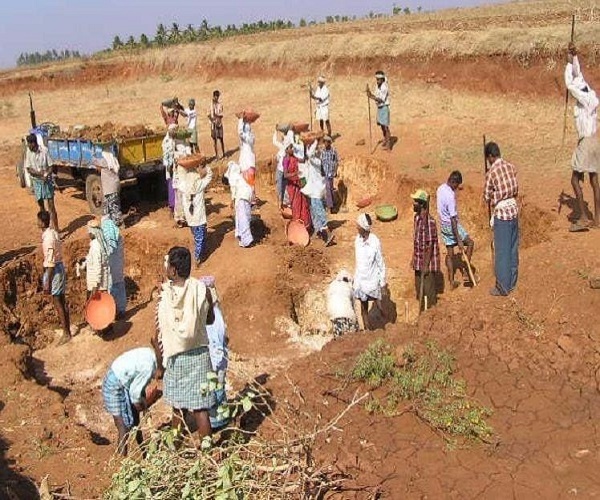 Political parties paid MGNREGA workers and Field Assistants Rs 200 to Rs 250 per day, in addition to food and liquor, for accompanying the candidates for their door-to-door election campaigns.

Amesh, a marginal farmer from Jogulamba Gadwal district, was unable to find work through the Mahatma Gandhi National Rural Employment Guarantee Scheme (MGNREGA) this November. But, he found work as a ‘campaigner for hire’ for political parties contesting in Telangana elections. He was paid Rs 200 to Rs 250 per day by different political parties, in addition to free lunch, dinner and some liquor in the evening.

“We haven’t gotten any job since November because of the Model Code of Conduct (MCC), and as an alternative, we started taking part in political campaigns. The political leaders pay us Rs 200-250 each day,” said Amesh to #KhabarLive. However, what Amesh does not know is that all ongoing schemes such as the rural employment scheme also called the National Rural Employment Guarantee Act (NREGA) scheme, do not get affected by the MCC that came into effect in September.

Those who work closely with workers observed that such misinformation was being spread by Field Assistants (FAs) responsible for executing the MGNREGA scheme. The Field Assistants themselves were busy campaigning for political parties. Under the scheme, the FAs are in charge of selecting the work, such as digging irrigation canals and clearing farmland of rocks, based on priority and demand.

Political parties were paying NREGA workers and FAs as much as Rs 200 to Rs 250 per person per day, with food and liquor, for accompanying the candidates for their door-to-door election campaigns. Thus, the work done under the scheme had dipped for November and is expected to dip in December as well, with the Gram Panchayat elections just around the corner.

The absentee FAs
“The FAs are responsible for NREGA implementation. If this person is removed from the system the scheme comes to a halt. But the FAs were busy campaigning. The political parties are using the FAs and the hold they have over the NREGA workers and using this for political advantage,” said Chakradhar Buddha, a programme manager with Libtech India, a group of engineers, social workers and social scientists working with tribals in Telangana.

With FAs busy campaigning for political parties, no work gets allocated even if there is a demand for work; and the Panchayath Raj overseeing the scheme will record the dip in work as low demand.

Bhaskar T, from Thummalacheruvu village Jogulamba Gadwal district working as a data collector for ‘Upadhi Hamee Phone Radio’ by the Libtech India told #KhabarLive, “Ever since the election code came into place, the NREGA workers would go for campaigns as they would get paid. For campaigns, they get Rs 200 per day, afternoon lunch and dinner, plus alcohol at night.”

Bhaskar estimates the work under the scheme to have dropped across the Jogulamba mandal by 65% to 75%.

The trend of a drop in NREGA work have been observed at Warangal, Jagtial and Mahbubnagar districts but the pattern of FAs being roped in for election campaigning could be a statewide phenomenon.

“The workers stopped the NREGA work because they were taking part in campaigning, got paid each day and were also provided with food. The NREGA payments, on the other hand, come only after 30 days. The people are going to the political rallies by themselves and not because the FAs are telling them to,” Bhakar clarified.

Both Bhaskar and Chakradhar pointed out that senior citizens, women and people with disabilities, who are NREGA workers, don’t get called for campaigning (and thus employed) with political parties as the campaign work involves walking and wandering from morning to evening.

Politics in NREGA a worry
Chakradhar expressed his concern over the “never seen before” trend of FAs actively working for political parties. He fears that over time, politicians could have a say in the appointments of FAs for the NREGA scheme.

Growing popularity in rural Telangana
Officials with the Panchayath Raj department pointed out that generally there is a low demand for NREGA work in November as there are plenty of alternate sources of employment available. The officials told #KhabarLive that workers during the months of November and December mostly find work as chilli and cotton pickers, thus providing them with an alternate source of income. The workers prefer not to use their 100 days of work assured by the scheme and would rather use it during the non-farming seasons, which is mostly between February and March.

“The NREGA scheme is a demand-based scheme, if there is a demand, we will provide work. This year, from May to April, over 15 lakh workers availed of the scheme but now not even 20,000 to 30,000 people use the scheme from July to December. Even if a worker demands job in any gram panchayat, it is our responsibility to provide the worker with employment,” the official said.

The scheme, however, is popular in rural Telangana. It has already used up its allocated Rs 20 crore by March this year. Due to growing demand, another Rs 3 crore was sanctioned. “We can cater to the demand for the scheme as funds are being sanctioned duly from the Centre ever since the Supreme Court got involved,” said the official, adding, “Until 2017, if the funds for NREGA were exhausted, the Centre would never allocate additional funds. The Supreme Court later intervened and pulled up the Centre for not releasing funds.” #KhabarLive