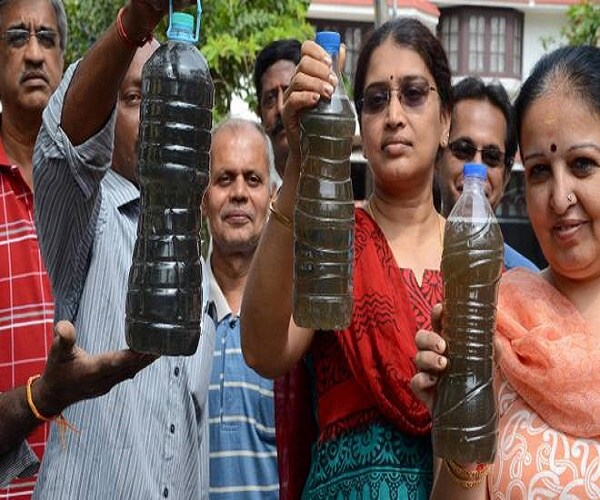 In Hyderabad, past several weeks if the water in taps appears dirty or muddy with particles floating in it and there has been no improvement despite complaints, then the Hyderabad Metropolitan Water Supply and Sewerage Board (HMWSSB) knows who to blame – the monsoon.

While some officials say the reason the city is experiencing poor water quality is due to the reservoir water turning muddy, those in charge of water quality and testing say, “Hyderabad’s drinking water is fine”.

At Yousuf Colony at Moula Ka Chilla in Yakutpura, where drinking water comes once in three days, the 30-odd houses find the water unfit for consumption. “The water is muddy and has dust particles, it’s not possible to use this water for drinking, cooking or even washing clothes. We have raised a complaint with them and they even assigned an officer to resolve the issue, but till date nothing has changed,” said Mubeen, a resident of the locality.

At localities where the water is supplied once in two or three days, the water is usually stored in buckets and large containers. The residents are unable to even store the water being supplied as it begins to show worms. This despite officials claiming that all water supplied to the city is chlorinated.

Another resident of the locality reached out to HMWSSB via Twitter to raise an official complaint on October 6 and a service request also was generated.

Speaking to #KhabarLive, a senior official with the quality department of the HMWSSB, said, “Even at my home the water is turbid. This is due to the monsoon, the water is muddy because the water in the reservoirs is muddy due to the recent heavy rains but the bacterial presence will be within the permissible limit. People just have to filter and boil the water before drinking.”

However, J Sunil Kumar, the General Manager for the Quality Assurance and Testing Wing with HMWSSB, refused to acknowledge that the water being provided to the city is coloured and has mud particles, saying, “Not at all possible, there have been no complaints about the water quality.” When pointed out that a complaint was filed on October 6, the official responded by saying, “Not at all, we haven’t gotten any complaints. Perhaps last month there were but not anymore.”

When pointed out that other officials are blaming the monsoon for the poor water quality, the official replied, “There must be some drainage inflow, our quality is good.”

The best solution being offered by the HMWSSB to prevent denizens from contracting water-borne diseases such as diarrhoea, gastroenteritis, amoebiasis is to “drink the water only after filtering and boiling it”.

District Health Medical Officer (DHMO) for Hyderabad Vijay Kumar told #KhabarLive that they haven’t observed any spike in the number of water-borne diseases in the city.

However, in August #KhabarLive stated that the Integrated Disease Surveillance Programme (IDSP) under the Ministry of Health and Family Welfare reported that for the months of June and July alone the city witnessed 1,301 enteric fever cases and over 16,178 cases of diarrhoea, including gastroenteritis.

Speaking to #KhabarLive, the spokesperson for Padmavathi Gastro and Liver Hospital at Miyapur said, “In a day, on average about 10 people walk into the casualty for gastroenteritis. In the past three weeks we have seen the number fluctuate between 10 and 15.”

Dr C Navyatha with Mankindd Hospital at Himayath Nagar while saying that it’s a must to boil water before drinking, also advised the public to avoid food prepared with contaminated water. “There is a spike in the cases of water-borne diseases, but it’s not just because of the drinking water being supplied. Even after boiling water if someone falls sick, then the source of the disease is from elsewhere. It has to do with lifestyle changes as people increasingly consume food from outside or it could be genetics,” the doctor said. #KhabarLive

Every Sunday ‘Abids Book Bazaar’ On Footpath Is A ‘Big Hit’...

Will KTR Be The Next CM From Ugadi In Telangana?