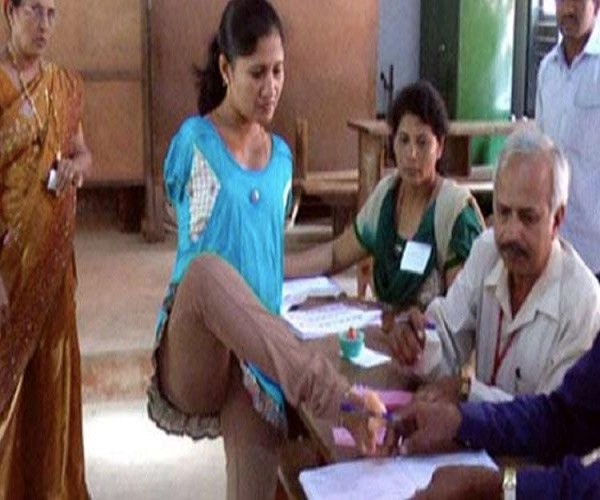 As Telangana prepares to vote in December, activists are criticising a lack of effort by the Election Commission to add all Persons with Disabilities (PwDs) to the electoral rolls.

Despite the EC’s pledge of ‘No vote to be left behind,’ only those who have a disability certificate and are availing a disability pension will be included on the electoral rolls. Without those requirements, disabled persons will have to register on their own.

The Telangana assembly was dissolved on September 6 and will go to polls on December 7. PwDs fall under the 21 different types of disabilities, and one of the key points of the Strategic Framework on Accessible Elections was to increase disabled persons voter registration thorough mapping PwDs around the polling stations. The ECI set a deadline of October 11 for the state EC to report back on their progress, after releasing instructions to appoint coordinators for the inclusion of PwDs in late September.

But with time running out and a lack of new surveys needed to create an updated database, the state EC is relying on disability pension data to add PwDs to the electoral rolls, instead of getting an accurate number of Persons with Disabilities. The EC will publish the electoral rolls on October 12.

ALSO READ:  Why BJP Repeatedly Say ‘Beti Bachao’ And Then Do ‘Balatkari Bachao’ – Again And Again?

“This is wrong, but it’s already too late,” said Srinivasulu, the president of Network of Persons with Disability Organisations (NPDO), an umbrella organisation for those working for disability rights in the country.

According to Srinivasulu, at the meeting with the EC, he learnt that election arrangements are being made for only a few types of disabilities.

The missing PwDs
The ECI had aimed to build a database on PwDs based on their polling stations, listing the type of disability to ensure complete enrollment in the electoral rolls. Block Level Officers (BLOs) were to carry out the task, but the work has not yet commenced in Telangana.

Currently, no department in Telangana has a complete database on how many PwDs reside in the state.

“There is no data with anyone as the surveys have not been done, they will begin only next year,” said a senior official on the condition of anonymity. “There are many without disabled certificates, their numbers will be higher. This new category doesn’t have disability certificates as the government is yet to give them.”

Certificate Holders Only
In Telangana, the total number of PwDs availing aasara pensions is 9.12 lakh persons, according to the Telangana socio-economic outlook 2017. But after weeding out minors who are availing pensions, that number has come down to a little over four lakh persons eligible to vote this year, said Srinivasulu.

“The four lakh-person figure was given to us by the state EC,” he said. “But the actual figures on the number of PwDs eligible for voting will be higher.” The figure cited by Srinivasulu was also confirmed by officials from the Women and Child Welfare Department.

After the Telangana assembly was dissolved on September 6, NPDO checked the electoral registration status of PwDs in Nalgona, Mahbubnagar, Ranga Reddy, Hyderabad, Adilabad, Wanaparthy and Karimnagar districts. They claim to have found that many PwDs have not being enrolled.

A long road for EC
The EC for its part is holding awareness campaigns, providing braille enabled voter machines, training sessions in sign languages for election officials and even providing transport facilities for voters with locomotor disabilities.

Still, the ground challenges faced by EC are numerous, activists say. This includes the difficulty to make private schools agree to build ramps for PwDs during the elections.

“The instructions given out by the ECI are really good but when it comes to implementation at the ground level, there seem to be many glitches such as booth level officers (BLOs) being overburdened thus having difficulty to carry out the PwD mapping work, or lack of knowledge among enrollment officers about enrolling persons with intellectual and psycho-social disabilities, or inadequate information about access standards to be met at polling booths,” said Smitha Sadasivan, member of Disability Rights Alliance, who is also an election consultant for the ECI.

The Telangana Election Commission did not respond to request for comment. And no voices raised for this genuine need, yet. #KhabarLive