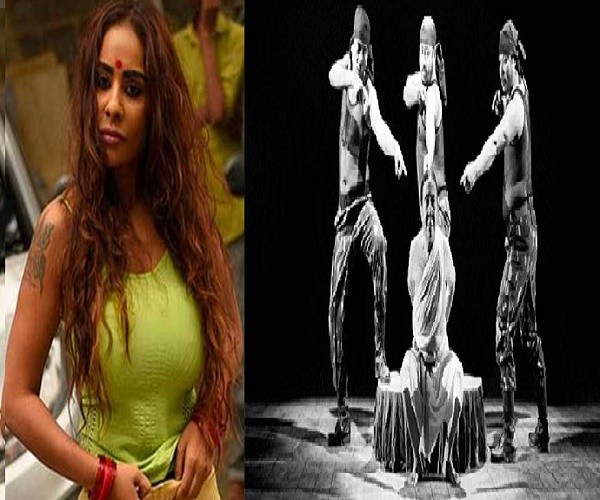 What can be done to women and girls in private can’t be on public display. In Mahasweta Devi’s brilliant short story Draupadi, a Santhal woman is captured and repeatedly raped in custody. The story ends with her tearing away the clothes given to her after the violation stops. As she runs, naked and bleeding, into the arms of the highest-ranking security officer, he feels fear for the first time in his life.

The collective “haw” or shaming reaction from society is customary when a woman strips publicly. Women strip publicly to protest patriarchy’s rules and in patriarchy, a woman’s virtue is her most important asset. That is why public stripping by a woman is subversive. An act of rebellion against an established system.

Telugu actor Sri Reddy stripped on the streets of Hyderabad to protest against the casting couch in the film industry. Police removed her from the spot for “creating a nuisance”. We heard that the entire film industry “is shocked”. A day later, Sri Reddy was also asked to vacate her house, presumably for her lack of feminine grace, propriety and virtue.

In Hollywood, Harvey Weinstein’s sordid and cruel behaviour changed the gender discourse, unleashing the powerful #MeToo movement against the casting couch and sexual harassment. Sri Reddy may be unable to shake the earth in this docile society called India but, rest assured, she is much more than a nuisance.

Manipuri women jolted the nation in 2004 when they stripped publicly to protest against rape and torture of Manorama by Assam Rifles security personnel. The public exposure highlighted what women go through when laws like Armed Forces Special Protection Act or AFSPA protect men in uniform from facing action or imprisonment for violence against women.

A woman’s body is often a political tool in communal violence as one community tries to establish superiority over another. Bestseller writer Sujata Gidla informs us that Dalit women don’t wear bright colours for the fear of attracting the wrong kind of attention. She also points out the disharmony in that many upper-caste men consider that a Dalit’s touch will pollute them but have no qualms in sexually abusing a Dalit woman.

Present-day Jammu and Kashmir is grappling with the horror an 8-year-old girl was put through — Asifa, from a nomadic community, was sedated, raped and held in a temple.

Why then the objection to public stripping? Because a woman stripping in full view is using her body as a weapon, challenging the established order in feeling and displaying a lack of public shame associated with her now-naked body.

Padma Vibhushan and Magsaysay award-winner Mahasweta Devi’s grim fiction anticipates the male reaction to Santhal woman Draupadi tearing away the clothes that are given to her to wear after an all-night custodial rape. The reaction of extreme fear.

What can be done to women and girls in private can’t be on public display.

The staging of Draupadi by the department of English at the Central University of Haryana in Mahendragarh created a furore as recently as 2016, with a protest going on for days. University spaces are meant to disturb and challenge, and question. The ABVP, though, had a different view. It roped in local army men in the protest and labelled the short story anti-national. When all it is is subversive.

ALSO READ:  Are You Aware About 'Bottled Water Riddled With Microplastics', A New Research Reveal

Sri Reddy summed up her protest for a city edition of the Times of India: “This is the only way I can get them to listen to me. I have had to strip myself nude in front of several people in the film industry who promised work. Yet, I get no roles. I have been shouting from the rooftops about the injustice that has been meted out to me and to several other women in the film industry and yet I have not got any response from the Movie Artistes’ Association. So I have decided to strip publicly.” #KhabarLive

Why This Telangana Govt School ‘Begging Funds’ To Set Up A...