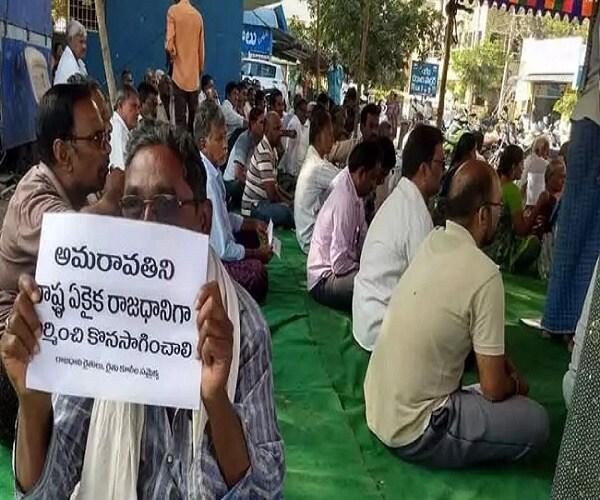 The anger of residents, farmers, politicians losing steam on agitation mood to gain Amaravati as capital of Andhra Pradesh. Almost all politicians are getting tired with a single slogan ‘Anmaravati Bachao’. Politics are getting murkier with the losing interest of big leaders.

The agitation by the farmers of Amaravati, in protest against the YSR Congress party government’s decision to form three capitals for the state with administrative capital being shifted to Visakhapatnam, entered 65th day.

Though a large number of men and women are still turning up in big numbers at the tents in different villages and are holding placards, raising slogans and occasionally taking out rallies here and there demanding that the capital be retained at Amaravati, the agitation overall appears to have lost its steam.

Whether it could be due to political pressures or high court orders, the police, too, have stopped acting tough against the agitators except when chief minister Y S Jagan Mohan Reddy passes through some villages to reach the state secretariat.

The initial euphoria displayed by the farmers in the form of holding Vanta Varpoo on the streets, highway blockades and non-cooperation movement, seems to have died down now.

The Amaravati Joint Action Committee, which used to be very active initially, appears to have run out of ideas.

Telugu Desam Party president and former chief minister N Chandrababu Naidu, who took Amaravati by storm in the initial days of the agitation, by attending meetings, addressing rallies and resorting to begging on streets, has gone silent. Occasionally, his party leaders like Devineni Uma and others are visiting the agitation camps.

Even the drama of power star Pawan Kalyan has come to an end and the Bharatiya Janata Party leaders have confined themselves to statements, after getting a dressing down from their national leadership.

The reason for this subdued atmosphere in Amaravati is very simple: the YSRC government led by Y S Jagan Mohan Reddy has just ignored the agitation in Amaravati and gone ahead with his plans in a systematic manner in creating three capitals.

The two crucial bills – one abolishing AP Capital Region Development Authority and the other, creating three capitals for decentralised administration – were passed by the state assembly.

The TDP tried to stall them in the legislative council by getting them referred to the select committees, but the ruling party acted quickly to foil their plan.

Now, the select committee formation is unlikely to happen, as the legislative council itself is getting abolished. It is only a matter of time that the bills become acts.

The farmers have realised that their agitation is like blowing a conch before a deaf ear. So, they are banking on the legal course and some of them have moved the high court. In the meantime, they will continue to sustain the movement on a lower scale, at least. #KhabarLive

How A ‘Dalit’ Academic And Activist Became The Target Of A...

‘It’s Time To Move Forward And Get United For Telugu States...