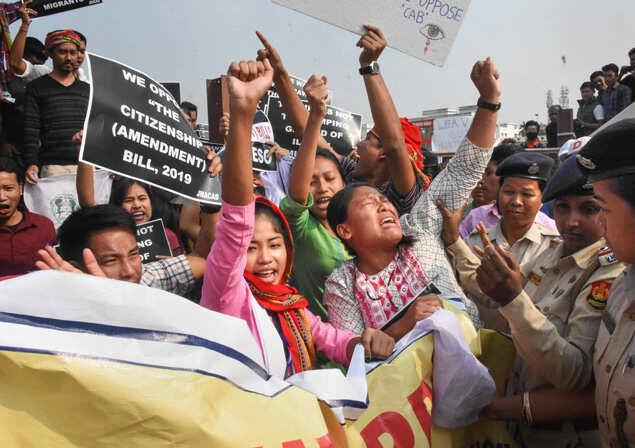 Till date, the private communication through the WhatsApp group “Flash protest Hyderabad” and similar WhatsApp groups mobilising protests against the combined impact of the Citizenship (Amendment) Act (CAA), National Population Register (NPR) and the National Register of Citizens (NRC) processes, have been stopped. The group admins of these WhatsApp groups fear their communication over the messaging app is unsafe and have collectively migrated to an app they feel offers better privacy.

“We wanted to filter out some people due to security reasons,” said Fahad one of the organisers, when asked if they fear police informers. “There has been an information leakage. We inform the group just 15 minutes before where the flash protest will happen but a couple of times the police were already at the protest venue waiting for us. We are not sure who is leaking but are taking measures and just being careful.”

In Hyderabad, protesting against the CAA-NPR-NRC has become a cat and mouse game between the protest organisers and the Hyderabad city police, and at the moment, the protestors seem to be ahead of the cops. “Those who got detained at Tolichowki protest on January 12 were quizzed by the cops to reveal who were the organisers,” says Imran* another protest organiser. None of these protest organisers belong to any political party, nor are they affiliated to any associations. “We are just a group of like-minded people not tied to any movement. We are just regular people with no previous links to any activism,” he adds.

Most of the organisers met over social media and decided to fight against the CAA-NPR-NRC together, “We are common people, we all met through social media and started independently. We are out of the police radar as we don’t belong to any organisation nor are we in politics, the activists are the face but organising is being done by us. Organising is not against the law,” he says.

When the first flash protest against the BJP government’s policies was launched on December 23 at Gachibowli, there were barely 10 people at this protest, says Imran. The organisers reveal the time and location with barely 15 minutes to half an hour for a protester to make it to the venue. The group has organised flash protests every day since then.

The flash protest organisers, however, showed up on the police radar on January 12 when one of their flash protests at Tolichowki attracted a crowd of about 100 to 200 women. Many of these women were roped in through non-profits that work for women’s welfare and with the help of city-based women activists. The protests began sometime around 9 pm and went on till the next morning at 4 am. By then their numbers swelled to over 500 before police began attempts to disperse the crowd.

“We planned the protest just for women, but suddenly messages went to other groups and the public showed up. We were expecting a maximum of 200 people but over 500 showed up,” says Imran, who adds the activists had approached the police twice seeking permission to protest but their requests were denied on both accounts. “So, we went ahead anyway,” he adds.

It’s being alleged by the police that the flash protest at Tolichowki led to a police constable being seriously injured due to stone-pelting. Shiba Minai, a journalist and activist, was booked along with another activist Khalida Parveen for organising the January 12 protest.

Shiba tells #KhabarLive that she was asked to visit the Golconda police station to receive a notice from the police but was instead placed under arrest. “It’s only after reaching there I was told that a police constable was grievously injured in the protests and that I am being made responsible for it. It was already evening by then and even if they can’t arrest a woman at night they still took me with them saying it’s for a medical check-up. They kept me at a woman police station till January 14 early morning. There are a lot of ways indirect harassment can happen to protesters,” she alleges.

Shiba was allegedly made to write on a piece of paper that she would not take part in any more protests against the CAA hereafter. The activist intends to protest again, “It’s my constitutional right to protest. Our fight is not with the police, it’s with the Central government’s policies,” she adds.

The police have also allegedly taken similar written statements from other protesters who were detained.

Imran alleges the police are now seeking information on the organisers behind the protests. “It’s not normal. The cops say we are violating the law and when we ask them which law, the cops say the government is not giving permission to protest. The cops had put the case on a couple of activists who helped organise the women protest and are holding them responsible, calling them as the main protesters. The state government doesn’t want these protests as there is a municipal election coming. The state government appears to be neither for nor against CAA-NPR-NRC. They just don’t want protests,” he alleges. The TRS government had voted against CAA in both Houses of Parliament.

After the Tolichowki protests, the surrounding areas, such as Mehdipattanam, were cordoned off by the police on January 14 to prevent further protests from breaking out. Fahad alleges, “There is a lot of pressure from the police. Some other people flash protested at Chaderghat on January 14 and got detained.” However, the flash protest organisers did not organise that particular protest.

“The organisers behind the Million March are also now adopting the flash protest strategy, they are not in touch with us but they are borrowing the idea, which is good. They are a group of 40 organisations and plan to protest every day as they are also unable to get police permission. Their leaders have been kept under house arrest,” says Fahad, who adds that the flash protest organisers want the protests against CAA-NPR-NRC to be a people’s movement and not just by a few associations and political parties. #KhabarLive