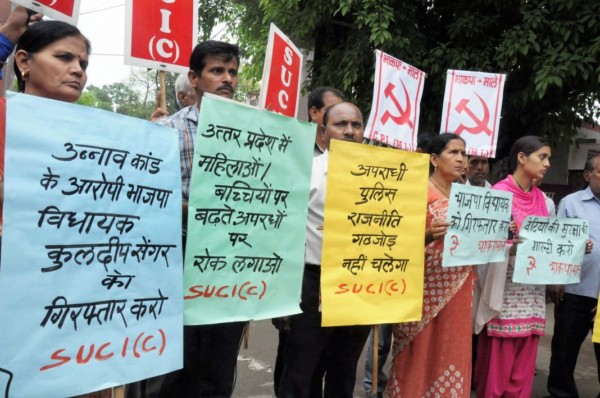 Remember, this is UP, where CM Adityanath says criminals will be shot dead in fake encounters without a trial — but he decides that he and other BJP leaders can be declared innocent without a trial.

This phrase is misleading. What we should be saying is, “Don’t defend rape and those accused of rape on political or communal grounds.”

Accountability and justice for rape must, of course, be a political issue — we must hold political parties and governments accountable for rape and rape culture, as we held the Congress governments at the Centre and in Delhi responsible for their handling of the 2012 Nirbhaya gang rape and murder.

Protecting daughters, or protecting rapists?
The question we should be asking today is: Why does the BJP say ‘Beti Bachao’ and then do ‘Balatkari Bachao’, over and over again?

We saw it when BJP MP Subramanian Swamy defended Asaram, accused under the Prevention of Child Sexual Offences Act of aggravated sexual assault of a minor girl, and deliberately distorted facts in his tweets.

We saw it when the BJP government let rape-convict Ram Rahim’s supporters run amok, and the BJP’s Unnao MP Sakshi Maharaj said, “Crores of people are supporting Ram Rahim, and only one person is complaining against him. Is one person right or are crores of people right?”

And we’re seeing it now, when the BJP’s MLA Kuldeep Singh Sengar, accused with his brother and others of gang-raping a teenager, is not arrested — but the victim’s father is arrested in a false case and beaten to death by the MLA’s brother. The teenager is forced to attempt suicide outside the CM’s residence — but the CM continues to meet a smiling Sengar, who calls the teenager and her father ‘lowly people’ .

Remember, this is UP, where CM Adityanath says criminals will be shot dead in fake encounters without a trial — but he decides that he and other BJP leaders can be declared innocent without a trial. He has not only not had Sengar arrested and withdrawn the various criminal cases against himself, he has withdrawn a case of rape against former union minister ‘Swami’ Chinmayanand, who was accused of raping a woman in his ashram.

Little Asifa needs our anger
The most soul-searing case of them all is, of course, in Kathua, where a special police officer, a former revenue official and other men are accused of kidnapping, drugging, torturing, repeatedly gang-raping, strangulating and smashing the head of eight-year-old Asifa in a temple, accompanied with rituals. The police initially destroyed evidence — but the case was handed over to the crime branch. The crime branch says the motive of this crime was to spread terror in the nomadic Bakerwal community to which Ashifa belonged, and claims to have DNA and other evidence as the basis for its arrests. The J&K high court is monitoring the investigation in the case.

But in Jammu, there is a concerted attempt to hide the horror of the rape in a communal fog, where people are being urged to stand with the victim or the accused, depending on their community and political affiliation. They do not want us, irrespective of our faith, to feel empathy for and anger on behalf of little Asifa.

The defence of the accused should be a matter for courts (yes, even those accused of the most heinous rapes and murders deserve to have competent lawyers and defend themselves in court; online comments on newspaper reports calling for summary execution of the accused in this or other cases are pointless, unjust, and simply not helpful for gender justice). But in Kathua and Jammu today, there is an attempt to turn the defence of the accused into a matter of community honour and even ‘national’ honour. How is this being done?

BJP ministers of J&K led ‘Hindu Ekta Manch’ rallies waving the Indian tricolour to defend the accused, insisting that the crime branch was biased and a tool of the Muslim chief minister. Women of the accused men’s families and community are rallying to demand a CBI enquiry, saying the police have only arrested “our people” (Hindus) and none of “their people” (Muslims) and “only the CBI will give us justice”.

The Kathua and Jammu bar association are also agitating in defence of the accused and even threatening the woman lawyer representing the victim.

Just pause and think about the meaning of such mobilisation.

When Jyoti Singh was raped and murdered in Delhi in 2012, the whole country rallied for her — without, at the time, knowing her name or caste or community. Modi, then the Gujarat CM, called her “Bharat ki beti” – India’s daughter.

Today, what stops Modi from speaking about Asifa? In his eyes, is Asifa not “Bharat Ki Beti”? And if so, why not?

When the ‘Hindu Ekta Manch’ rallies for those accused of the rape and murder of Asifa, they are saying that ‘Hindu unity’ must mean unity even with cruel rapists and murderers, and that such unity is more important than unity across communities against rape. They want Hindus of Jammu and Hindus of India to see Asifa, not as a victim needing our solidarity, our anger, and our thirst for justice, but as a Muslim, as someone of “their” community; and they want the accused of this heinous crime to be seen as those of “our” community, who must be defended only because they are Hindu. Every Hindu needs to ask themselves: Is this what being Hindu means to you — defending even rapist murderous scum just because they’re Hindu and their victim, Muslim? Should we be dividing child victims of rape, torture, and murder into “us” and “them”? Should we divide rapists into “ours” and “theirs”?

When anyone tries to defend those accused of such a crime, based not on any credible evidence or arguments but “Jammu sentiments”, “Hindu sentiments/Hindu unity”, or “national sentiments” (using the national flag), it means they are trying to make people accused of rape and murder the poster boys of Jammu, of the Hindu faith, of the nation. Is that really OK? The identity of the rape accused should not be used to malign any community or country but if they are defended as community or country heroes, that does, in fact, tarnish the community’s and country’s image.

If anyone feels the wrong people have been arrested for the crime, they can collect evidence and help the accused build a case for their defence in court. But the Kathua and Jammu bar associations, instead of using legal means to present evidence in defence of the accused in the high court, are calling bandhs, blocking chargesheets, and even threatening Deepika Rajawat, the woman lawyer representing Asifa’s parents.

Modi spoke on the Jyoti Singh rape and murder because, then, it was politically convenient to use the rape to target the Congress; he is silent on Asifa because it is politically inconvenient to risk offending the ‘Hindu Ekta Manch’, which is so closely associated with his own party; he is silent on Unnao because his own party’s MLA is accused. We didn’t tolerate silence from the Prime Minister in December 2012 — why should we tolerate silence from the Prime Minister now? #KhabarLive