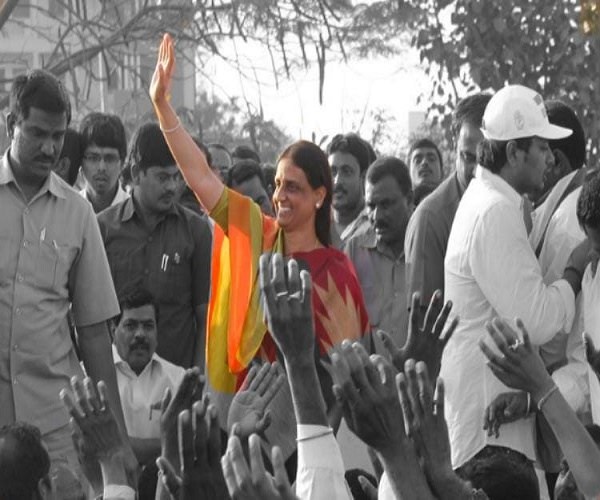 A hotly-contested fight is underway between the ruling Telangana Rashtra Samithi (TRS) and the opposition Congress party in Telangana over the Chevella Lok Sabha seat. Now, almost all the political parties taken as a prestige issue to win this seat. Hence it becomes the ‘hot cake’ in political circles.

The last one week has seen a series of events unfold as both the TRS and Congress have reportedly been trying to lure Maheshwaram MLA Sabitha Indra Reddy, who was the former Home Minister of united Andhra Pradesh under the tenure of Chief Minister Y S Rajasekhara Reddy, and her son Karthik Reddy.

In the 2014 general elections, the TRS had fielded Konda Vishweshwar Reddy. An engineer-turned-entrepreneur, Vishweshwar Reddy is one of the richest politicians in the state and as per his affidavit filed in 2014, his total net assets including his spouse and three dependents that he had declared amounted to Rs 528,06,05,210.

Riding on the Telangana sentiment, Vishweshwar got 4,35,077 votes and had managed to defeat Karthik Reddy from the Congress, who received 3,62,054. However, Vishweshwar has since quit the TRS and turned into a critic of Chief Minister K Chandrasekhar Rao. He had joined the Congress after meeting with Rahul Gandhi in Delhi last year, on the assurance that he would be renominated from the same constituency.

This has not left Sabitha and her son too pleased, as Karthik was eyeing the Chevella MP ticket.

Chevella is a crucial constituency in the state as it includes the Legislative Assembly constituencies of Serilingampally and Rajendranagar where the entire IT sector of Hyderabad and the Rajiv Gandhi International Airport (RGIA) are based and rural constituencies like Pargi and Tandur. Konda Vishweshwar Reddy is the grandson of former Andhra Deputy CM Konda Venkata Rangareddy. The district of Ranga Reddy, formerly known as Hyderabad Rural, was renamed after the late leader.

The TRS is viewing this as a prestige issue as Vishweshwar was close to KCR and his exit from the party had left many upset. Keeping this in mind, the party was reportedly looking to rope in both Sabitha and her son.

Sources said that Karthik approached Hyderabad MP and All India Majlis-e-Ittehadul Muslimeen (AIMIM) chief Asaduddin Owaisi, who set up a meeting between Sabitha and TRS Working President K T Rama Rao. The negotiation was reportedly for the Chevella MP ticket for Karthik and an assurance to induct Sabitha into the cabinet during the next expansion. However, Sabitha was quick to deny that the meeting took place and said that she would inform the media first if a decision was taken in this regard.

Meanwhile, the Congress is not going down without a fight as it deputed Working President Revanth Reddy to speak to Sabitha and convince her to stay back in the party. Both Revanth and Sabitha are scheduled to meet Rahul Gandhi on Tuesday evening or Wednesday morning over the matter even as Telangana Pradesh Congress Committee (TPCC) chief Uttam Kumar Reddy is also meeting Gandhi to finalise its first list of candidates for the polls.

A source close to top Congress leadership in New Delhi however said that it was a tricky situation, as Visweshwar had already been guaranteed the ticket and there was not much they can offer to Karthik and Sabitha, possibly signaling that the duo may go to the TRS.

Elections to 17 Lok Sabha constituencies in Telangana will be held on April 11, 2019. The Election Commission of India has announced that the state will see a single-phase election.

Let’s have a look at Chevella Lok Sabha constituency which presents a unique mix of urban-rural electorate and presents a vibrant and contrasting culture over its seven Assembly constituencies. While some are highly developed and urbanised because of the booming IT industry around Hyderabad, a few others are still soaked in the typical rural atmosphere of green agricultural lands.

Located in Ranga Reddy district, the constituency was carved out of Hyderabad Lok Sabha constituency during the delimitation of constituencies in 2008.

It comprises seven Assembly constituencies — Tandur, Parigi, Vikarabad, Chevella, Maheshwaram, Rajendra Nagar, and Serilingampally. While two constituencies — Chevella and Vikarabad — are reserved for SCs, the remaining are in general category.

Chevella has a highly developed and urbanised area in Serilingampally Assembly segment, comprising IT corridor, Cyberabad, IT Investment Region, Shamshabad International Airport region, and hardware park on one side, and backward areas such as Tandur, Vikarabad and Pargi on the other, presenting a contrasting picture.

The issues faced by people in the constituency are also as divergent as the Assembly segments. In urban areas, there is a sizeable number of voters from Andhra Pradesh and other States, working mostly in the IT sector.

Issues pertaining to agriculture and infrastructure form major issues in rural parts of the constituency.

Jaipal Reddy won the first election from this seat on a Congress ticket in 2009, defeating the then TDP candidate AP Jithender Reddy by a slight margin of 1.71 per cent votes (18,532).

The situation was way too different during the 2014 polls. Though voters in the urban belt of Serilingampally and other Assembly constituencies chose TDP candidates, the rural voters came out in support of the TRS, which fought for separate statehood and achieved it. This resulted in a thumping victory of TRS candidate Konda Vishweshwar Reddy, grandson of former Deputy Chief Minister KV Ranga Reddy, after whom the district was named.

He won the election with a majority of 73,023 votes against nearest rival and Congress candidate P Kartik Reddy. While Vishweshwar Reddy received 4,35,077 votes, Kartik Reddy secured 3,62,054 votes. Due to the rising popularity of the TRS, candidates who won from different political parties too joined the ruling TRS after witnessing people’s verdict in favour of the TRS.

In the aftermath of 2018 Assembly elections, the ruling TRS not only retained power but also registered a landslide victory with 88 MLAs across the State. The party retained five of the seven Assembly seats that fall in the LS constituency, losing two to the Congress. It is evident from the valid votes polled to the TRS that the ruling party had gained popularity when compared to its political rivals.

As against total valid votes of 13,05,844 polled for the Lok Sabha elections in 2014, around 14,15,010 valid votes were polled in the Assembly elections of 2018. Despite sitting MP Konda Vishweshwar Reddy switching loyalties to the Congress just before the elections and supporting the candidates of Prajakutami — comprising Congress, TDP, TJS and CPI — the TRS garnered about 45.84 per cent of total valid votes i.e. 6,48,684 votes during Assembly elections. The TRS received 4,35,077 (33.32 per cent) votes in 2014 Lok Sabha polls. Thus, the vote share of the TRS is up by about 12 per cent.