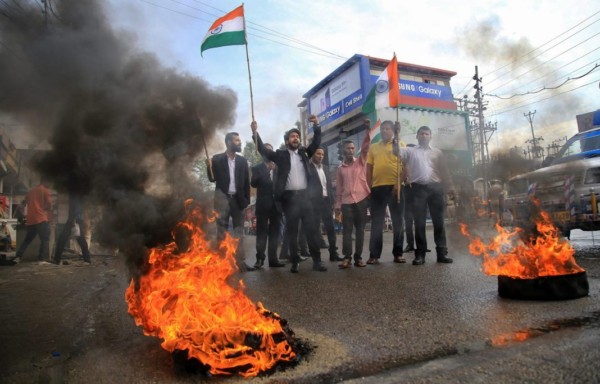 “Politicians, lawyers and fringe groups have come together to fan communal hatred in Kathua after the gruesome crime.”

The brutal gang rape and murder of eight-year-old Asifa, allegedly by a group of Hindu men in Kathua’s Rasana village, has exposed the communal faultlines in the Kathua and Jammu regions of Jammu & Kashmir.

A new radical Hindu group called Hindu Ekta Manch, backed by BJP ministers in the Mehbooba Mufti government, Right-wing fringe elements, lawyers and bar associations have come together to communalise and politicise the crime. The police investigation, they allege, is “unfair and biased” and an attack on Hindus.

The Jammu & Kashmir Police crime branch Monday filed its chargesheet in the case against eight arrested accused, including a juvenile.

Here’s a who’s who of those at the forefront of the protests against the investigation.

The Hindu Ekta Manch was launched with three people at its helm, in reaction to a massive agitation and highway blockade by the Bakerwal community that Asifa belonged to, a day after her mutilated body was found on 17 January.

It is suspected that local Congress leader Kant Kumar, a former sarpanch of Kootah village, along with Bhagmal Khajuria and Sudesh Kumar Sharma – alleged aides of state forest minister and BJP leader Chaudhary Lal Singh — started the group with politics on their mind. They wanted to mobilise local Hindus, mainly Khajuria Brahmins and Rajputs, to counter protests launched by the Bakerwals.

Soon after, advocate Vijay Sharma – a practising lawyer and BJP state secretary – was appointed president of the manch.

It is learnt that the group was initially supportive of the crime branch probing the case, while Asifa’s parents had called for the probe to be high-court monitored.

However, once the crime branch arrested the prime accused, a 28-year-old special police officer named Deepak Khajuria, and then others, all of whom turned out to be Hindus, the manch changed course, calling the probe “biased”, and demanding a CBI investigation into the case.

The manch took out several protest marches, including a ‘peace rally’ with the Tricolour in February, and another bike rally early last month.

While it is suspected that lower-rung politicians from across parties are supportive of the manch, fingers have been pointed at the BJP – even though it has officially distanced itself from the group – after BJP state cabinet ministers Chaudhary Lal Singh and Chander Parkash Ganga attended rallies organised by the manch and pledged their support to the demand for a CBI investigation.

They also called for an end to “wrongful” arrests of the accused, showing a lack of support for the state police and causing embarrassment to chief minister Mehbooba Mufti.

Speaking to KhabarLive, Kant Kumar said it is obvious that the crime branch is acting on an “agenda” at the behest of CM Mufti.

“We have to decide the next course of action, but in all likelihood, we will file a PIL in the high court on the unfair investigations launched by the crime branch,” Kumar said.

The manch had launched a massive protest in the villages of Kathua and Samba Wednesday, in addition to a Jammu shutdown called by the Jammu & Kashmir High Court Bar Association (Jammu). “We had kept the highway blocked for six hours,” said Kumar, adding that the manch has massive support from all villages of the region.

While bike rallies are considered an expensive affair, Kumar denied the manch had received any external funding. “We organised the rally on our own. People volunteered to come out with their bikes,” he said.

The Hindu Ekta Manch derives support from the Jammu & Kashmir High Court Bar Association of Jammu, which has supported its demand for a CBI probe into the case.

The bar has been protesting in support of this demand since 4 April, and had called Wednesday’s Jammu bandh.

In a statement, the bar association put forth other demands too, including the “deportation of illegally settled immigrants in and around Jammu”.

The association has in the past alleged that the PDP-BJP coalition government had “deliberately created a hostile situation in an attempt to…disturb the harmonious atmosphere and character of Jammu region”, adding that its demands are in the interest of the safety, security and peaceful survival of the “nationalist people of Jammu region”.

The support was evident with the Kathua Bar lawyers creating a ruckus Monday, chanting ‘Jai Shri Ram’ and ‘Crime branch go back’ at the court premises to stop the police from filing its chargesheet.

In the ground report from Kathua, ThePrint had reported that other fringe groups were trying to disturb the communal peace a month after Asifa’s rape and murder.

The Hurriyat Conference had also released a statement earlier, stating that Jammu’s Muslim community was being subjected “to severe harassment”. It also demanded stringent action against those involved in the heinous crime. #KhabarLive