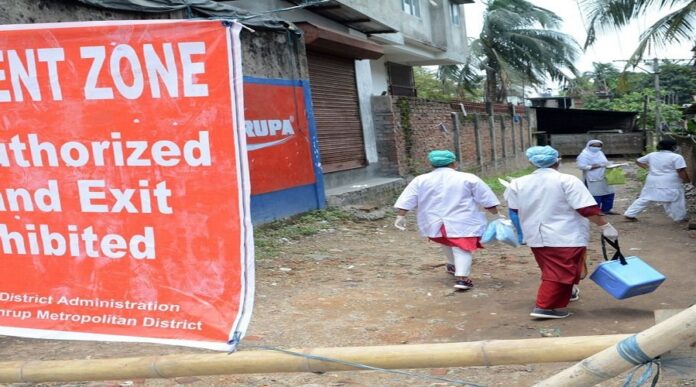 As the Telugu States of Telangana and Andhra Pradesh passes the grim milestone of thousands pf virus cases and new hotspots emerge in hamlets and villages, experts are worried infections will now rise exponentially in these states, overwhelming its under-prepared hinterland.

In the remote Raikal village under Jagtial district in the Telangana where 206 people have been found positive in the last month.

In Katapalli village in Andhra Pradesh, nearly 200 people were infected and the area locked down for almost 50 days before the outbreak was controlled.

It’s still early days for Katapalli, where hundreds more risk becoming infected. Many villagers who were mostly asymptomatic were afraid to be tested over concerns they’d be forced to leave their families to be quarantined in the local Covid-19 care center.

Living in a strictly-policed containment zone for more than six weeks meant their fields were neglected and many could not venture out to find work. Although restrictions have lifted in most areas, money remains tight.

Authorities struggled to check the spread of the virus in the village, with its over crowed houses in narrow lanes, said Mallesh Reddy sarpanch, the main administrative officer, where the village is located.

“This village has the characteristics of an urban slum,” Reddy said, where it is a challenge to provide support to citizens.

The disease is now widespread outside metropolitan areas, said Seshaiah, assistant professor at the School of Public Health in Andhra Pradesh.

“We need commitment and collective sacrifice from people of rural areas to keep contact diaries, symptom diaries, and to not feel stigmatized if they test positive or have symptoms so that the disease does not infest villages like an enemy in the dark.”

Emerging rural hotspots, where health care infrastructure is fragile and living conditions are already difficult, pose a challenge to the governments of KCR and Jagan as it attempts to rein in infections and kickstart the state’s ailing economy.

The epidemic in Telugu states is now one of India’s fastest-growing, with more than 10,000 new cases added in the total number of confirmed infections.

“Even if people need hospitalization, they are unlikely to be able to reach a COVID facility in time,” said Ramana Laxminarayana, director of the Center for Disease Dynamics, Economics & Policy in Hyderabad.

“It is going to be a tough few months ahead but there is effectively no brake on the virus and I don’t expect a decline for quite some time.”

Several districts in Telugu states which have sizable rural populations are highly vulnerable to new infections, according to a Lancet study. And this vulnerability extends beyond infections to their socio-economic conditions and the ability of the local health system to handle the challenge of surging infections.

ALSO READ:  No Relaxation On Telangana Lockdown, Extended Till May 7, Swiggy, Zomato Banned

“Under testing may be an even more serious problem in rural areas due to lack of sufficient testing infrastructure,” said Harish Rao, an economist and public health policy analyst who consults for the World Health Organization. “The increasing presence of undetected cases can potentially lead to super spreader events which, in turn, can have devastating consequences.” He expects India to report as many as three million infections by the end of the month.

Rao also believes the worst is yet to come.

“This is a long and painful crisis till we have a vaccine,” said Rao. “I know we are all tired but we cannot surrender.” #KhabarLive #hydnews